There are nearly four times as many Sunni Islamic militants operating across the world today as there were when the Sept. 11 terrorist attacks occurred, according to a study released Tuesday.

The report from the Center for Strategic and International Studies (CSIS), a Washington foreign policy think tank, estimates up to 230,000 Salafist fighters are spread out among 70 countries, with the largest concentrations in Syria, Afghanistan, Pakistan and Iraq.

That figure, while down slightly from a high in 2016, remains at a near-peak level over the past four decades, according to CSIS. As a point of comparison, there were an estimated 80,000 Sunni militants in 2001, when the U.S. launched a global war on terror in response to 9/11.

The CSIS study draws its estimate of worldwide jihadist ranks from multiple government and non-governmental databases, including the State Department’s Foreign Terrorist Organizations List and the National Consortium for the Study of Terrorism and Responses to Terrorism. While numbers vary by organization, all indicate that U.S. counterterrorism policy has failed to contain, and in some cases exacerbated, the worldwide spread of jihadist ideology, according to the authors of the CSIS report.

CSIS focused its analysis on Salafist militants, who follow what they consider to be a “pure” form of Sunni Islam. Salafist groups are particularly dangerous because they consider America and most of its Western allies to be an enemy, and they are typically more willing than other Islamic groups to kill civilians.

Most of these fighters fall under the umbrella of al-Qaeda, which perpetrated the 9/11 attacks, or the Islamic State, which has risen out of the chaos of the Iraq War to become the deadliest terror group in the world. ISIS, despite significant territorial losses, has seen its ranks swell with affiliates across Africa, the Middle East and South Asia. (RELATED: UN: There Are Still Up To 30,000 ISIS Fighters Scattered Across Iraq And Syria)

“This data suggests that there is still a virtually unprecedented pool of Salafi-jihadist and allied fighters, even with the Islamic State’s decline in territorial control,” the CSIS report stated. 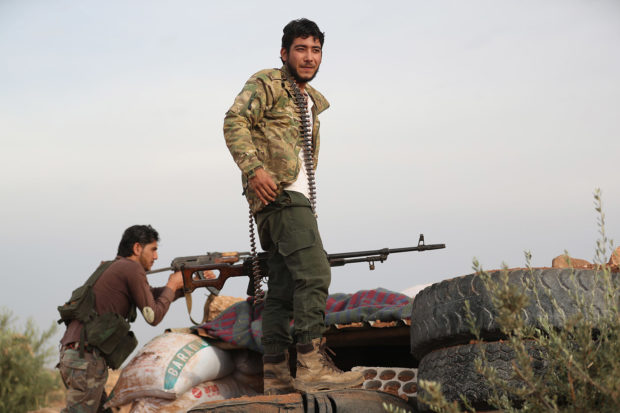 A Syrian rebel-fighter from the National Liberation Front (NLF) gather on the front line with regime forces inside the demilitarized zone, in the south east of Idlib province on October 9, 2018. OMAR HAJ KADOUR/AFP/Getty Images

The CSIS report adds to a growing body of evidence that Washington’s military-oriented response to jihadist groups is merely addressing a symptom, but not the cause, of Islamic radicalism. As the report notes, Salafist-jihadist groups have flourished in countries with weak governance structures and sectarian divisions — problems the military is ill-suited to solve.

“An important — perhaps the most important — component of Western policy should be helping regimes that are facing terrorism
improve governance and deal more effectively with economic, sectarian, and other grievances that have been manipulated by Salafi-jihadist groups,” the report concluded. “Policymakers need to better understand the specific political and other factors that allowed groups like the Islamic State and al-Qaeda to establish a foothold and to focus U.S. diplomatic and development efforts on better addressing them.”

1
'Mommy And Daddy' Escort 'Antifa Kid' Suspected Of Kicking Off Riot To Turn Himself In
US
2
At Least 5 Police Officers Shot, 1 On Life Support As Rioters Across The Country Attack Law Enforcement
US
3
Tucker Carlson Rips Jared Kushner: Trump's Instincts 'Have Been Subverted At Every Level'
Media
4
Tucker Carlson Hammers Trump, Pence And Haley For Riot Responses: 'So Called Conservative Leaders Joined The Left's Chorus'
Politics
5
Americans Arm Themselves Against Rioters As America Faces Seventh Straight Night Of Violence
US