The protests “have been at or near the top” of the list of accounts that Alliance for Securing Democracy monitor, the group’s social media analyst, Bret Schafer, told reporters. “That’s a pretty strong indication that there is interest in amplifying the conflict” for worldwide audiences.

Much of the content from the tweets is coming from Russian-owned outlets RT and Sputnik. Some of their reporting has been splotchy at best, according to Bloomberg News. For instance, both outlets falsely reported that police unions were showing their allegiance to the Yellow Vest movement.

French officials held out hope that French President Emmanuel Macron’s decision Thursday to nix an unpopular carbon tax might mitigate some of the anti-tax sentiment. 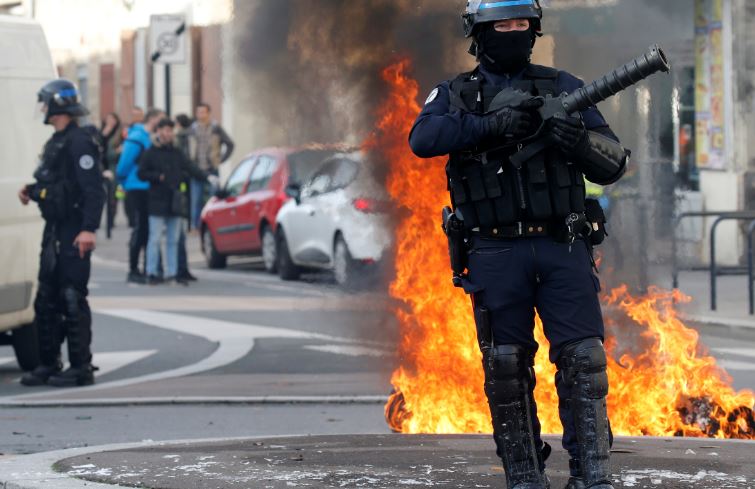 A French riot policeman stands next to a burning trash container as youth and students protest against reform plan in the streets of Bordeaux, France, December 5, 2018. REUTERS/Regis Duvignau

Those hopes were dashed after police arrested more than 700 people Saturday morning and searched protesters for items like the now-famed yellows vests they wear to signify allegiance to the country’s working class. Four people have died and scores more wounded during the weeks-long protests.

The protests, which started in mid-November, are unusual as none of them were sanctioned by the country’s powerful unions or politicians – they are a mixture of right-wing and left-wing populist elements. None of this strife bodes well for Macron, whose approval rating is low.

Only 26 percent of French people say they have confidence in the embattled president, according to a poll from Kantar Public, which surveyed 1,000 people in October. Many French citizens see the carbon taxes as an example of Macron’s inability to understand the plight of the country’s working class.

Broderick did not respond to questions about why the article appears to blame the tools French citizens used to organize rather than the circumstances giving rise to their anger. (RELATED: Buzzfeed Blames French Riots On Facebook, Not France’s Sky-High Carbon Prices)