Pichai emphasized the apolitical nature of the algorithms that determine search results for Google customers and downplayed Republicans’ fears that Google employees banded together to alter results for political purposes.

“I know Google’s attitude, ‘the algorithm made us do it,'” Republican Ohio Rep. Steve Chabot asked Pichai early in the hearing. “But I don’t know that I buy that. How do you explain this apparent bias on Google’s part against conservative points of view, against conservative policies? Is it just the algorithm or is there more happening there?” (RELATED: Google Employees Sought To Block Breitbart From Ads, Emails Show)

“But what is important here is we use the robust methodology to reflect what is being said about any given topic at any particular time,” Pichai said. “And we try to do it objectively using a set of rubrics. It is in our interest to make sure we reflect what’s happening out there in the best objective manner possible. I can commit to you and I can assure you we do it without regards to political ideology. Our algorithms have no notion of political sentiment.” 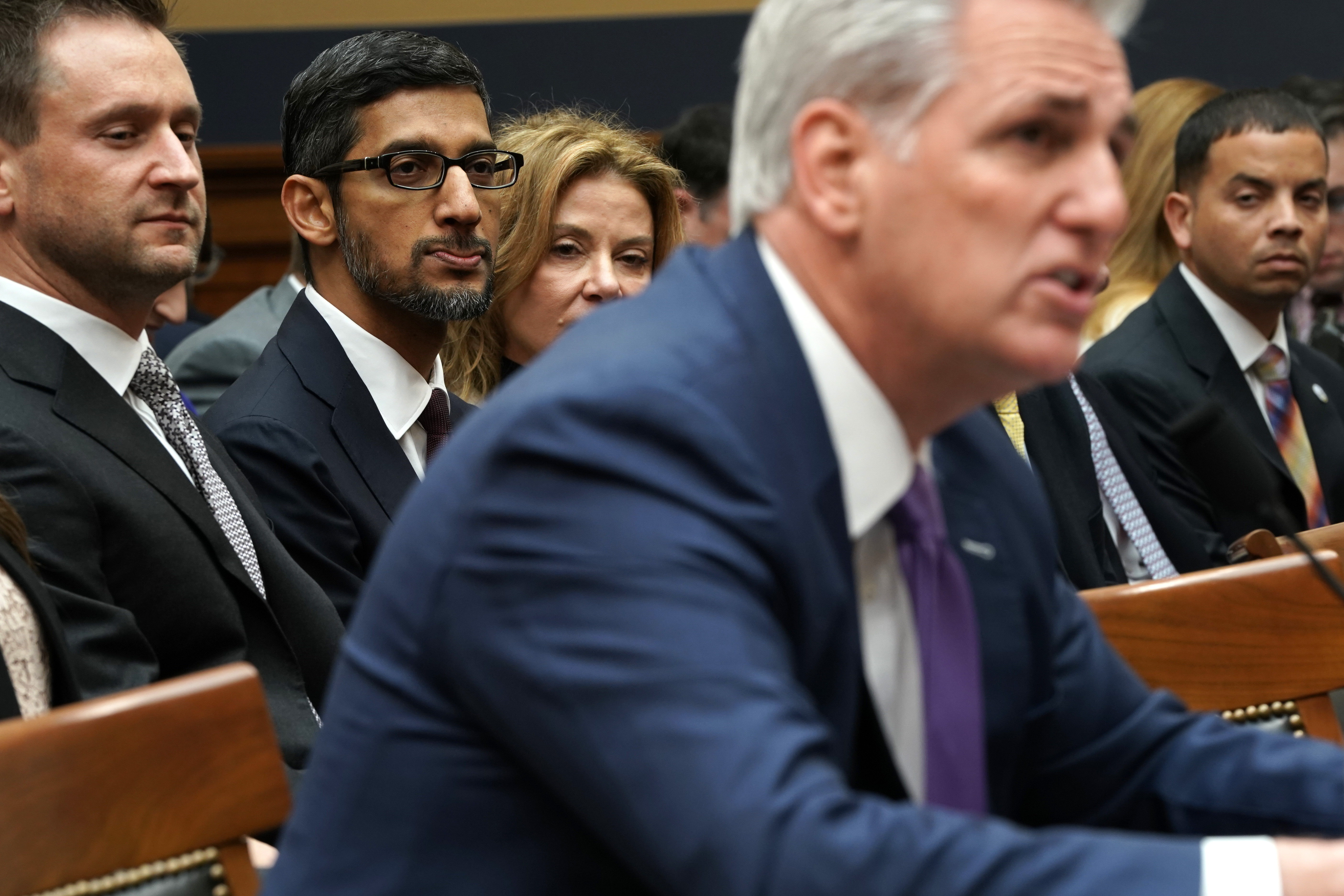 Republican Florida Rep. Matt Gaetz pushed Pichai to explain why Google had not investigated whether Google employees had manipulated search tools or other Google products in light of communications like emails about Breitbart that leaked Monday.

“How can I have confidence that you’re protecting the sanctity of your system when you don’t even know your employees are getting together on your own company’s infrastructure to talk about political activity?” Gaetz asked Pichai.

“At any given moment we assume that somebody may be acting in bad faith, and that’s how we have designed our systems with all the protections in place,” Pichai said.

“According to the Wall Street Journal, 90 percent of all Internet searches go through Google. That is power,” McCarthy said “It comes with responsibility. Mr. Pichai, it was necessary to convene this hearing because of the widening gap of distrust between technology companies and the American people.”

The hearing was titled “Transparency & Accountability: Examining Google and its Data Collection, Use and Filtering Practices.” It was originally scheduled for Dec. 5, but was pushed back because of former president George H.W. Bush’s funeral.

Republican operative Roger Stone and Alex Jones of InfoWars were in the audience at the hearing, reported C-SPAN.

Some public figures on the right have come down hard on Google. Republican Arizona Rep. Paul Gosar called on the Department of Justice to investigate Google on Nov. 30, and Republican Missouri Sen.-elect Josh Hawley called for Google execs to explain themselves “under oath.”

Republican lawmakers also criticized Pichai for skipping a Sept. 5 Senate Intelligence Committee hearing on social media and foreign election meddling. Facebook and Twitter executives testified, and an empty chair with a nameplate that said “Google” sat where the company’s representative would have been.

Pichai, 46, has worked for Google since 2004, according to the Wall Street Journal.