I dare say anyone who’s experienced the pleasure of popping primers has some sorta’ semblance of a rootin’, tootin’, shootin’ “cowboy” in them. We all fantasize about being a fast-draw hip-shootin’ “good guy,” right?

Those who consider themselves a true handgunner should own at least one “thumb-cocker,” and Bill Ruger recognized this. Today, Ruger enjoys a brisk business selling a slew of single actions in many different styles and calibers. These rough, tough and ready sixguns are a favorite among hunters, outdoorsmen and ranchers for their durability, reliability and accuracy.

After Bill Ruger designed his Single-Six .22 sixgun, the .357 Flat Top Blackhawk quickly followed in 1955. Using a heavier top strap and coiled piano wire springs at Elmer Keith’s urging, the Blackhawk was sturdier and stronger than its Colt cousin. The Blackhawk also came with adjustable rear sights and a ramped front sight. The following year, 1956, the Flat Top .44 Magnum was introduced, followed by the Super Blackhawk in 1960. It was a whole family.

In 1973, the New Models were released with transfer-bar safeties, when less-informed yahoos loaded six rounds in the cylinders, causing the hammer to rest on a live cartridge. Load the old models with five beans in the wheel and rest the hammer on an empty chamber.

Finally, a full-sized Vaquero, a bigger and more robust Colt clone of sorts, was released. Featuring fixed sights and a lot of nostalgia, Ruger chambered them in .357, .44 Mag. and, my favorite .45 Colt. Bisley grips were added to some models, while Hunter Models had scope ring cutouts on the barrel.

Since customers always want more, it turned out some of them wanted a Colt-size framed version of the Vaquero. Never one to ignore their customers, Ruger responded with what has become known as the “New Vaquero.” This gun has the strength Ruger is known for while being approximately the same size as the Colt SAA.

Best Of Both Worlds

Ruger recently released a Lipsey’s Exclusive 4-5/8″-barreled New Vaquero in a dual-cylindered package, chambered for 9mm and .357 Mag. to give shooters maximum utility and versatility. Common 9mm rounds, .38 Spl. ammo and .357 Mag. cartridges can all be shot from this perfectly sized packing pistola’ while one is afield. Simply slipping the cylinder pin and swapping cylinders is all that’s necessary when one wants to shoot 9mm or the .38/.357 Maggie.

The mid-framed Ruger New Vaquero comes with a short 4 5/8″ barrel with fixed front blades and hog trough rear sights for statue-like stability and ruggedness. The stocks are gunslinger-style sculpted hardwood, which feel good in the hand. Total empty weight is 43 oz. and overall length is 10.375″.

This sixgun has Ruger’s transfer-bar safety, so six cartridges can be carried safely without fear of firing should the gun be dropped. Also, the pre-1962 XR-3 Grip Frame is used for a true “Colt-like” feel of the famed SAA. This is a gem of a gun for any outdoorsman who wants the ability to shoot a multitude of ’munitions.

Many people scoff at the crude fixed sights of a single-action sixgun, myself included. Until you line-up these simple sights, you forget just how good the sight picture actually is. Crude as they are, I’m always amazed at how the bullets seem to cluster on their own. Perhaps low expectation takes the pressure off of us and we just relax and enjoy shooting it?

I had some newly released SIG SAUER V-Crown and Buffalo Bore Outdoorsman ammunition on hand for testing. Most loads shot 2″ to 3″ low, while others were pretty much dead-on. Whatever load you choose to go with, fret not — there’s plenty of front sight to file down to zero your favorite load. Windage was dead on; not an easy task when you consider the number of guns Ruger assembles!

Accuracy was everything one could expect from a Ruger sixgun. Using a 4″x6″ carpeted block with a sandbag rest, most groups were in the 1″ to 2″ range at 25 yards for five shots. Caliber did not influence the consistency in which the New Vaquero shot, whether it was 9mm, .38 Spl. or .357 Mag. All shot extremely well. 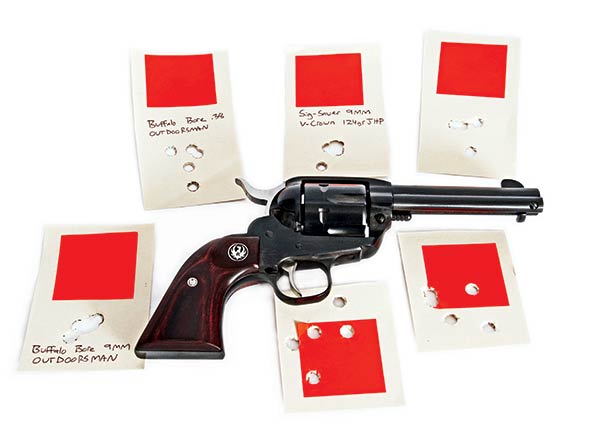 Lastly, all but one factory load exceeded the advertised velocities, and it barely fell short. For a “shortie” 4 5/8″ barrel, that’s mighty impressive and speaks volumes of the chamber, cylinder throats, barrel/cylinder gap and barrel of the gun. Well done, Ruger.

If you’re looking for a light, packable and rugged shooter with the versatility of shooting three different cartridges accurately, the Ruger New Vaquero is tough to beat. You won’t just be whistlin’ Dixie when you strap on this thumb-cockin’ six-shooter — you’ll be whistlin’ a whole new tune! MSRP on this New Vaquero is $949.