Minnesota Democratic Rep.-elect Ilhan Omar is drawing fire for a tweet she posted Tuesday of Vice President Mike Pence along with the words, “Jesus take the wheel!”

Omar’s headline also included the hashtag #BorderWall. The picture of Pence with his eyes closed was taken during Tuesday’s explosive meeting between President Donald Trump, House Minority Leader Nancy Pelosi, and Democratic Sen. Chuck Schumer on the topic of border wall funding. Along with being a familiar saying to many Christians, the phrase “Jesus Take The Wheel,” is also the name of country superstar Carrie Underwood’s first number one song. 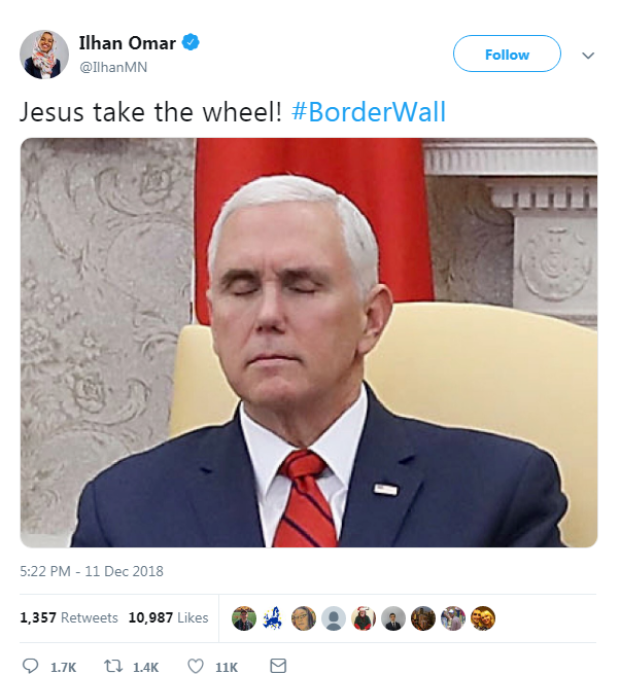 The tweet was seen by many as an attack on Pence’s Christian faith. (RELATED: Laura Ingraham Rips Incoming Far-Left Congresswomen For Stance On Israeli-Palestinian Conflict)

It’s called a blink. Eyes do it daily. Silly and sad. SMH

Yeah, make fun of someone for their faith. Good job.

I wonder how this would go if someone mocked this Muslim soon-to-be Congresswoman about her religion? https://t.co/NeR6L8IvrU

I wonder what would happen if Pence made fun of Omar’s belief in Muhammad? https://t.co/V3FsSbwz8q