According to a new poll, Americans see “government” as the biggest problem facing the country followed by immigration.

Gallup polled Americans on 13 major issues facing the nation, with 19 percent saying that government was the biggest problem, followed by immigration at 16 percent and “unifying the country” came in third place at 8 percent. (RELATED: Woman Who Climbed Statue Of Liberty To Protest Trump’s Immigration Policy Convicted) 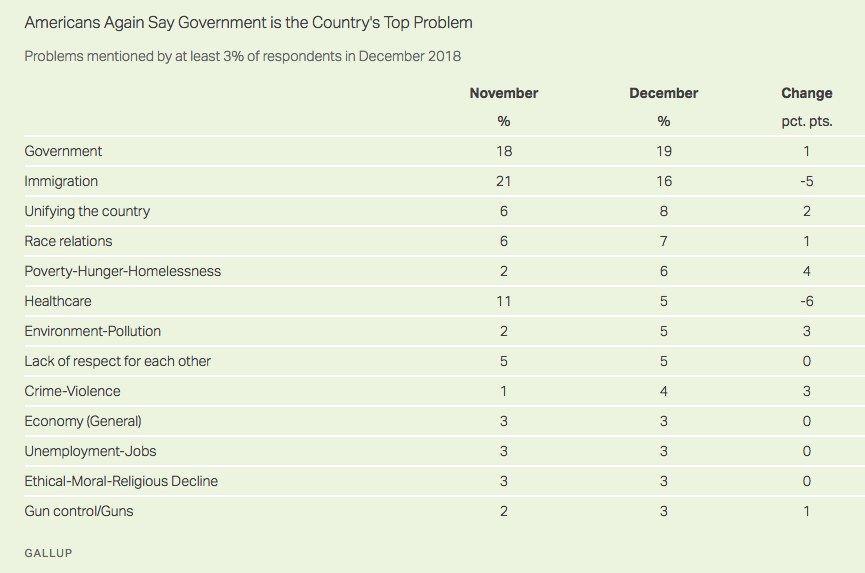 According to Gallup, the government is frequently mentioned by Americans as the biggest problem facing the country:

These data come from a Gallup Dec. 3-12 survey, conducted as a looming budget impasse between Republicans and Democrats threatened to shut down the government. The government has commonly been cited in recent years as the most important problem facing the country, with the problem having received or been tied for the most mentions – 22 times in the last 24 months. The current 19 percent who say it is the most important problem is well below the all-time high of 33 percent who cited the issue in October 2013, during a partial shutdown of the Federal government, but is in line with the 22 percent average who have noted the government this year.

President Trump got elected on promises to “Drain The Swamp,” and secure the border. Gallup’s new poll suggests that Americans are still overwhelmingly prioritizing those issues and may not be too eager to see Trump once again cave on his promise to build a wall alongside the southern border.