Pardon the pun, but here’s the skinny on the newest additions to the GLOCK line, the “Silver Slimline Series.” We were given a chance to get a first look at these two new pistols and wring them out before the official release date today, and I was admittedly a bit surprised when I got them. When I heard that there were two new GLOCK pistols coming my way, my first thought was “must be a new texturing pattern on the frame” or “maybe there’s another pistol with forward cocking serrations on the slide.” So, when I opened up and found these two skinny pistols in there, I was intrigued to say the least.

What I received was the G48 and the G43X, described as members of GLOCK’s “Silver Slimline Series.” Designed for everyday carry, the Silver Slimline 9mm pistols feature slimline, compact frames with 10+1 capacities matched up with silver slides with an nPVD finish. As described in the accompanying literature, the pistols sport “many” Gen5 features, but do not bear official Gen5 markings. The G48 features a “compact” slide configuration, while the G43X has a subcompact slide. 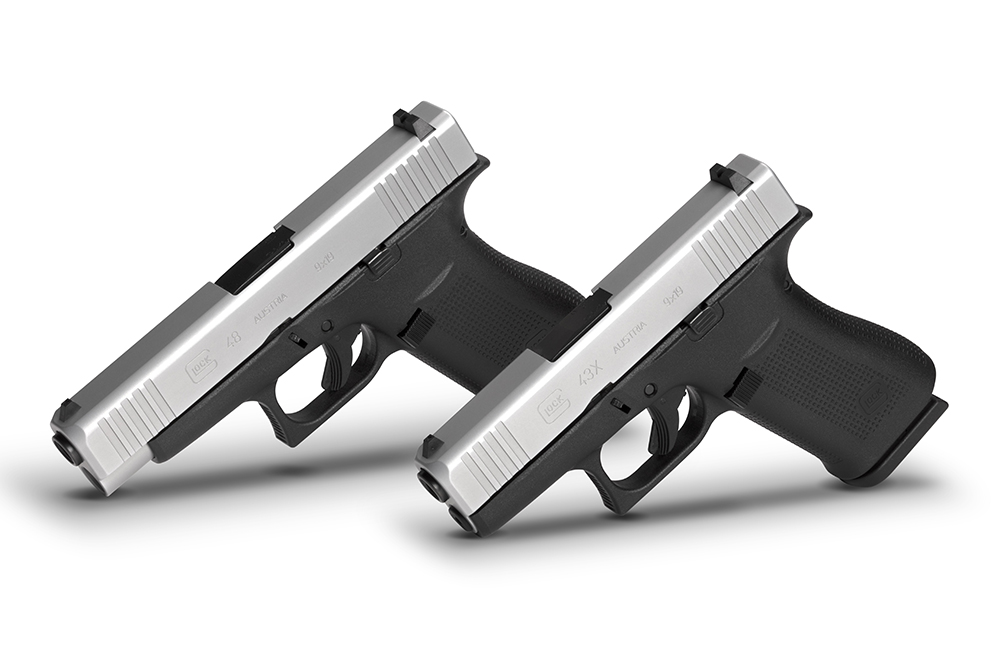 The new 9mm Silver Slimline Series pistols from GLOCK — the G48 at left and G43X right — give you a 10+1 capacity in a skinny, CCW-ready package.

The easiest way to understand the G48 is to think of a roughly G19-sized pistol, but lighter and slimmer. If you like the handling characteristics of the G19 but want one that tucks in tighter against the body and carries lighter, this one’s for you. Specifically, the G48 measures in at an overall width of 1.10″ (compared to the 1.26″ of a Gen4 G19) and gives you 10 rounds in the magazine rather than 15 with the G19. The result is a slimmer and lighter pistol than the G19 — by roughly 3 oz. empty and around 5 oz. loaded — but one with similar overall handling characteristics. 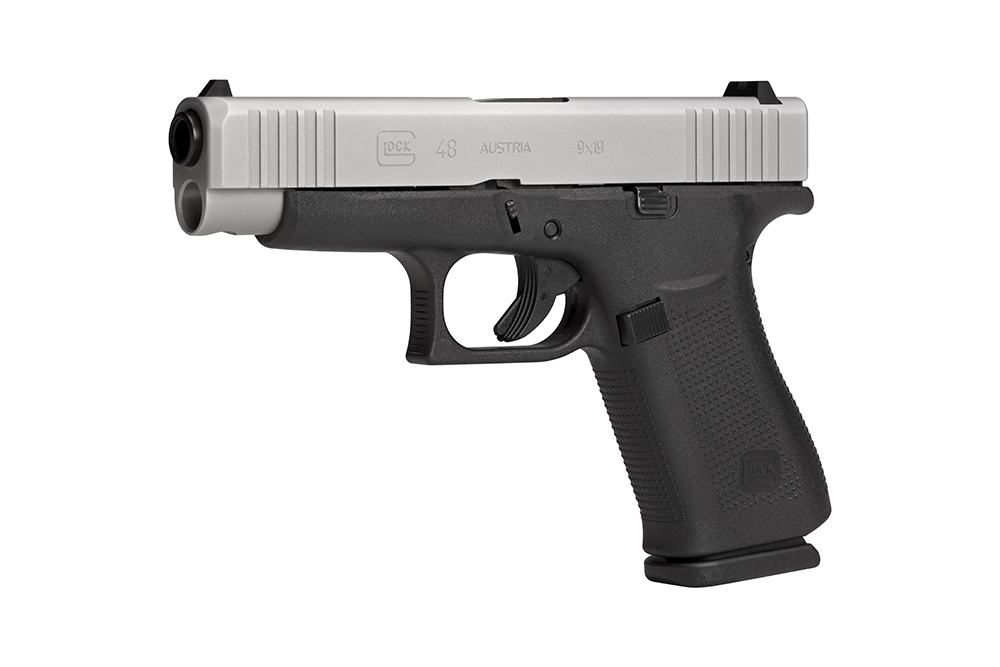 The G48 is roughly the same size as a G19, but slimmer and lighter. Note the silver nPVD finish.

Now, your first question may be, with a round as slim as the 9mm, why isn’t this pistol even skinnier than it is? I suspect that GLOCK decided that the Goldilocks “just right” approach to the slimness of the Silver Series 9mm’s was the best approach. Close examination of the magazine reveals that it has a staggered column of 9mm rounds. The result is a pistol that is slimmer than the true double-column G19, but one with a grip that is not too narrow and packs in more rounds than a true straight single-column magazine would. Basically, if you like the width of the subcompact 9mm G43’s grip, you’ll like this one. 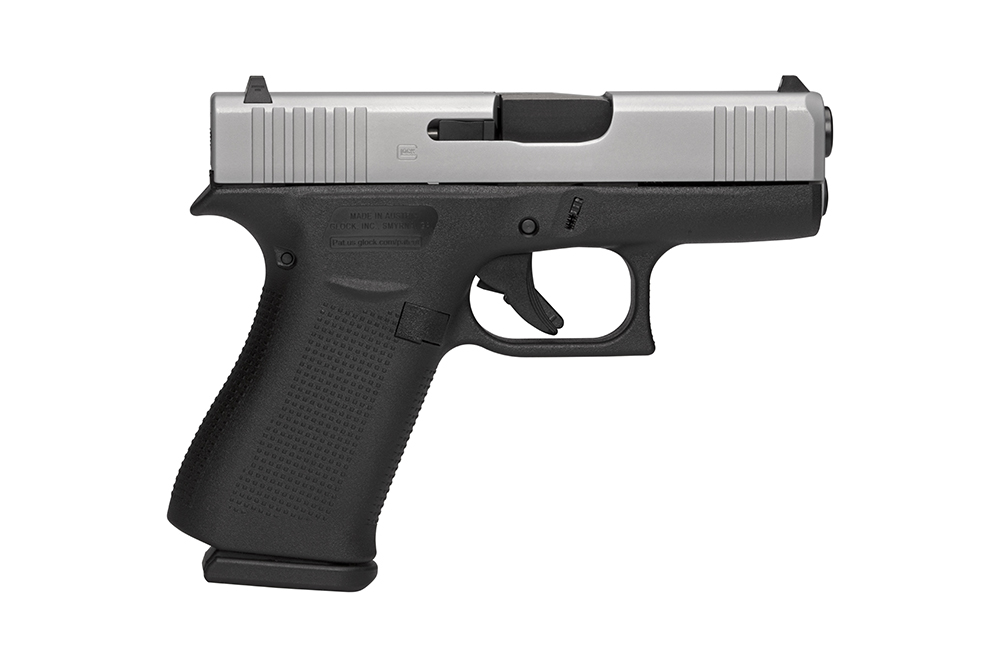 The G43X takes the basic G43 configuration and gives you a longer grip and greater capacity. Compact, but easy to shoot well.

Speaking of the G43, the G43X is a new variant of that popular “pocket pistol,” but featuring what appears to be the same frame as the G48. In fact, one thing I noticed about the G48 frame’s profile compared to the G19 was the shortened dustcover area, which on the G19 extends to the end of the slide. This would appear to have been done to allow both the G48 and the shorter G43X to share the same frame and 10-round magazine system.

If you want to know what the dimensions of the G43X are, basically consider a G43 with a longer grip frame — specifically about .80″ longer. The slide and barrel length are the same between the two pistols, but the weight of the G43X bumps up about ¾ of an ounce between comparable empty guns and about 2½ oz. between loaded ones. From a handling standpoint, you get a much easier to grip and shoot pistol with the G43X over the G43, but one that is most definitely not going to disappear into a pocket as easily as the G43. 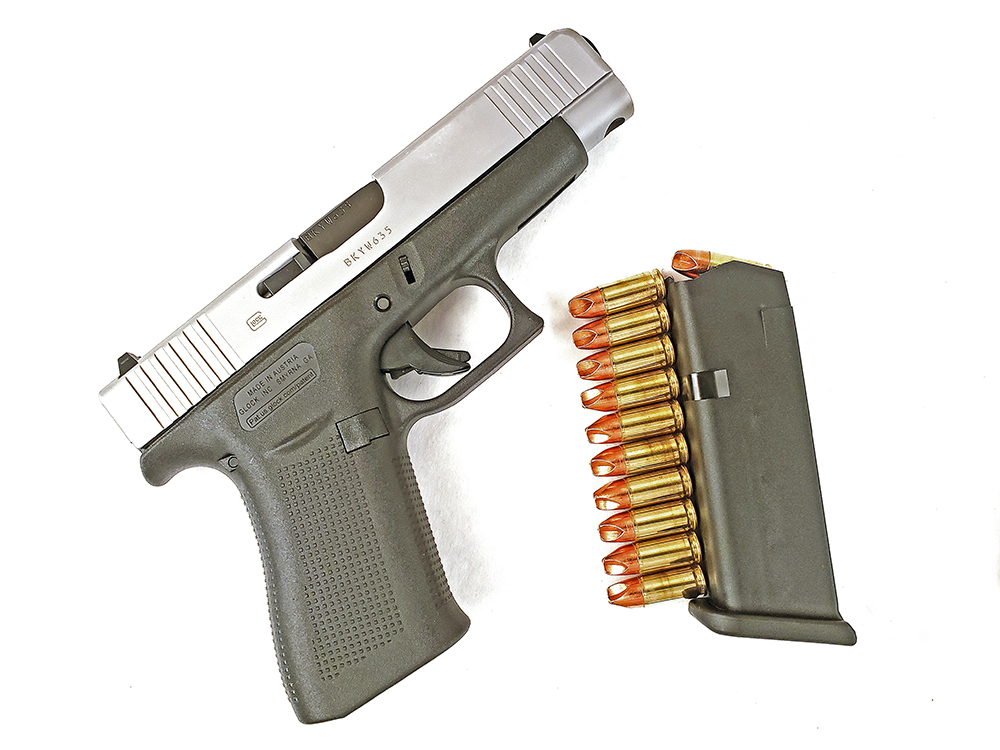 The heart of the new slimlines is the 10-round magazine that staggers the rounds to fit more. Note how 10 rounds of non-staggered 9mm would fill up the entire mag body with no room for spring or follower.

Have you always liked GLOCKs but thought they were too “chunky,” with you pining for something a little more svelte? Were the slimline subcompacts just too itty-bitty for your tastes? Then the new Silver Slimline Series 9mm pistols from GLOCK should definitely warrant a close look. Packing in 10+1 rounds of 9mm in portable and — most importantly — slim packages, you can have a great GLOCK with a much more narrow view of CCW.

1
Black Firefighter Spent His Life Savings To Open A Bar. Then Minneapolis Looters Burned It Down
US
2
North Carolina Gov. Cooper Stands Ground On Hosting Republican National Convention
Politics
3
Transcripts Of Michael Flynn's Phone Calls With Russian Ambassador Have Been Released
Politics
4
'If Anybody Needs To Be Fact-Checked, It's The Media': Kayleigh McEnany Unloads On Jim Acosta
Media
5
Former Officer Accused Of Killing George Floyd Arrested, Charged With Murder And Manslaughter
US