Cardinal Donald Wuerl said Tuesday he “forgot” he knew about allegations against former Cardinal Theodore McCarrick after months of denying he knew anything.

Wuerl issued an apology Tuesday to former priest Robert Ciolek, who went public with the fact that he told then-bishop of Pittsburgh Wuerl about McCarrick’s alleged abuses of seminarians in 2004, 14 years before McCarrick would ultimately be suspended for allegedly groping an altar boy.

Wuerl and the archdiocese of Washington, D.C., initially claimed Jan. 10 he had not spoken about Ciolek’s allegations to protect the former priest’s identity, but Tuesday chalked it up to a “lapse of memory.” (RELATED: Pope Francis Accepts Cardinal Wuerl’s Resignation, Calls His Actions Justified)

“Nonetheless, it is important for me to accept personal responsibility and apologize for this lapse of memory. There was never the intention to provide false information,” Wuerl said in a Tuesday letter, according to The Washington Post.

Wuerl, however, overtly denied ever having heard rumors of McCarrick’s abuse even after Ciolek chose to go public.

CBS, for instance, asked Wuerl if he was “aware of rumors Cardinal McCarrick was having relationships with other priests?” Wuerl replied “No, no.”

Wuerl repeated in his Tuesday letter he kept silent for 14 years about Ciolek’s allegations of McCarrick’s inappropriate behavior with seminarians, after reporting it to the apostolic nunciature, out of respect for Ciolek’s request for privacy. He also said he apologized to Ciolek, whose repeated requests for a meeting with Wuerl were refused until Wuerl talked with him over the phone Tuesday.

Ciolek, who first went public about his allegedly abusive experience with McCarrick in July 2018, said he did not believe Wuerl at all.

“In the end, it’s lacking in truth and substance. I do not believe for one moment that he forgot. I do not,” Ciolek said.

Ciolek said Wuerl apologized for the abuse he suffered at the hands of other clerics, but never sincerely apologized for his own role in covering up McCarrick’s alleged abuses and thereby denying Ciolek healing.

“But substantively it doesn’t all add up. He’s shown himself to be better at expressing sorrow for actions of others. But he remains unable or unwilling to acknowledge the truth of his own actions,” Ciolek added.

Despite Wuerl’s insistence they remained silent about Ciolek’s allegation out of respect for his confidentiality, documents concerning Wuerl’s 2004 request to bring Ciolek’s allegation to Vatican authorities appear to cast doubt on that claim. Ciolek responded to Wuerl’s request, saying Wuerl could in fact share the allegations, but asked that Wuerl not use Ciolek’s name in the report.

But Wuerl never asked Ciolek if he could publicly share his allegation without identifying Ciolek, and while the D.C. archdiocese also used Ciolek’s request as justification for their silence, Ciolek only made his request to the diocese of Pittsburgh. The D.C. archdiocese never contacted him. 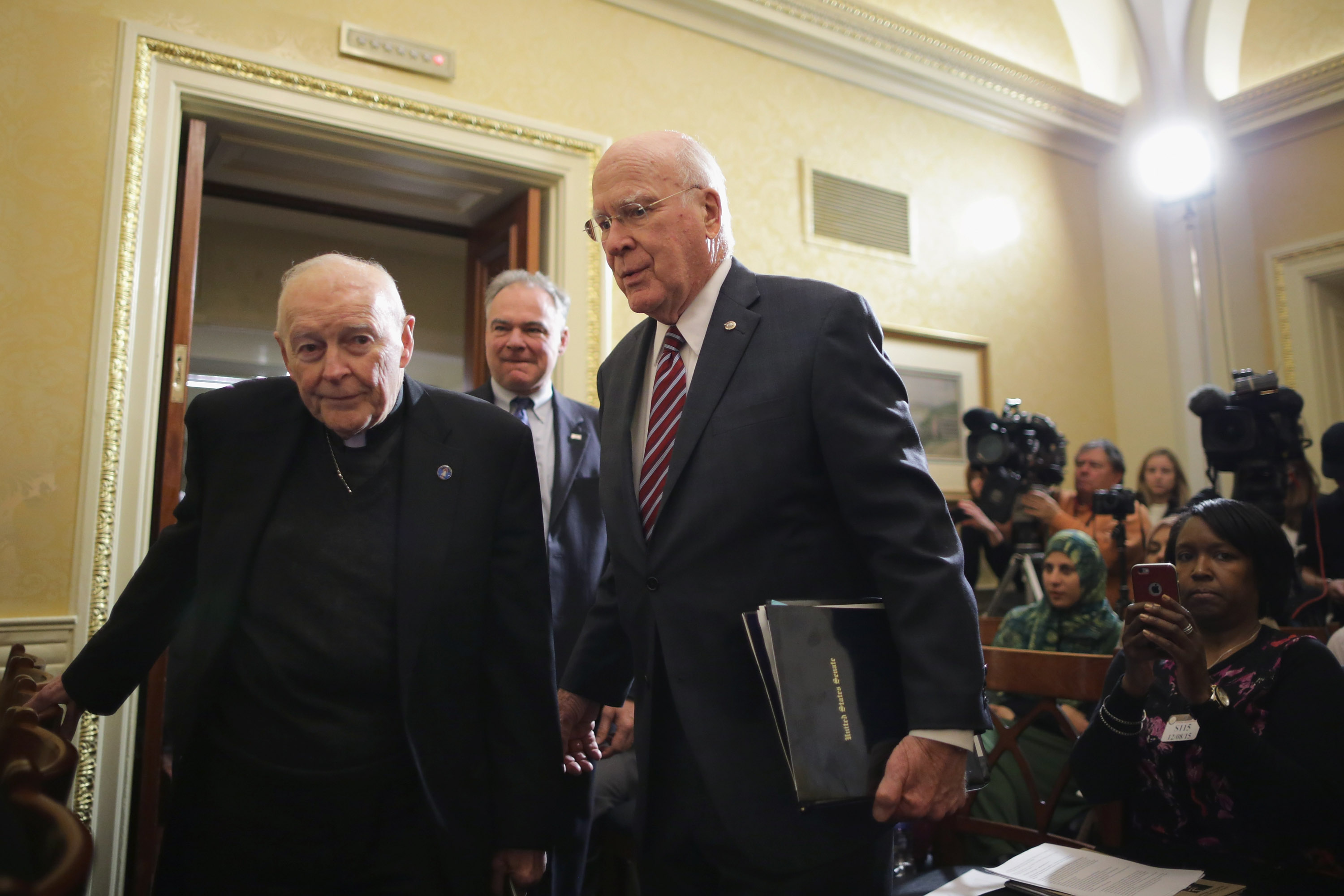 WASHINGTON, DC – DECEMBER 08: Sen. Patrick Leahy (D-VT) (R) and Cardinal Theodore McCarrick arrive for a news conference with national religious leaders to respond to attempts at vilifying refugees and call on lawmakers to engage in policymaking and not ‘fear-mongering’ at the U.S. Capitol December 8, 2015 in Washington, DC. (Photo by Chip Somodevilla/Getty Images)

The diocese of Pittsburgh confirmed Ciolek’s request for confidentiality, but also acknowledged that Ciolek gave the diocese permission in November 2018 to publicly comment on his allegations to the media.

“Mr. Ciolek asked that the allegation regarding then-Cardinal McCarrick be shared only with ecclesiastical — that is — Church authorities,” a statement from the diocese read, according to Catholic News Agency. “In November 2018 Mr. Ciolek authorized the Diocese of Pittsburgh to respond to press inquiries about this matter.”

Wuerl resigned as archbishop of D.C. amid calls for his removal from prominent D.C. Catholics, sex abuse survivors, and survivor advocates. Pope Francis, however, praised him as a model bishop, said his actions concerning sexual abuse allegations were justified, and named him as the apostolic administrator of the archdiocese, serving essentially the same function as an archbishop but without the title, until his successor is appointed.