National Security Advisor John Bolton’s notepad at a White House press briefing Monday included a scribbled note about 5,000 troops in Colombia, igniting a firestorm of speculation as to its meaning. 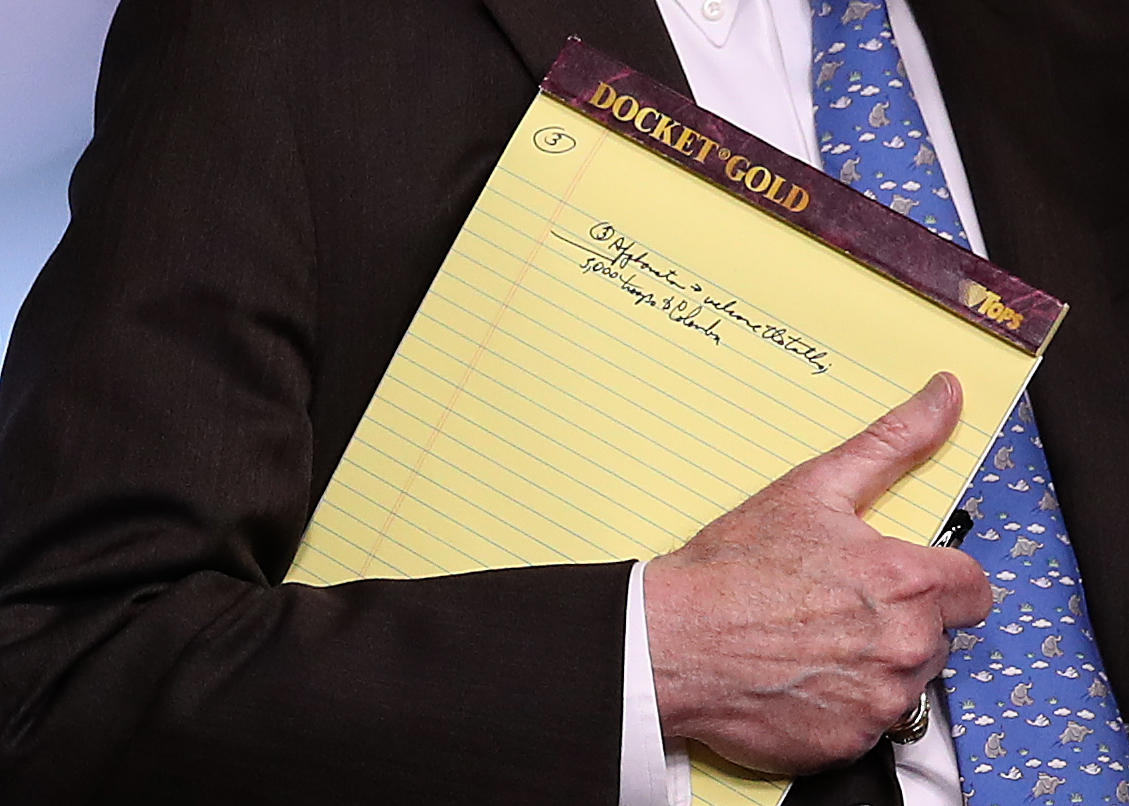 With handwritten notes on a legal pad, National Security Advisor John Bolton listens to questions from reporters during a press briefing at the White House January 28, 2019 in Washington, DC. During the briefing, economic sanctions against Venezuela’s state owned oil company were announced in an effort to force Venezuelan President Maduro to step down. (Photo by Win McNamee/Getty Images)

The note was quickly noticed by photographers with high-resolution lenses and distributed on social media. Bolton was in the briefing room alongside Treasury Secretary Steven Mnuchin to announce new sanctions on the Venezuelan oil industry, aimed at forcing out President Nicolás Maduro from power, though no mention of sending U.S. troops to Colombia was mentioned.

Colombia’s own foreign minister was confused by the note, telling reporters that he had no idea why it existed and he could not speculate as to the “importance and reason.”

So this notepad that National Security Advisor John Bolton was holding today at the White House briefing on Venezuela says:

If confirmed this would be a pretty terrible OPSEC breach.https://t.co/KS0Issfvps pic.twitter.com/IOrSprG567

The U.S. is now recognizing National Assembly President Juan Guaido as the legitimate ruler of Venezuela, and is aiming to bolster his ability to seize power. (RELATED: Trump Says Democrats Will Turn America Into Venezuela)

The White House would not explain Bolton’s scribbled note, only saying “as the president has said, all options are on the table.” Trump has spoken out forcefully in recent days against Maduro with the White House reiterating that it reserves the right to use force if the regime threatens U.S. citizens who remain in the country.

“I reiterate that the United States will hold Venezuelan security forces responsible for the safety of all U.S. diplomatic personnel, the National Assembly, and President Guaidó. Any violence against these groups would signify a grave assault on the rule of law and will be met with a significant response,” Bolton declared to reporters Friday.

After Trump recognized Guaido as the legitimate ruler of Venezuela, Maduro warned that U.S. diplomats had to leave the country. The U.S. stood its ground and noted that its essential personnel would remain within its embassy and warned the Venezuelan Security Forces not to take action against its citizens.