Democratic New York Rep. Alexandria Ocasio-Cortez expressed her gratitude on Sunday for a conversation she had earlier in the day with the leader of U.K.’s Labour Party Jeremy Corbyn.

“Great to speak to [Ocasio-Cortez] on the phone this evening and hear first hand how she’s challenging the status quo,” Corbyn tweeted. “Let’s build a movement across borders to take on the billionaires, polluters and migrant baiters, and support a happier, freer and cleaner planet.”

“It was an honor to share such a lovely and wide-reaching conversation with you, [Jeremy Corbyn]!” Ocasio-Cortez responded. “Also honored to share a great hope in the peace, prosperity, + justice that everyday people can create when we uplift one another across class, race, + identity both at home & abroad.”

It was an honor to share such a lovely and wide-reaching conversation with you, @jeremycorbyn!

Also honored to share a great hope in the peace, prosperity, + justice that everyday people can create when we uplift one another across class, race, + identity both at home & abroad. https://t.co/7qnz42I8du

He also praised Hamas fundraiser Raed Salah, calling him an “honored citizen,” according to Foreign Policy magazine. Salah is notable for espousing that Jews were responsible for the September 11 terrorist attacks. (RELATED: Ocasio-Cortez Claims Her Comments On Israel Were Doctored — They Were Not)

He further noted that the contributions of Abdul Aziz Umar and Husam Badran were “fascinating and electrifying” while hearing them speak at a conference in Qatar. Umar was convicted of killing seven people in Jerusalem for his role in a suicide bombing and Badran, a leader of Hamas’ military operation, was responsible planning multiple suicide bombings, including one that killed more than 100 people. 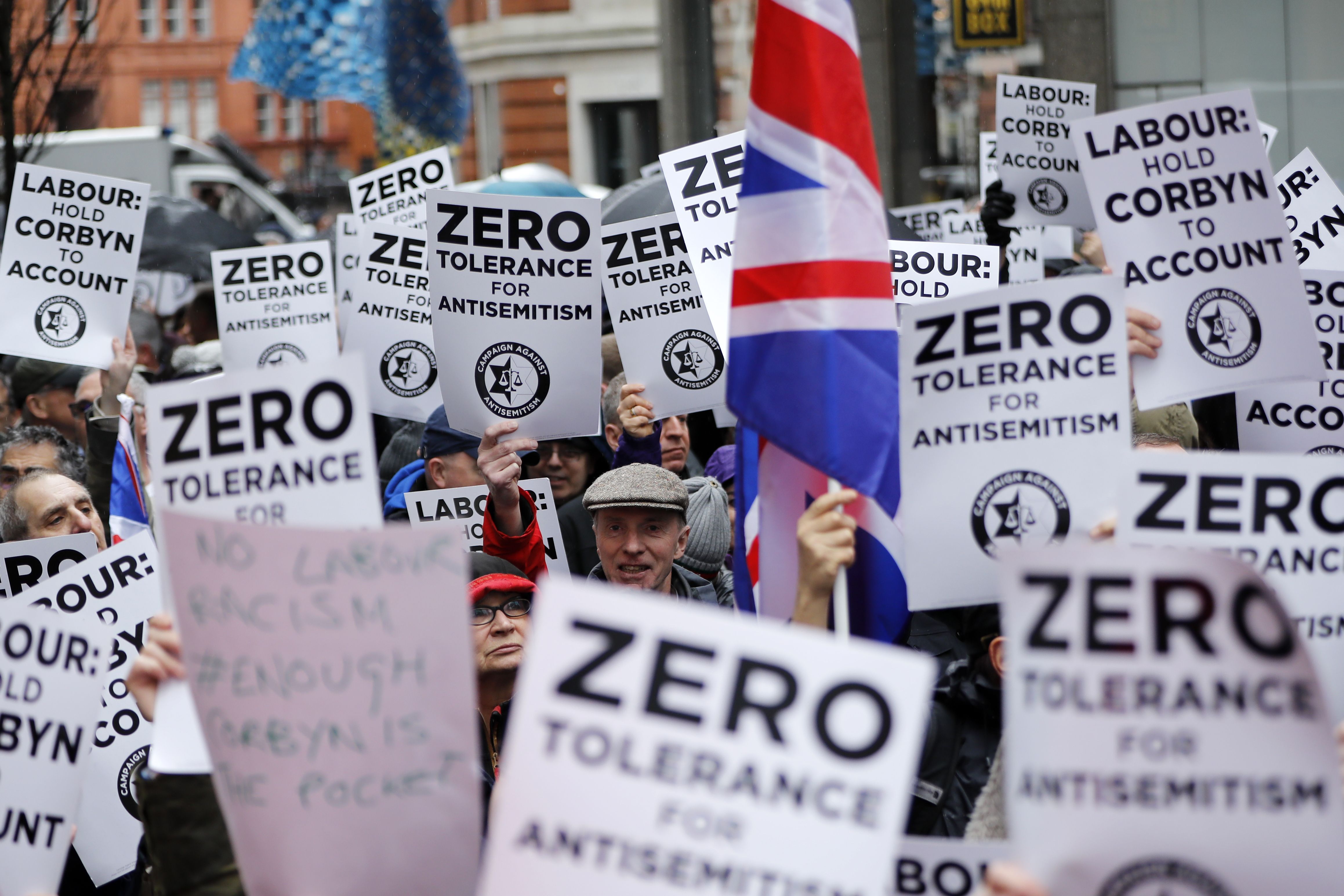 People hold up placards and Union flags as they gather for a demonstration organised by the Campaign Against Anti-Semitism outside the office of the Labour Party. Labour leader Jeremy Corbyn has been under increasing pressure to address multiple allegations of anti-Semitism within the party. (Tolda Akmen/AFP/Getty Images)

While Ocasio-Cortez claimed to have Sephardic Jewish ancestry during a Hanukkah event in December, she has made some eyebrow raising statements. The self-proclaimed Democratic socialist compared a migrant caravan trying to enter the United States illegally to Jews fleeing the Holocaust.

She also compared the effects of Democratic President Franklin D. Roosevelt’s New Deal to the Holocaust, urging the U.S. to follow Germany’s example by paying reparations and acknowledge the suffering that occurred during Nazi occupation in order to move forward.

Ocasio-Cortez is part of the Democratic Socialists of America that supports the anti-Israel Boycott, Divestment and Sanctions (BDS) movement, which seeks to punish the nation-state of Israel by economically depriving the country for its alleged mistreatment of Palestinians living in the Gaza Strip and West Bank.

The Daily Wire uncovered a 2017 video of the Democratic Socialists of America voting in favor of BDS while chanting “from the river to the sea, Palestine will be free,” a famous Hamas rallying cry.

Ocasio-Cortez has praised BDS and favors a two state solution, according to the Jerusalem Post.

The freshman congresswoman later implied in a tweet that she was not aware of Corbyn’s history of anti-Semitism and responded that “we cannot [and] will not move forward without deep fellowship and leadership with the Jewish community.”