Democratic Michigan Rep. Rashida Tlaib in 2006 wrote an op-ed column for Final Call, a Nation of Islam publication founded by Louis Farrakhan, in the latest tie to emerge between the congresswoman and anti-Semitic figures.

Tlaib authored the column in 2006, while working as the advocacy coordinator for the Arab Community Center for Economic and Social Services (ACCESS), two years before she first won election to the state legislature. Tlaib was described as a “guest columnist” in the article, which argued against deporting immigrants found guilty of “minor offenses.”

Final Call describes itself as “the official communications organ of the Nation of Islam” and was founded by the group’s leader, Farrakhan, according to Final Call’s website.

Farrakhan’s history of unapologetic anti-Semitism including describing Jews as “satanic” and praising Hitler as a “very great man,” was well established by 2006.

Final Call has published a steady stream of articles defending Farrakhan from charges of anti-Semitism.

An October 2018 Final Call article quoted Farrakhan’s social media director, Jesse Muhammad, saying the backlash was proof that Farrakhan “must have sprayed some form of termite repellant that stirred up those that have practiced and continue to practice Talmudic ways by eating at the foundation and the carcass of a dead people chosen by God.”

“The piece was from 2006 and was not an endorsement of Farrakhan or anyone for that matter,” a Tlaib spokesperson told Business Insider. “The Congresswoman has not had any direct contact with Farrakhan and condemns his anti-Semitic and anti-LGBTQ views,” the spokesperson said. Conservative writer Jeryl Bier on Monday first noted Tlaib’s Final Call op-ed. 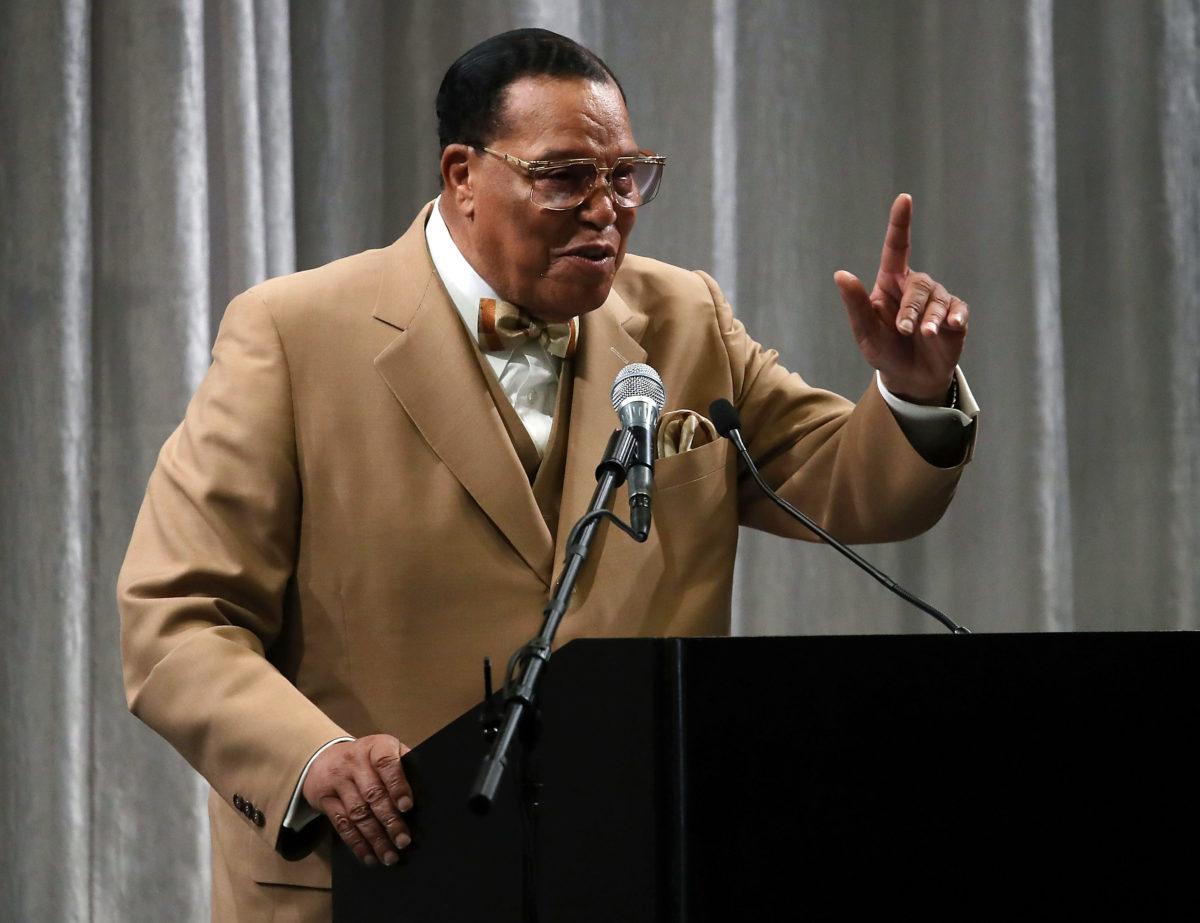 Nation of Islam Minister Louis Farrakhan delivers a speech and talks about U.S. President Donald Trump, at the Watergate Hotel, on November 16, 2017 in Washington, DC. (Photo by Mark Wilson/Getty Images)

Tlaib has already come under fire for her ties to other anti-Israel radicals, as well as her support for the anti-Israel Boycott Divest Sanction (BDS) movement, which has often overlapped with anti-Semitic causes.

A key fundraiser for Tlaib’s 2018 congressional campaign, Abdel-qader Maher, repeatedly promoted anti-Semitic conspiracy theories on Facebook, both on his own page and within a Facebook group that includes Tlaib.

Tlaib also came under fire after posing for a picture with Palestinian activist Abbas Hamideh, a supporter of Hezbollah who believes Israel shouldn’t exist, at her swearing-in ceremony.

Tlaib claimed she didn’t know him, though she had previously posted a picture with him on Facebook.  (RELATED: Maxine Waters Attended Nation of Islam Convention Where Farrakhan Defended Suicide Bombers)

Women’s March co-chair Linda Sarsour was an early supporter of Tlaib, who has continued to support Sarsour’s organization, despite its own anti-Semitism issues. Sarsour and another co-chair, Tamika Mallory, have faced scrutiny over their support of Farrakhan and the Nation of Islam. 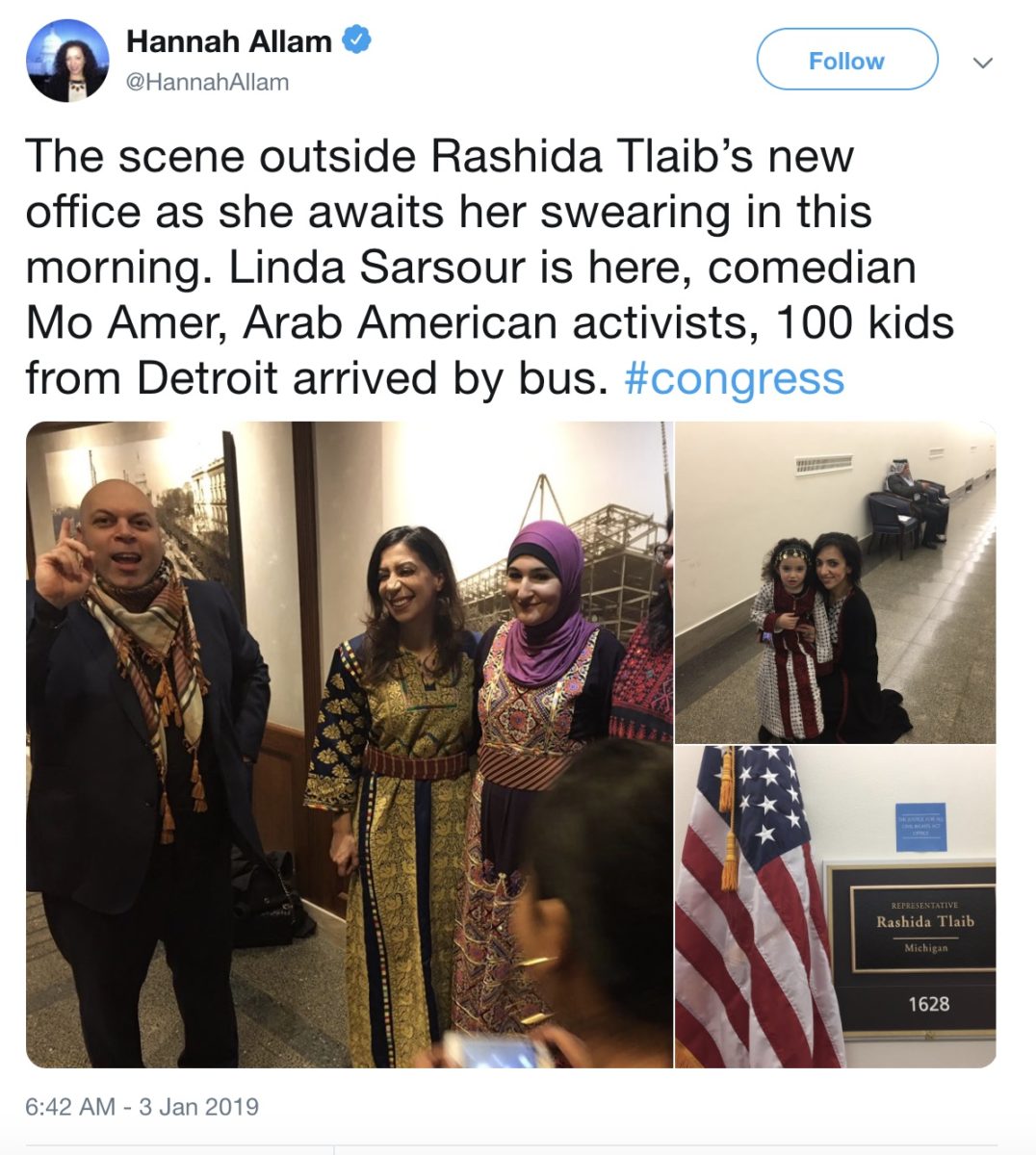 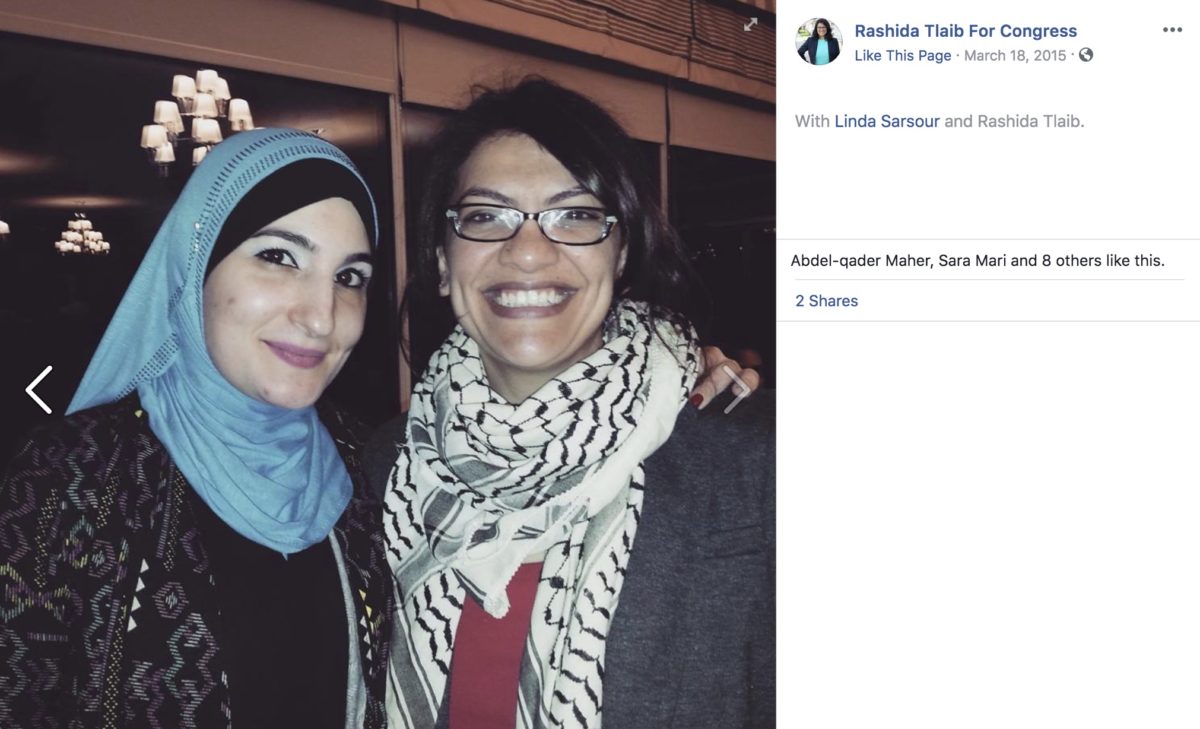 Sarsour was unapologetic about the Farrakhan controversy less than two weeks ago, in a taped podcast with left-wing media outlet Democracy Now.

Sarsour lashed out at critics of her support for Farrakhan, and called for “accountability” within “our communities” because “we made Tamika Mallory and Linda Sarsour and Minister Farrakhan literally the whole story instead of focusing on the real threats to our communities, which is white nationalism.”

Sarsour then suggested that Jewish people had mishandled the controversy, and urged them to have “hard conversations” in order to avoid “imposing [their] trauma” on others:

So, what I’m, we have been asked and demanded of many things. And we have came out and said we understand and we hear the pain. And I understand. I’ve been working with Jews for over 20 years. I understand historical trauma. And a lot of this comes from historical, the reasons why people backlash is because they respond from a place of trauma. Black people have historical trauma. Lots of people have historical trauma. But we have to sometimes go back to our communities and say, “Let’s heal. Let’s find ways to deal with this trauma so that we’re not imposing our trauma on others who are also traumatized, and focusing on the people that are causing the trauma to our communities.”