Fifty-caliber handguns are intriguing. They’re imposing, a bit intimidating — they kick like hell — and they sling large chunks of lead. But, even though all of the above sounds, well … interesting, what are they really good for?

If you’re mainly a paper puncher, there are more fun, less punishing and way more practical choices to be made. Now that we’ve established what they’re not good for, let’s get to the real purpose of the half-inchers. In my humble opinion, big and dangerous game hunting is where the .50-cals truly shine. Let that sink in for a moment.

I have found throughout my hunting adventures with a wheelgun that many greet my primary hunting weapon choice with skepticism, and sometimes outright hostility and righteous indignation. They typically cite a litany of reasons not to use a handgun — from range limitations all the way up to horsepower deficiencies — often spouting minimum muzzle energy requirements with an air of misplaced superiority.

Let me briefly address the most prevalent assertion by the doubters about muzzle energy: Just about every centerfire rifle cartridge shot out of a long-barreled firearm can boast better paper ballistics than a revolver. The velocities are higher, trajectories flatter and muzzle energies embarrassingly greater. It doesn’t require a doctorate in physics to see why, but big-bore revolvers don’t rely upon velocity and rapidly expanding bullets (to make up for a lack of diameter) to kill game. 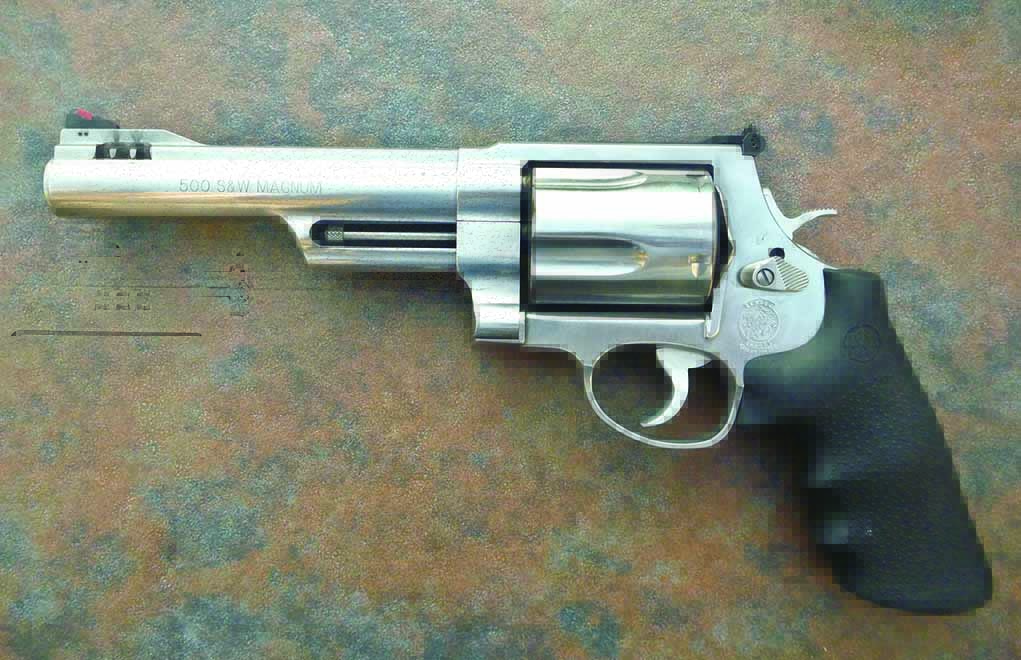 Smith & Wesson’s foray into the .50-caliber realm came with the introduction of their oversized X-frame, which was a necessity to encapsulate the big .500 Smith & Wesson Magnum, the king of the hill.

Big-bore revolver cartridges feature a large diameter and a relatively heavy bullet to get the deed done. Muzzle energy, in and of itself as a measure of lethality, is a poor indicator of effectiveness on terminal ballistics.

But are the .50s really better than their smaller brethren? I have written in these very pages that the .44 Magnum, when loaded properly, has and will take virtually any and every game animal it’s tasked with hunting and is the gold standard by which all big revolver cartridges are measured.

In fact, my exact words were this:

“So when do you actually need something bigger? The answer isn’t so cut and dried, but I’ll say it: never, actually. Before you proclaim me a blasphemer, let me qualify my statement with this declaration: The .44 Remington Magnum, properly loaded (this caveat applies to any and every cartridge), can, will and has unequivocally taken virtually every game animal that walks the face of this planet. Here’s where I weasel my way out. However, in my experience, there are better choices for really large game, and they begin at .45 and go up from there. There, I said it. In summary, will the .44 Mag work on really big game? Yes. Are there better choices? Yes again.”

I’ve used the .44 Magnum to great effect and have been witness to its effectiveness on large animals. The success of the .44 Mag. has been well documented since its inception, and with today’s much higher-quality bullets, the .44 Mag. has never looked better. 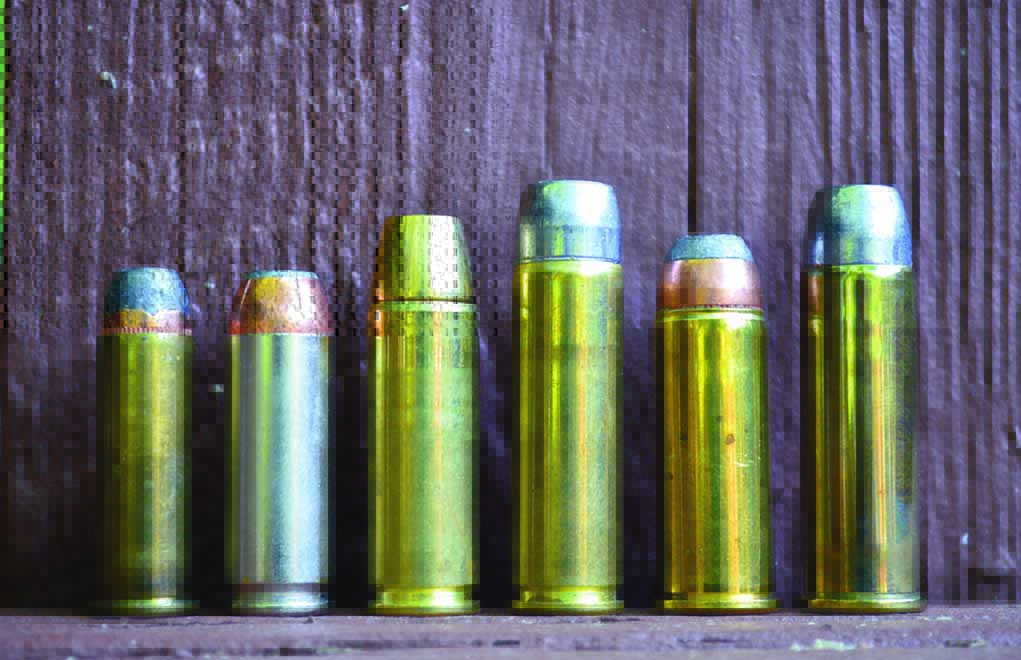 However, it absolutely does not impart the same damage or effect on big animals (let’s define that here as 1,000 pounds and up) as the big-50s. No way, no how. The .50-cals give the shooter an edge in margin of error, but this should not give one a false sense of security as you still — and maybe more importantly — need to do your part as far as shot placement is concerned. I mention it as being more important in that the .50-caliber handguns are typically much harder to master and more difficult to shoot accurately.

Let’s take a look at the current crop of available .50-caliber handgun rounds.

I’ve only included this one because it was pretty much the first commercial offering in a production handgun, starting with the Freedom Arms Model 83 and later Magnum Research, despite the fact that it was designed for use in a semi-auto pistol. It features a heavily rebated rim, and due to the physical limitations of the auto pistol platform, the round has a relatively short loaded length, necessitating the use of light bullets. This is the only one on the list I wouldn’t waste my time with.

This proprietary offering from Freedom Arms is the virtual ballistic twin to the .500 JRH, but instead of a traditional rim of a revolver cartridge, Freedom Arms opted to use a belt for head spacing. Commercial ammunition is available from the Grizzly Cartridge Company, and the end result is a packable .50-caliber revolver with power to spare.

The .500 JRH is the brainchild of renowned gunmaker, Jack Huntington. He set out to design a full-power, no compromise .50-caliber cartridge that would fit in the confines of a revolver, in particular the Freedom Arms Model 83, as a workable alternative to the .500 Linebaugh, which features too large a case and rim to fit the rather compact Model 83, with a maximum case length of 1.4 inches. He turned a dummy round in his lathe in 1993, and the .500 JRH became a commercially loaded reality in 2005, when Starline turned the brass and Buffalo Bore produced the first commercial loads for it. While brass is available from Buffalo Bore Ammunition (Starline actually produces the brass), .500 Smith & Wesson Magnum brass can easily be cut down for use. Magnum Research offers the .500 JRH as a regular catalog item.

The biggest of Smith & Wesson’s Magnum cartridges, the .500 S&W Magnum, was the company’s successful attempt at recapturing the crown of most powerful production revolver cartridge. Not only did Smith & Wesson seek to create the biggest cartridge in .50 caliber, it pulled out all stops by also making it amongst the highest of pressure producers. Smith & Wesson didn’t just want to take the top position back, they wanted to put as much distance as possible between the .500 Smith & Wesson Magnum and its nearest competitor.Unlike its parent cartridge, the .500 Maximum, the .500 S&W features a maximum pressure of nearly 62,000 psi, putting it in the company of a small number of revolver cartridges loaded to rifle-like pressures. Loaded to spec, it’s capable of impressive velocities — even with heavy bullets. With the introduction of Smith & Wesson’s .500 came a renewed interest in handgun hunting.

But, this is definitely not a cartridge for the uninitiated. Even when loaded in a heavy revolver like the X-frame, or even BFR’s iteration, the .500 S&W produces significant recoil. You cannot launch bullets this heavy, at these speeds and burning this much powder, without producing sizeable recoil. This round evokes the term “extreme.”

Attention was first drawn to the .500 Linebaugh in the August 1986, through an article appropriately titled, “The .500 Magnum: The Outer Limits of Handgun Power.” Though not offered in a production revolver until recently (Magnum Research just introduced this caliber in their already impressive lineup of revolvers), the .500 Linebaugh still boasts a strong following.

Loaded to its full potential, the .500 Linebaugh is a true big-game hammer. Based originally on the .348 Winchester case and cut down to a nominal 1.4 inches, the .500 Linebaugh features a .510-inch bore diameter. Maximum pressures should be kept in the 33,000 to 36,000 psi range, though it will go safely higher. The beauty of the .500 Linebaugh is that it doesn’t need to be pushed hard to work well on large game (with the caveat, of course, that it’s loaded correctly and with a good bullet).

Also referred to as the “.500 Linebaugh Long,” this wildcat is typically built on Ruger .357 Maximum frames housing custom five-shot cylinders. Recoil at the upper end of the loading spectrum can best be described as “very unpleasant” to “life altering,” particularly when loaded to the 50,000 psi range. The .500 Maximum is capable of throwing 525-grain bullets at a blistering 1,500 fps, and some reports indicate even more velocity is possible. While it’s not recommended to feed your Maximum a steady diet of similar loads, it is fully capable of delivering this level of performance.

This cartridge is an exercise in excess. Dedicated and properly head-stamped brass is available occasionally on the used brass market (Hornady actually made a run of this brass), but the perfect parent case is the commercially available .50 Alaskan, which can be easily cut down to 1.6 inches.

In the end, the .500 Maximum is the poster child for “More’s Law” being applied to the already potent .500 Linebaugh. Is the added velocity potential and resultant abuse on the shooter necessary? No, but we don’t always (or even usually) apply the concept of necessity to our hobby. What fun would that be? However, I will state with certainty that the .500 Maximum, loaded correctly, is a fight stopper.

Recoil is severe in many cases, but most rifle hunters, even vastly experienced big-bore rifle hunters, will tell you the .458 Lott isn’t so fun to shoot, either. The big .50s require a true dedication to the craft to master, a perishable skill that needs constant upkeep. However, once mastered and loaded properly for the game being pursued, their terminal effectiveness is admirable. I have cleanly taken a number of large bovines with revolvers, including water buffalo and Cape buffalo, and the big .50s deliver as long as the shooter does his/her part.

Some may think it unfair to characterize the big .50s as being brutal with top-end loads, but I feel that sugar-coating the recoil reality is doing a disservice to those who may want to foray into the realm of the .50-caliber handgun. After all, they do kill on both ends. Of course, like all calibers, they can be loaded down to “comfortable” levels, but to fully exploit the attributes offered by the half-inchers, I personally don’t run them too moderately.

Once you choose you .50 and work up a good, effective load, you’ll see that it offers serious medicine for big and dangerous game. The .500s are the no-compromise calibers of the revolver world, and by default, they make a big hole.

Check this out: Gun Digest offers a ton free downloads from AR-15’s and concealed Carry to Reloading and Gun Values. Click here to see what they offer.