Holding the fourth open election in 100 years, Chicago has cleared the path to elect its first black female mayor, advancing Toni Preckwinkle and Lori Lightfoot in Tuesday’s mayoral race to the April 2 runoff.

Fourteen candidates vied for top spot to replace incumbent Democratic Mayor Rahm Emanuel in the nation’s third largest city. It was the largest candidate field in its history, and campaigns collectively raked in more than $30 million, according to Ballotpedia. More than half a million voters went to the polls Tuesday in a lower-than-expected voter turnout. (RELATED: Embattled Rahm Emanuel Not Running For Election In Chicago) 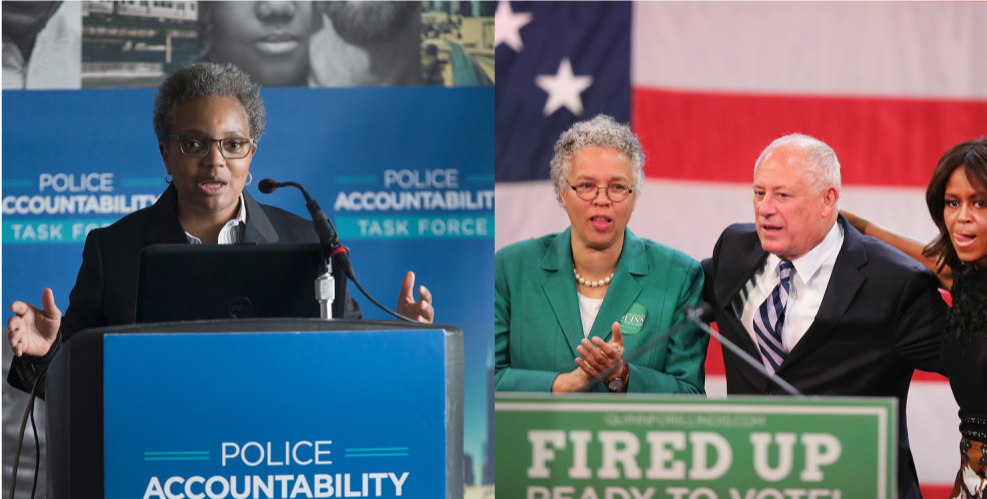 Left: Lori Lightfoot, chair of the Chicago Police Board, addresses community leaders and members of the news media about the findings of the Police Accountability Task Force on April 13, 2016 in Chicago, Illinois. Right: First lady Michelle Obama (R) and Cook County Board President Toni Preckwinkle (L) campaign for Illinois Gov. Pat Quinn (C) during an event at the University of Illinois Chicago on Oct. 7, 2014. (Photos by Scott Olson/Getty Images)

Leading the field with 17 percent of the vote, Democrat Lightfoot, 56, is a former U.S. assistant attorney and Chicago Police Board president who has never held elected office. Preckwinkle, 71, the president of the Cook County Board of Commissioners and the chair of the Cook County Democratic Party, received 16 percent.

Although he led fundraising with over $8 million and hailed from a family who has dominated Chicago politics for the past six decades, former U.S. Commerce Secretary and Obama Chief of Staff Bill Daley failed to secure a runoff spot after a third place showing. Several candidates voiced hope that “Daley fatigue” would work in their electoral favor.