Freshman Congresswoman Alexandria Ocasio-Cortez seemed to declare the entire war on terror to have been “disastrous + wrong” in a series of tweets Monday night. She was not only speaking about the Iraq War, but the war in Afghanistan against Osama bin Laden and al-Qaida, the group behind the 9/11 terrorist attacks, as well as their enablers and protectors, the Taliban government.

Originally tweeting a response to Democratic Congressman Juan Vargas, who was critical of Democratic Rep. Ilhan Omar’s most recent comments that some describe as anti-Semitic, the Democratic Socialist turned to whether it was “unacceptable” to question U.S. foreign policy.

“I’m curious if Rep. Vargas will further explain his stance here that it’s unacceptable to even *question* US foreign policy,” Ocasio-Cortez wrote. “Plenty of Dem members have asserted that discussion + debate on this issue is fair and merited. Is this stance a departure from that?” 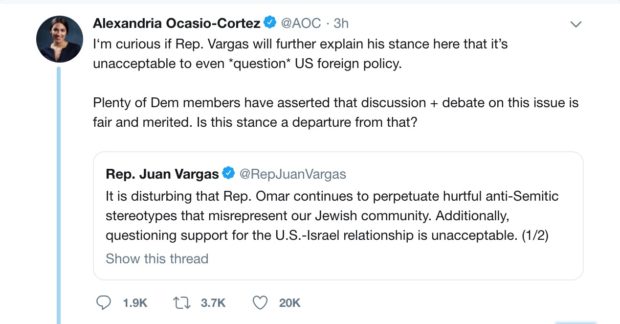 “I remember a time when it was ‘unacceptable’ to question the Iraq War. All of Congress was wrong, including both GOP & Dem Party, and led my generation into a disastrous + wrong war that virtually all would come to regret,” she continued.

She then corrected herself, saying she’d meant to say the war in Afghanistan.

Then she came out against the the Authorization for Use of Military Force (AUMF), which authorized the United States government to use military force against those people and groups responsible for the September 11, 2001, attacks that killed more than 3,000 Americans.

“But honestly we shouldn’t have been in either, and we should end the AUMF now while we’re at it,” she tweeted.