Celebrity attorney and CNN analyst Mark Geragos is the co-conspirator cited in a federal indictment handed down Monday against attorney Michael Avenatti, according to The Wall Street Journal.

Authorities indicted and arrested Avenatti Monday in New York on charges of wire fraud, bank fraud and attempting to extort $20 million from Nike Inc. Avenatti threatened to publicly disparage Nike if the company did not pay him millions of dollars, according to the indictment.

The indictment was announced less than an hour after Avenatti announced he was holding a press conference on Tuesday about Nike.

According to WSJ, Avenatti’s co-conspirator was Geragos, a lawyer famous for representing clients like Michael Jackson, Jussie Smollett and Colin Kaepernick.

Avenatti and the alleged co-conspirator met with lawyers from Nike’s lawyers at the firm Boies Schiller on March 19, according to the indictment. The duo said they would release information damaging to Nike unless the company paid them more than $20 million on top of $1.5 million to a client who Avenatti was representing. (RELATED: Don Jr. Gets Last Laugh On Avenatti Indictment: ‘#BASTA’)

Boies Schiller lawyers agreed to record a follow-up conversation with Avenatti on behalf of federal prosecutors, according to one of WSJ’s sources.

In the March 20 phone call, Avenatti again requested the $1.5 million for his client and also sought a lucrative retainer to conduct an internal investigation of Nike.

Avenatti then allegedly threatened that if Nike failed to meet his demands, “I’ll go take 10 billion dollars off your client’s market cap.”

“I’m not fucking around,” Avenatti said in the phone call, according to WSJ.

CNN did not return a request for comment about Geragos, who is still listed on CNN’s site as a legal analyst. 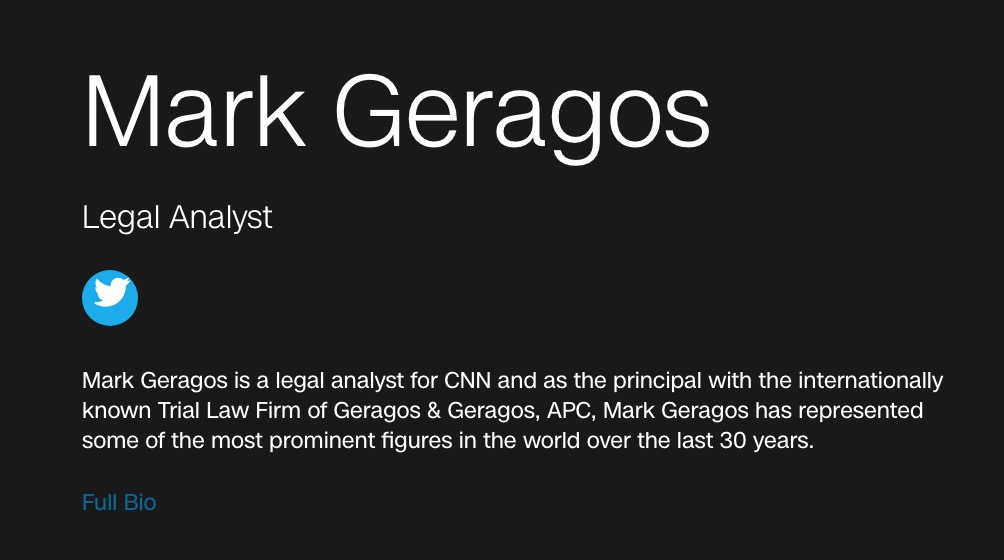 Daniels issued a statement after Avenatti’s arrest saying that she was “saddened but not shocked” by the news. She suggested that she will release damning information about Avenatti in the near future.

Avenatti was also indicted Monday in California on embezzlement and bank fraud charges related to a coffee business he operated.