At times I feel sorry for ammunition companies, particularly the R&D teams tasked with developing new loads and cartridges. They work overtime in lonely labs and dark test tunnels to deliver what they think hunters and shooters will want and like, only to realize we can be as fickle as fashionistas when deciding what’s hot.

Take the .17 Winchester Super Mag. for example. Introduced by Winchester Ammunition in 2013, the cartridge had all the markings of a slam-dunk success. It was the fastest rimfire round ever produced commercially; Winchester proudly announced it would send a 20-grain bullet at 3000 fps. (In comparison, many .22 WMR loads don’t even break 2000 fps, and the .17 HMR tops out at less than 2700.) Varmint shooters and small-game hunters already knew tiny .17-caliber bullets were explosively effective on rodents of all sorts. Compared to centerfire loads, .17 Winchester Super Mag. ammo was inexpensive at about $15 for 50 rounds, and you could shoot a whole box without even thinking about recoil. Here was a high-performance option for high-volume shooting, at a low price to boot, and yet it seemed like hunters hardly took notice.

Perhaps what they need to appreciate the .17 Winchester Super Mag. is a rifle that’s as souped-up as the cartridge. Enter the Franklin Armory F17-L, built on the AR platform and designed specifically for Winchester’s .17-caliber rimfire speedster.

To produce high velocities, the .17 Winchester Super Mag. operates at a maximum average pressure of 33,000 pounds per square inch—substantially higher than the .22 LR, .22 WMR and .17 HMR cartridges. A blowback action, as found in most semi-automatic rimfires, is not sufficient for the .17 Winchester Super Mag.’s operating pressure. To safely harness the higher pressure for reliable cycling, the semi-automatic F17-L uses a gas-piston operating system paired with a rotating, locking bolt—similar to what you’d find in a piston-driven centerfire AR.

The seven-lug bolt, which is contained within a steel carrier, feeds a cartridge to the chamber from the detachable box magazine and locks up with the barrel extension. When the rifle is fired, propellant gas bled from the barrel enters the gas block and sends the gas piston rearward. The piston drives the operating rod into the bolt carrier, which travels to the rear to unlock the rotating bolt, and extract and eject the case. The bolt carrier’s rearward movement is stopped by the buffer assembly, and the buffer spring sends the carrier group forward to chamber another round. 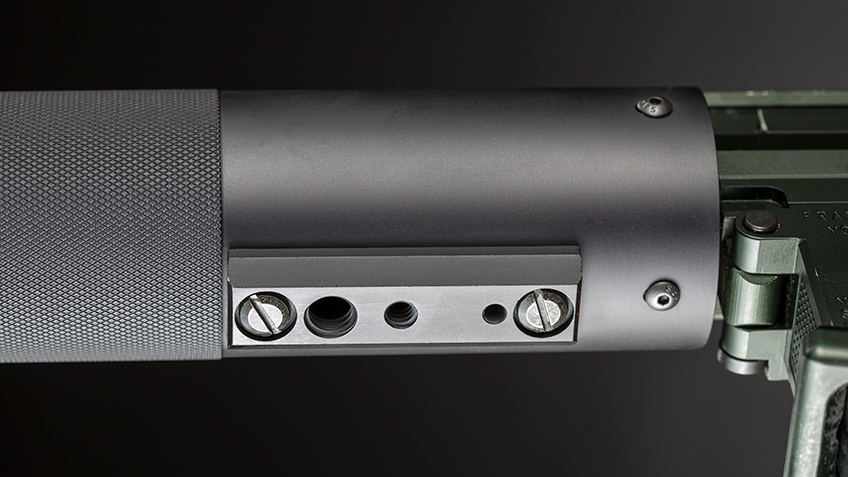 The system operates like a piston-driven centerfire AR, but its proprietary components are sized, and its cycle is timed, to function with the .17 Winchester Super Mag. Besides reliably cycling the high-pressure rimfire round, the rifle’s gas-piston system is also cleaner than a blowback action.

A few words about the F17-L’s magazine are in order. It’s built like a tank. All components are metal. The rifle I tested came with a 20-round magazine, but 10-rounders are also available. Both hold .17 Winchester Super Mag. cartridges in a single, slightly offset, stack. To make loading the magazine easier, insert the end of an empty-chamber indicator into the hole in the bottom of the follower to relieve spring tension.

The F17-L’s other components follow typical AR design. Its upper and lower receivers are machined from aluminum billet and hard-coat anodized. The safety switch and magazine-release button are located in the usual places. There’s a forward assist, but it should be used sparingly with the rimfire round in accordance with Franklin Armory’s recommendations. The F17-L has a bolt-carrier lock, but it’s cosmetic and does not lock the carrier to the rear. The carrier does not lock open on an empty magazine, either. 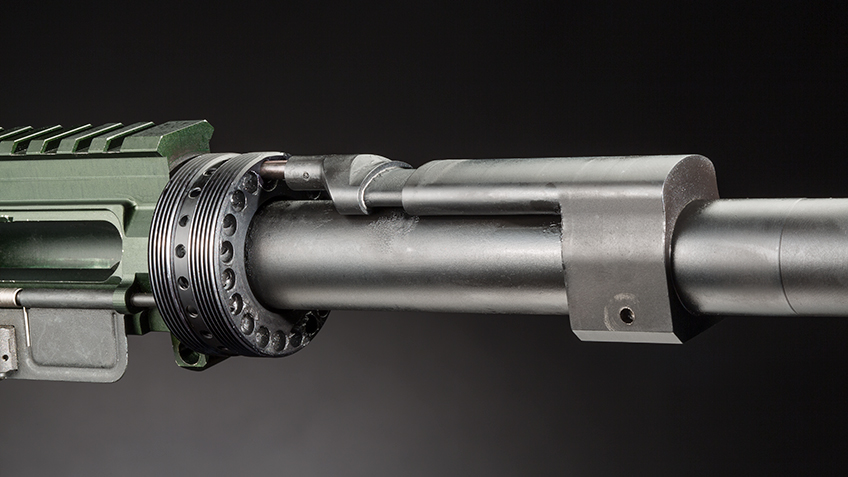 Other features include an overmolded rubber Ergo SureGrip, fixed Magpul MOE buttstock and Franklin Armory’s free-floating, aluminum TML handguard. The handguard includes slots that are compatible with the Magpul M-Lok accessory mounting system, as well as a dedicated rail for bipod or tripod attachment.

The F17-L is heavy for a rimfire (and an AR) weighing in at almost 10 pounds. Much of that weight comes from its full-contour, 20-inch barrel. Franklin Armory offers other versions of the F17 with different barrels and furniture that are lighter. That heavy barrel, though, aids accuracy. Five-shot groups at 100 yards with the F17-L averaged 1.16 inches; the rifle had a definite preference for Winchester’s 15-grain Varmint X Lead Free load. The F17-L functioned smoothly, with just one failure to feed in 150 rounds.

The F17-L has an MSRP of almost $2,100. That’s on the high end for a rimfire AR, but the F17-L offers performance that is just as high. It’s the perfect mate for the .17 Winchester Super Mag., and varmint hunters should take notice.