Sri Lanka blocked Facebook, Instagram and other forms of social media Sunday as the country investigates explosions that killed more than 200 people and injured another 400.

The decision to block social media was taken in reaction to false news reports spreading on social media following the bombings, the president’s secretary, Udaya Seneviratne, said in a press statement. The block will continue until officials conclude their investigation into the matter, media reports note.

Sri Lanka has struggle to stamp down sectarian violence. The government temporarily shut down Facebook and WhatsApp in 2018 to curb potential anti-Muslim violence. Prime Minister Ranil Wickremesinghe warned the public not to believe false information circulating about the bombings Sunday.

A Facebook representative confirmed the government had shut down the platform in the wake of the attacks. Much of the information about the attacks coming out of Sri Lanka are a result of people sharing photos on Facebook and other social media sites. (RELATED: ‘A River Of Blood’: Coordinated Church Bombings Leave More Than 200 Dead In Sri Lanka)

An explosion tore through St. Sebastian’s Church in the city of Negombo during an Easter service, with deadly blasts following in St. Anthony’s Shrine in the city of Colombo and Zion Church in Batticaloa. Members of St. Sebastian posted Facebook photos showing a sanctuary strewn with rubble, blood and the wounded. Bombs also detonated in the hotels Shangri-La, the Kingsbury and the Cinnamon Grand. 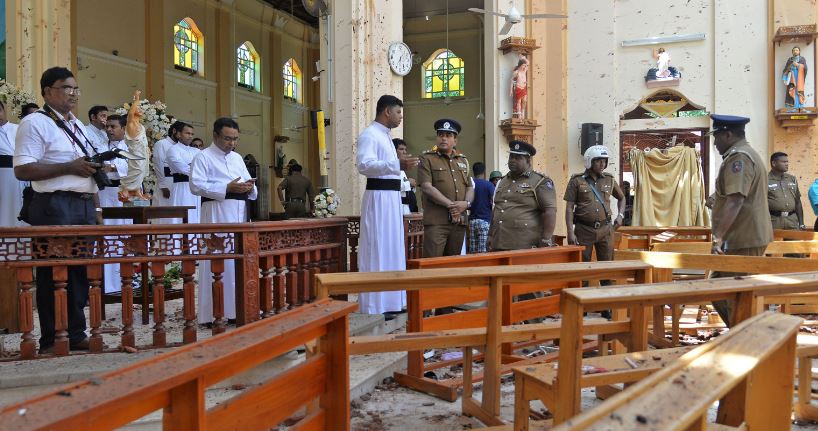 Police officials and catholic priests stand inside the church after a bomb blast in Negombo, Sri Lanka, April 21, 2019. REUTERS/Stringer

Facebook and Twitter were criticized in March for not acting fast enough to nix live videos of a shooter who killed roughly 50 people in a shooting spree in New Zealand. Critics claim the social media giants’ failure to police their airwaves immediately demonstrates their inability to look out for their users.

The New Zealand shooter’s video was viewed a total of 4,000 times before being removed from Facebook, according to the company. The social media site also removed about 1.5 million videos of the attack globally. More than 1 million of those videos were blocked at upload and were subsequently prevented from being seen.