Stag Arms of New Britain, Conn., opened shop as a maker of AR-15-type rifles back in 2003—specializing particularly in left-side-ejecting models in order to better accommodate the left-handed segment of the gun community—but it wasn’t until 2017 that the company took its first crack at the larger AR-10-style platform. Today, the Model 10 line stands at more than a dozen variations, offered in both left- and right-hand configurations, firing either the 6.5 mm Creedmoor or the .308 Win. cartridge. The subject of this review is a .308 Win.-chambered Stag 10SL, a southpaw variant with a short 16″ barrel.

The Model 10SL’s receivers are forged from hard-coat anodized 7075-T6 aluminum. Something of a hybrid design, the company opted to use ArmaLite-style receivers, wherein the lower rear corner of the upper is angled rather than rounded, in its Model 10 line, yet the guns are otherwise compatible with DPMS-pattern parts—with the exception of the takedown pin, pivot pin and takedown pin detent—which are proprietary Stag designs. In an effort to minimize play between the two receivers, the 10SL’s lower makes use of an adjustable, nylon-tipped tension screw that applies upward pressure on the upper’s rear takedown pin lug when the receivers are mated together. Access to the screw does, however, require that the pistol grip be removed. 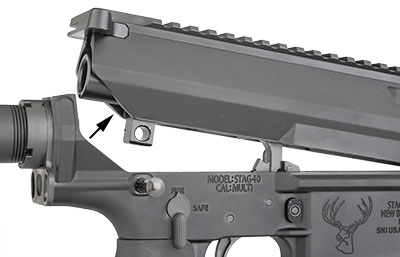 Something of a hybrid design, the Model 10SL uses ArmaLite-style receivers, wherein the rear corner of the upper is angled rather than rounded (arrow), yet the gun is otherwise compatible with DPMS-pattern parts.

Production of a left-hand AR requires Stag to forge an upper receiver that is a near mirror image of the conventional right-hand version—a slightly re-designed ejection port cover being the lone difference. Moving the forward assist and brass deflector to the left side of the receiver allows for comfortable slinged carry of the rifle by southpaw users—something that cannot be said for standard right-hand models. In addition to altering the receiver, the bolt and its carrier have been reversed on the 10SL in order to facilitate left-handed use.

Meanwhile, the only alteration to the lower that needed to be made was the replacement of the standard left-side/right-hand 90-degree safety selector with a right-side/left-hand version. The push-button magazine release and bolt release lever remain in their typical locations, above the trigger guard on the right and left sides of the receiver, respectively.

In addition to re-designing the upper receiver, Stag had to manufacture a left-handed bolt carrier and a left-ejecting bolt in order to construct a southpaw-friendly rifle.

The gun’s chrome-lined, button-rifled, government-profile barrel is made from 4150 steel and uses 1:10″ right-hand twist rifling. Threaded 5/8×24 TPI at the muzzle, the 10SL ships with VG6 Precision’s Gamma 762 muzzle brake affixed to the barrel. A direct-impingement AR, the Stag makes use of a mid-length gas system via a low-profile gas block affixed to the barrel 10″ from the chamber. The rifle ships from the factory with Stag’s own 13.5″ free-floating handguard installed; the 6061-T6 aluminum fore-end features Picatinny rail along its entire 12-o’clock surface (to supplement 7″ of rail atop the rifle’s receiver), six M-Lok-compatible slots on each of its 3-, 6- and 9-o’clock faces, and three flush-cup sockets.

A black QPQ nitride finish has been applied to the bolt carrier group for extended service life and increased lubricity. For furniture, the Model 10SL wears a six-position-adjustable Magpul ACS buttstock, with a locking lever and internal storage compartments, and an overmolded rubber Hogue pistol grip. The rifle uses a standard AR-10 carbine-length buffer and recoil spring, and a charging handle with a basic left-side-only latch. State-compliant versions (Calif., N.J., N.Y.) of Stag’s Model 10 line are also available. As the gun came from Stag, with no iron sights and one 10-round Magpul PMAG, our test 10SL weighed in at 8 lbs., 3 ozs., which is pretty typical of a 16″-barreled AR-10-platform rifle.

For furniture, the Stag wears a six- position-adjustable Magpul ACS buttstock, with a locking lever and internal storage compartments, and an overmolded rubber Hogue pistol grip.

Straight from the box, the rifle was too dry to function reliably, as during our initial trip to the range fired cases would occasionally fail to eject. However, the liberal application of lubricant cleared this up, and during subsequent range visits the Stag soldiered through several hundred rounds of additional function testing without further issue.

Accuracy testing was conducted using this magazine’s five-shot, five-group protocol, and as can be seen in the nearby tabulated results, the 10SL is capable of fine accuracy. Of the three ammunition loads used in this evaluation, each managed at least one sub-m.o.a. group at 100 yds., but SIG’s 150-gr. copper solid was the clear winner—producing both the tightest single group (0.76″) and the smallest five-group average (1.16″). 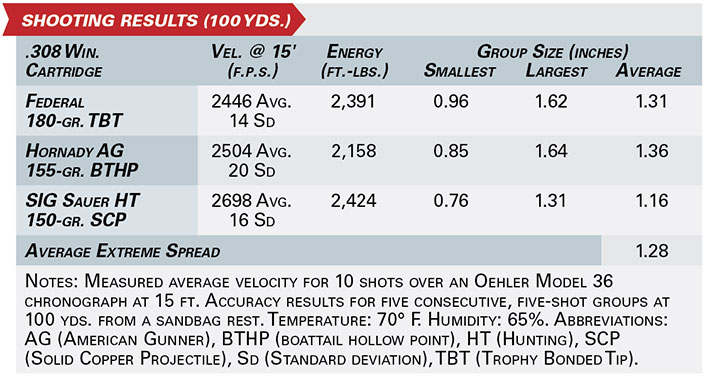 Stag specs its non-adjustable, single-stage trigger with a pull range of between 5 and 8 lbs., and our test sample released consistently around 6 lbs., 10 ozs., of pull after 1/8″ of take-up and a moderately crisp break. All in all, we found the trigger to be serviceable but unremarkable, and we believe the installation of a more refined trigger could improve accuracy considerably.

In its stock configuration, the AR platform is not a particularly southpaw-friendly affair, and Stag’s L line of left-handed models alleviate many of the issues that lefties face in running the rifles. Given the fact that they are priced competitively relative to many of the market’s comparable right-hand options, there’s really no reason for left-handed shooters to make do with a rifle not made for them. Previous evaluations of the company’s AR-15-sized offerings revealed them to be capable performers, and our time behind the larger, more powerful Stag Model 10SL revealed it to be of equal quality.