A 69-year-old disabled woman working at the United States Geological Survey (USGS) repeatedly reported harassment from her coworkers to her superiors, linked to her support for President Donald Trump. Instead of investigating her concerns, someone at the agency reported her for a violation of the Hatch Act.

Wanda Wooten, who has worked in the federal government for more than a decade, is currently a statistical assistant at the National Minerals Information Center. In late February 2019, she hung a picture of the president and two of first lady Melania Trump. The next morning, she found a note signed by Mike Magyar, listed on the USGS website as acting director of the NMIC.

“Wanda, The Hatch Act specifically prohibits any political campaigning, etc on Federal sites,” the note reads. “As President Trump has an active re-election campaign ongoing, these images violate the Hatch Act so I removed them. Mike Magyar.”

Wooten confronted Magyar about the note, and pointed him to a determination by the Obama administration that pictures of presidents taken in an official capacity did not violate the Hatch Act. According to Wooten, Magyar told her she was creating a “hostile work environment.” (RELATED: 18 Years Of Energy Data Manipulation ‘Entirely Unacceptable,’ No Proof Doctoring Has Ended)

Two months later, Wooten received an email from Kelley Resendes, an attorney with the U.S. Office of Special Counsel (OSC), informing her that the office had “concluded its investigation into an allegation that you violated the Hatch Act.” 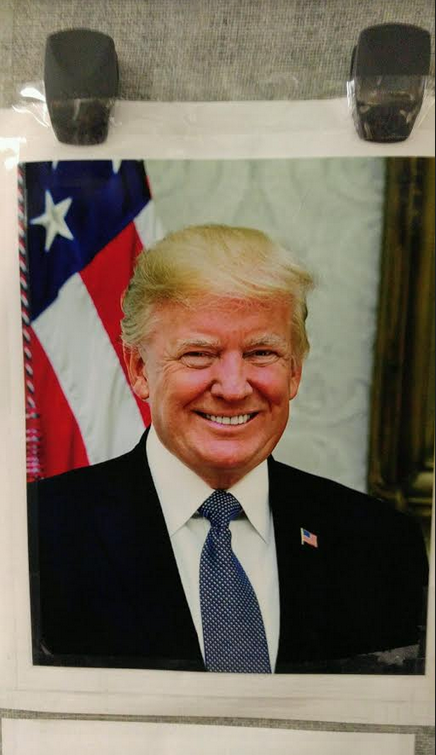 A photo of the Trump portrait in Wooten’s office

“Although OSC has concluded that you violated the Hatch Act … we have decided not to pursue disciplinary action and instead are issuing you this warning letter,” the letter from Ana Galindo-Marrone, the chief of the OSC’s Hatch Act unit reads. The letter from the OSC acknowledges that all the photos she displayed of Trump were official photos, along with several of the first lady.

The letter also acknowledges that official photographs are an exception to the Hatch Act rule regarding election-related materials:

Because you displayed multiple photographs of the First Lady and President Trump, two of which were altered by the addition of ‘I Voted’ stickers, OSC notified you on March 7, 2019 that you were in violation of the Hatch Act. OSC then advised that you could come into compliance with the law by removing all images except for one official photograph of President Trump, provided the ‘I Voted’ sticker was removed. OSC confirmed on March 8, 2019, that you removed the stickers and photographs at issue.

The speed with which the Hatch Act investigation was conducted is in marked contrast to the inaction of her superiors when she reported a pattern of harassment going back more than a year before the supposed Hatch Act violation.

According to Wooten, the harassment began in October 2017, when someone opened a drink she had left in the refrigerator and spilled on the floor. She said she found a note in her lunchbox at the time, saying “eat shit and die,” which she threw away. Wooten informed her immediate supervisor Shonta Osborne on October 24.

Five months later, the same thing happened again. In March 2018, a note was placed in her lunchbox that read, “You fucking idiot,” a copy of which was provided to The Daily Caller. Along with the note, her container of fruit was opened.

Wooten left her cubicle light on regularly because her disability made it hard to turn on and off. She would regularly come in to the office to find it turned off. After leaving a note in April telling her colleagues to leave the light on, she received another note April 18 saying, “Your damn light? You mean this U.S. government light, powered by electricity, both paid by taxpayers? Turn it off when not in use, and do not swear at me, thank you. Very sincerely, A. Taxpayer.”

In an email dated October 22, 2018, sent to Deputy Secretary David Bernhardt, Wooten writes, “I have gone many times to my supervisor, to her supervisor, and to EEOC [Equal Employment Opportunity Commission] and nothing — absolutely nothing has been done on my behalf concerning the harassment I am forced to endure from my fellow employees … I have had messages posted in my cubicle, on my lunch (I don’t put my lunch in our refrigerator now because I don’t know if someone has spit in it) my personal belongings stolen.”

In a statement shared with the Caller, Wooten writes that she believes her supervisors “have helped to incite some of this anger towards me by not taking steps as unbiased supervisors to stop it. I believe this anger towards me is escalating … This issue has not been dealt with properly or in a timely manner. It has left me in a vulnerable position and I am in fear of my mental wellbeing and my physical safety from unknown assailants.” (RELATED: U.S. Geological Survey PSA: Please, Don’t Roast Marshmallows Over Lava)

In January 2019, Wooten hung a fact sheet from the Heritage Foundation about birthright citizenship in her cubicle. Shortly thereafter she added a photograph of Trump. Wooten claims these were removed several times. After posting a note February 18 that said, “To the coward that keeps taking this down — come face me … I know who you are,” the next day there was a note that said, “Then come say ‘hello,’ crazy person!”

After Wooten complied with the OSC’s ruling, the one photograph that remained of Trump went missing one morning. She reported this to Mike Magyar, who, according to Wooten, told her, “you have two more” photos, implying that she should use those. 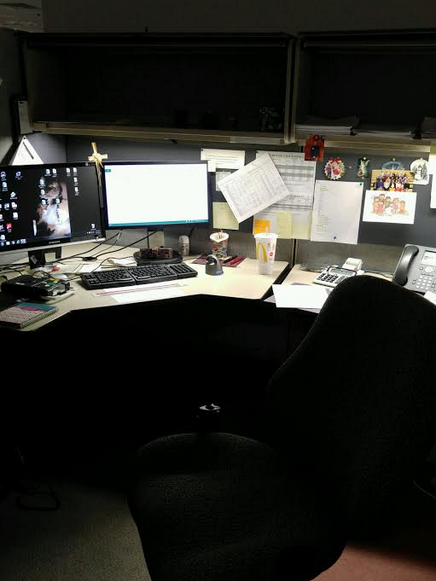 After replacing the picture of Trump that had been stolen, Wooten also posted smiley faces representing her grandchildren, along with initials for each of them. On April 22, Wooten found both typewritten and handwritten notes calling into question her intelligence and accusing her of building “little shrines to Trump.”

“When people who worship Trump build little shrines to Trump in federal workplace public space against the spirit of the law; and curse and swear like the good Christian Trump is, then we can know that they, like Trump, admire ignorance,” a portion of the typed note reads.

“Never learned the difference between ‘to’ and ‘too’? That’s OK, most Trumpsters don’t know!” read the handwritten note, in reference to one of the captions beneath the smiley faces representing her grandchildren.

Her reporting of harassment was finally acknowledged April 10, 2019, and on April 24 Wooten received a letter that her allegations were being investigated by an independent investigator for the United States Postal Service named Richard Norcross.

“The decision has been made to obtain the services of an outside contractor to conduct a neutral and thorough administrative investigation into the alleged misconduct,” reads the letter from the office of the USGS regional director’s office.

Richard Norcross, an investigator with the USPS, declined to comment for this story citing an ongoing investigation, though the Caller understands that he has not yet visited the USGS headquarters. Mike Magyar did not respond to a request for comment.