“Here are my principal conclusions,” Amash, who has frequently criticized the president and hasn’t ruled out challenging him for his party’s nomination, wrote on Saturday via Twitter in what was the beginning of a lengthy thread laying out his reasoning.

“Contrary to Barr’s portrayal, Mueller’s report reveals that President Trump engaged in specific actions and a pattern of behavior that meet the threshold for impeachment,” Amash concluded later in the thread. (RELATED: Justin Amash Takes It On The Chin From Conservatives After Impeachment Stand)

However, Paul told The Huffington Post on Wednesday that the Mueller report itself is actually the “antithesis of libertarianism.” 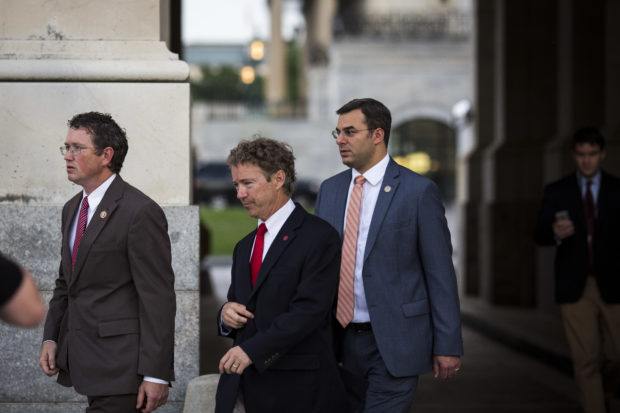 “I actually think the libertarian position on the investigation is ― you know, libertarians, we’ve been very, very critical of the intelligence community having too much power, including Congressman Amash has said, you know, really you should have to get a warrant before you get an American’s records,” Paul said during a short interview with HuffPost.

The Kentucky senator called Mueller’s investigation “an abuse of intelligence power consistent with what libertarians have been complaining about for a long time.” He also expressed his support for an amendment that Amash supports which would require a “warrant before you target Americans because foreign intelligence warrants have a lower standard.”

Amash was roundly criticized by many in his own party after his stand on Saturday, including the House Freedom Caucus, which he helped found.