Missouri, Georgia, Mississippi, Kentucky, Alabama and Ohio have enacted abortion legislation in the past year, causing pro-choice advocates to speak out in an uproar of protests. Planned Parenthood and the ACLU filed a lawsuit Friday against Alabama abortion legislation. (RELATED: These Are The States That Have Passed Pro-Life Abortion Bills This Year)

But Rebecca Kiessling, a woman conceived through a brutal sexual attack on her mother, claims that lawmakers should punish rapists and not babies.

Kiessling is the founder and president of Save the 1, an organization dedicated to educate the public on saving the 1% of aborted babies conceived through rape.

“I was conceived when my birthmom was abducted at knifepoint by a serial rapist,” Kiessling told TheDCNF, explaining that her mother attempted to have illegal abortions twice.

“I was almost killed,” Kiessling said. “She backed out because it was illegal and fear for her own safety. Pro-choice when we met, she made it clear she would have aborted me if it had been legal.”

But Kiessling’s mother is no longer pro-choice. “Six years later she changed her ‘choice.’ Now, 30 years since we met, we are both thankful we were both protected from the horror of abortion.”

Kiessling wants lawmakers to know that their arguments against the lives of babies conceived in rape are dehumanizing and demoralizing to her — a woman who would not be here if her mother had not chosen life.

“It is absolutely dehumanizing and demoralizing when I hear politicians say that I deserved to die for the crime of the man who raped my mother.  I deserved equal protection.  I’m not a rapist’s child, I’m the child of a rape victim and my mother and I object to me being characterized otherwise.” 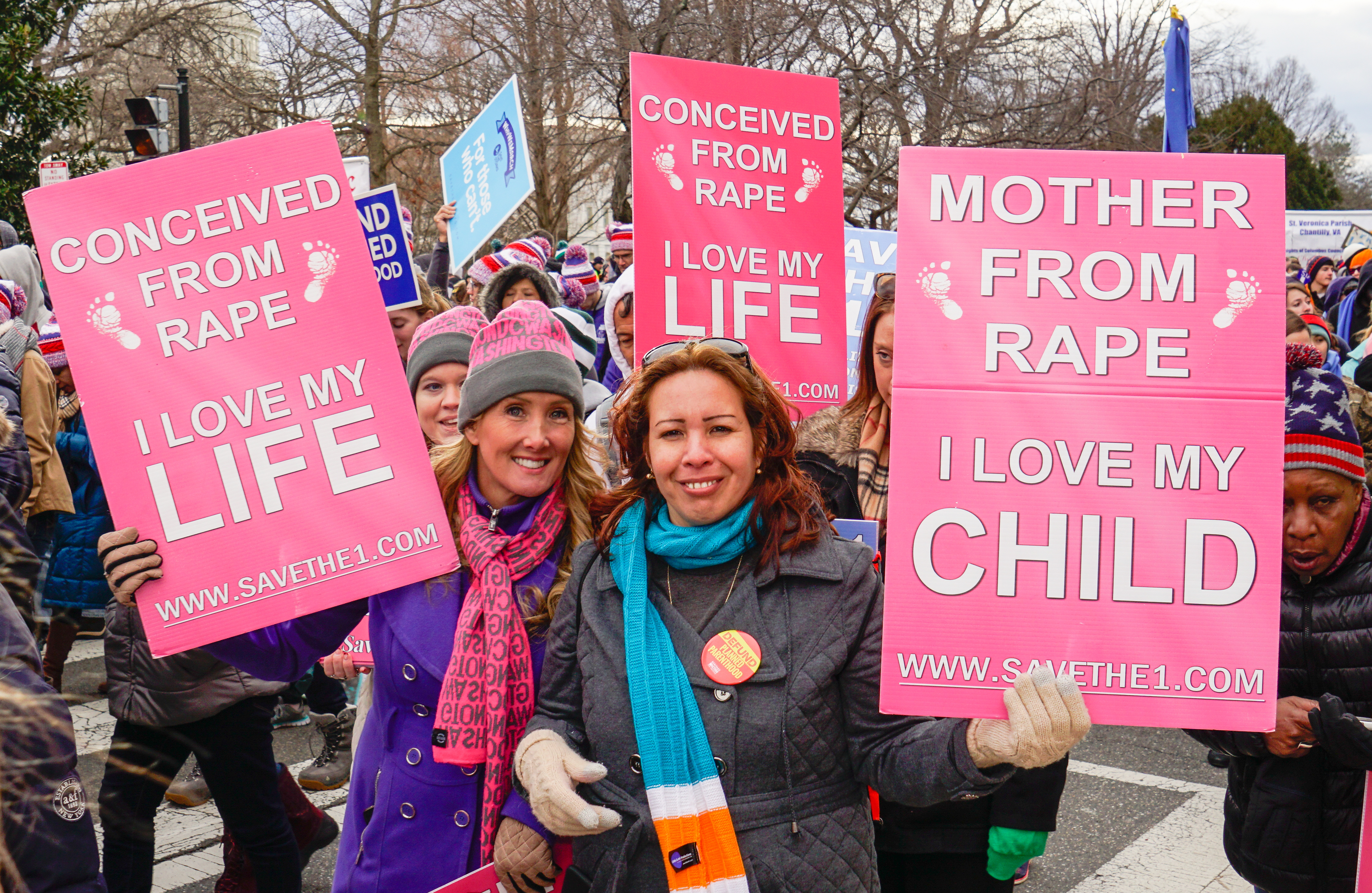 Washington, DC – January 27, 2017- Women holding signs advocate against abortion, even in the case of rape, during the annual March for Life. Xavier Ascanio, Shutterstock.

“So how is it that my group gets the death penalty?” Kiessling asked. “Punish rapists, not babies! It’s absurd to think more violence in a women’s womb will somehow bring healing.”

Kiessling’s Save The 1 is suing Georgia for the state’s discriminatory exceptions, and Kiessling said they also sued Iowa in 2018. Kiessling herself acted as one of the attorneys.

Patti Smith was also conceived through rape, and her mother also chose life. Patti looks forward to a time when society recognizes that all babies conceived are human beings.

“I hope that our society will realize that all babies conceived are human beings, and ALL babies DO have every right to life a happy and full life,” Smith told TheDCNF.

“There is no difference whatsoever between a baby born from rape and a baby NOT conceived from rape,” she added. “I’m so thankful that my birthmother believed that too and because she believed that I was a gift from God rather than a curse, she saw me just as I was and as I am now. A human being, born to be loved, not to be killed.”

Ryan Scott Bomberger, founder of The Radiance Foundation, a non-profit dedicated to educating society on the dignity of life, says that he is the one percent that progressives use to justify 100 percent of abortions.

“My biological mother was raped, yet she rejected the violence of abortion,” writes Bomberger in a piece to The Radiance Foundation. “I was adopted and loved instead. I’m not the ‘residue of the rapist,’ as Senator Vivian Davis Figures described those like me who were conceived in rape; I’m the resilience of my birthmom.”

“As an adoptee who grew up wanted and loved in a multiracial family of fifteen and as a happily married adoptive father with four children, I’m here to say there’s another side of this painful issue,” Bomberger added.

Bomberger believes that lawmakers should focus on punishing the real criminal in these situations: the rapist.

“Let’s be real here,” he writes. “Even if Alabama’s Human Life Protection Act had a rape and incest exception, the confused Handmaid’s Tale cosplayers would still be out in full force. Fake feminists need to exploit tragedy to promote their false equality. And they never seem to find space in their screeds to talk about punishing the actual criminal—the rapist.”

“I am the one percent that is always demonized and exploited,” Bomberger said. “But I’m part of a far larger collective of courageous and compassionate advocates for Life who believe in the radical notion that we all have equal and irrevocable worth regardless of how our lives began.”

Both Georgia and Alabama passed restrictive abortion legislation in 2019. Republican Georgia Gov. Brian Kemp signed a “fetal heartbeat bill” in March that will go into effect Jan. 1, 2020, banning most abortions in Georgia after a fetal heartbeat is detected. The bill makes exceptions in cases of incest and when the mother’s health is at risk. It also makes exceptions for rape, but only if the mother first files a police report.