Letters and emails suggest Vatican officials placed restrictions on defrocked Cardinal Theodore McCarrick as early as 2008, but failed to enforce these restrictions and allowed him to continue his high-profile work.

The Congregation for the Doctrine of the Faith declared McCarrick guilty in February of “solicitation in the Sacrament of Confession, and sins against the Sixth Commandment with minors and with adults, with the aggravating factor of the abuse of power,” according to a Vatican statement. He was also defrocked.

“After long consideration, I have made the decision to place in the public domain some of the correspondence and other information related to McCarrick that I possess in my many years of service to him,” Figueiredo wrote in the report.

“I would be part of the cover-up if I simply kept that correspondence to myself,” Figueiredo told CBS News.

Figueiredo said he decided to release the information on McCarrick on the 25th anniversary of his own ordination to the priesthood by McCarrick himself. Figueirdo worked as McCarrick’s personal secretary from 1994 to 1995 and then moved to work as a spiritual advisor at the American seminary at the North American College in Rome. From there, Figueirdo would assist McCarrick when the former cardinal visited Rome. 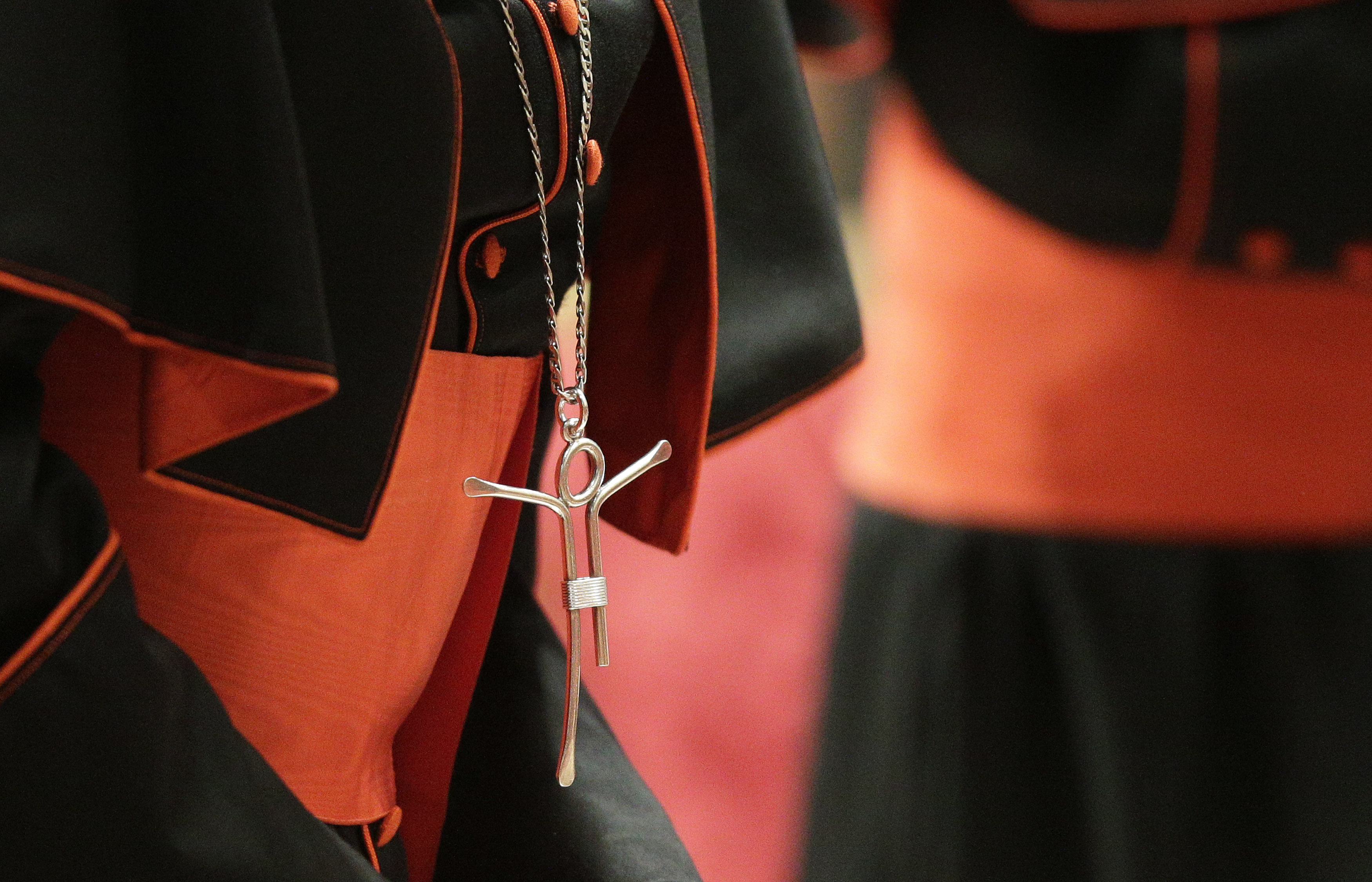 U.S. Cardinal Theodore Edgar McCarrick’s cross is seen as he attends a prayer at Saint Peter’s Basilica in the Vatican March 6, 2013. REUTERS/Max Rossi

A letter to Cardinal Giovanni Battista Re, Prefect Emeritus of the Congregation for Bishops, delivered to McCarrick on Aug. 22, 2008, said McCarrick was required to change residences and that the Holy See ordered him not to appear in public without permission.

“In summary,” McCarrick wrote to the Vatican official, “in the future I will make no commitments to accept any public appearances or talks without the express permission of the Apostolic Nuncio or the Holy See itself,” according to the report.

McCarrick wrote a Sept. 1, 2008, letter to Cardinal Tarcisio Bertone, then-secretary of the State of the Vatican, in which he discusses sharing his bed with priests and seminarians in their 20s and 30s, the Figueiredo Report said.

“I do recognize that in one particular [case] I had been at fault in an unfortunate lack of judgment,” McCarrick wrote, according to the report. “I have always considered my priests and seminarians as part of my family, and just as I have shared a bed with my cousins and uncles and other relatives without thinking of it being wrong, I had done this on occasion when the Diocesan Summer House was overcrowded. In no case were there minors involved, but men in their twenties and thirties.”

“I have never had sexual relations with anyone, man, woman or child, nor have I ever sought such acts,” the letter states.

An October email reveals McCarrick sent a copy of the letter he sent to Cardinal Re to Archbishop Wuerl, suggesting he made Wuerl aware of McCarrick’s actions and restrictions as early as 2008. Wuerl resigned from his position as cardinal in October 2018 after evidence of complicity in sexual abuse cover-ups in Pennsylvania.

Despite the restrictions, McCarrick continued his high-profile public work and continued to visit Rome, the correspondence shows. Figueiredo revealed McCarrick traveled and consorted with high-ranking officials and even royalty in places such as mainland China, Central Asia, Cyprus, the Balkans, the Middle East, Lebanon, the Holy Land, Morocco, Iraq, Iran, Kurdistan and the Philippines.

Comments made to Pope Francis indicate McCarrick found a warm reception in the pope, despite the restrictions and the reasons for these restrictions.

“When you greeted me so cheerfully in Washington as an adjunct member of the foreign service, I received this as a challenge to continue as an amateur in the very noble work of the foreign relations of the Holy See,” McCarrick wrote in a letter to the Holy Father.

“It is clear that for far too long, a culture has existed in the Church that allowed those like McCarrick to continue their public activity after serious and even settled allegations had come to the attention of Church leaders,” Figueiredo writes as he concludes his report. “Moreover, it is all too evident that Cardinals, Archbishops, and Bishops — in their cover up — until quite recently have enjoyed the propitious benefit of a more ‘forgiving’ and ‘lenient’ standard of evaluation as compared to those applied to lower ranking clerics and religious.”

“A double standard and non-independent accountability harm the credibility of Church leadership and impede efforts to reestablish fundamental trust in the Catholic clergy.”

The Vatican did not respond to a request for comment.