Attorney General William Barr says that official statements about the origins of the Trump-Russia investigation “are just not jiving” with information he has learned during his short stint in office.

“I assumed I’d get answers when I went in and I have not gotten answers that are well satisfactory, and in fact probably have more questions,” Barr said in an interview with CBS News, adding that “some of the facts that…I’ve learned don’t hang together with the official explanations of what happened.”

“[T]here’s some questions that I think have to be answered, and I have a basis for feeling there has to be a review of this,” he told CBS.

Barr is investigating government agencies’ surveillance activities against the Trump campaign, as well as the FBI’s rationale for opening a counterintelligence investigation against Trump associates in July 2016.

Barr caused a stir during a Senate hearing on April 9 when he said that he believed that “spying did occur” against the Trump campaign. He has since defended using the term “spying,” saying that there is nothing wrong with intelligence agencies spying. But he said he wants to find out whether there was a proper predicate for the surveillance and whether it was conducted legally. (RELATED: Barr: ‘I Think Spying Did Occur’ Against Trump Campaign)

The FBI used at least one informant, Stefan Halper, to make contact with Trump campaign advisers Carter Page and George Papadopoulos. It has also been reported that a woman who presented herself as Halper’s assistant during the Papadopoulos operation was actually a government investigator. 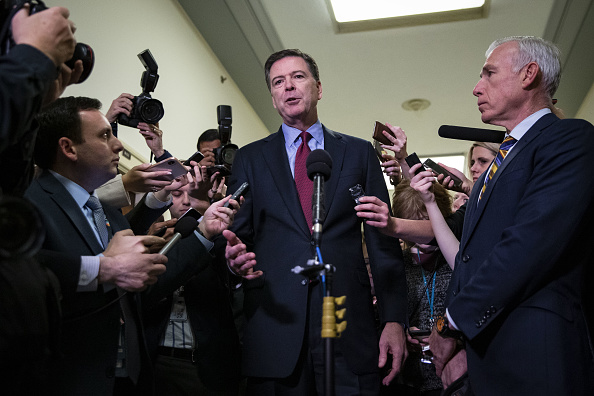 FJames Comey speaks to members of the media after testifying before the House Judiciary and House Oversight and Government Reform Committees joint investigation in Washington, D.C., U.S., on Friday, Dec. 7, 2018. Al Drago via Getty Images

It is still not clear which agency employed the investigator, who went by the alias Azra Turk. Barr is also looking into the FBI’s use of the infamous and unverified Steele dossier to obtain surveillance warrants against Carter Page.

Barr suggested that one area he is looking at is the timeline of government agencies’ interest in the Trump campaign.

“Things are just not jiving,” he told CBS.

Current and former FBI officials have claimed that the bureau’s counterintelligence investigation of the Trump campaign began on July 31, 2016, after receiving a tip from the Australian government regarding Papadopoulos.

Here is a partial transcript of Barr’s remarks, from CBS News:

WILLIAM BARR: Well, I’ll say at this point is that it, you know, I- like many other people who are familiar with intelligence activities, I had a lot of questions about what was going on. I assumed I’d get answers when I went in and I have not gotten answers that are well satisfactory, and in fact probably have more questions, and that some of the facts that- that I’ve learned don’t hang together with the official explanations of what happened.

JAN CRAWFORD: What do you mean by that?

WILLIAM BARR: That’s all I really will say. Things are just not jiving, and I’m not saying at this stage that–

JAN CRAWFORD: Was it a timeline?

WILLIAM BARR: There was a timeline, there’s some timeline–

JAN CRAWFORD: I mean, there’s a concern that this may have happened before we realized that the investigation was initiated in July. I mean, what…

WILLIAM BARR: I don’t want to get into those details at this point. I would just say that, you know…

JAN CRAWFORD: But you said there’s a timeline concern.

WILLIAM BARR: Well I won’t, I won’t confirm that, but I’ll just say that, you know, there’s some questions that I think have to be answered, and I have a basis for feeling there has to be a review of this.