Few firearm designs of the 20th century were as influential as the AR-10. Designed by the late Eugene Stoner in the mid-1950s, this 7.62×51 mm battle rifle helped spawn the entire AR series—arguably the most successful, and certainly the most prolifically imitated, long gun of the modern era. Retro guns are all the rage these days and, to help fill that market demand, Brownells has released an entire line of vintage-style ARs. Among them is the BRN-10, a semi-automatic reproduction heavily inspired by the famed ArmaLite rifle.

The BRN-10 is available in two models. The BRN-10A uses distinctive brown polymer furniture that approximates the appearance and feel of the earlier guns, including the Sudanese rifles produced in 1958. The BRN-10B model, which features black furniture and a lightweight barrel, is based on later export rifles, such as the Portuguese model. Our BRN-10A test rifle featured brown furniture that included a Type D fixed buttstock, a two-piece handguard and an AR-15-style pistol grip. A more faithful reproduction of the AR-10’s period-correct pistol grip is available from Brownells, and may be included on future models. 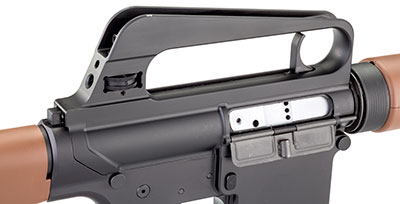 Like the original AR-10 design, the BRN-10A’s trigger-style charging handle rides vertically inside of the upper receiver’s integral carry handle.

The heart of the BRN-10 is an upper and lower receiver that are completely machined from 7075-T6 aluminum barstock rather than forgings. These receivers mimic the classic lines of 1950s-vintage AR-10s, including the slab-sided magazine well on the lower and the fixed carry handle on the upper. The rifle is compatible with DPMS/SR-25-pattern magazines and will not accept current-production Magpul PMAGs. The BRN-10 ships with a 20-round aluminum magazine, and, to maintain the period-correct appearance, Brownells is marketing a waffle-style aluminum version as well.

BRN-10As are equipped with a heavy-contour 20″ barrel that is fluted aggressively under the handguard and is chambered in .308 Win. rather than 7.62×51 mm NATO. The 4150 alloy steel barrel is black-nitrided inside and out using the quench-polish-quench process, and is then top-coated in a finish that replicates the vintage manganese phosphate treatment. Nitriding the barrel helps it resist both wear and corrosion. The included flash hider is an open, three-prong design that borrows from the lines of the original Dutch models.

Like the original, the BRN-10 is equipped with adjustable iron sights and with no provision for mounting an optic. The fixed front sight is mounted on the distinctive triangular fitting that also serves as the gas block as well as the forward sling mount. The rear aperture rides inside of the protective ears of the carry handle, is drift-adjustable and is held in place by an 8/32″ set screw that can be accessed via a milled slot. Elevation adjustments are made using a standard A2-style drum, which uses 0.5-m.o.a. clicks.

The controls on the BRN-10 will be familiar to any user of AR-pattern rifles, with a few notable deviations. For starters, the trigger-style charging handle rides vertically inside the carry handle slot, just as it did on Stoner’s original rifles. This ambidextrous, non-reciprocating handle is held in place by detents to prevent it from moving under recoil. For this reason, the user must pull back on the charging handle with more force than is required on more modern examples. Brownells recommends charging the rifle with the butt seated on the shoulder or under the armpit, snapping the charging handle smartly to the rear and releasing it to seat the bolt.

The rifle’s three-prong flash hider produces a distinctive ringing sound upon firing, a tone that will be nostalgic among those with experience shooting older ARs.

There is no forward assist or brass deflector on the BRN-10, since those features were incorporated much later in the evolution of the AR series to address problems with early examples of the AR-10’s descendant, the M16. The magazine release is in the traditional location above the trigger guard on the right side of the lower receiver and notably lacks the fencing found on later models. A fact that is not well-known is that the selector/safety switch on original AR-10s operated in reverse of modern ARs. Likely due to safety concerns and for manufacturing efficiency, the BRN-10’s safety operates identically to a modern AR. With the lever oriented rearward, the rifle is on “safe”; with the lever facing downward, the rifle is ready to fire.

The BRN-10 uses the beefy bolt carrier arrangement that is scaled to the .308 Win. cartridge, and includes the distinctive flat sides found on the original models. The rear of the carrier uses the two stabilizing flanges found on 1950s ArmaLites, a feature that has been removed from modern guns. The bolt is machined from a billet of 9310 steel, a tough alloy that responds well to heat-treating. Unlike the parts on the originals, these bolts are magnetic-particle-inspected to ensure that no metallurgical flaws are present. The entire bolt carrier group is chrome-plated, making cleaning an easy chore.

We tested the BRN-10A with three .308 Win. loads of various bullet weights, and found the rifle to be 100 percent reliable. The limitations on the rifle’s accuracy were likely a function of the shooter’s ability to shoot groups with iron sights rather than any mechanical shortcoming.  Recoil was manageable and muzzle rise was minimal, likely thanks to the buffer system and straight stock design. The open-prong flash hider gave the rifle the tuning-fork-like “ring” upon firing, a sound that will be nostalgic among those with experience shooting older ARs. 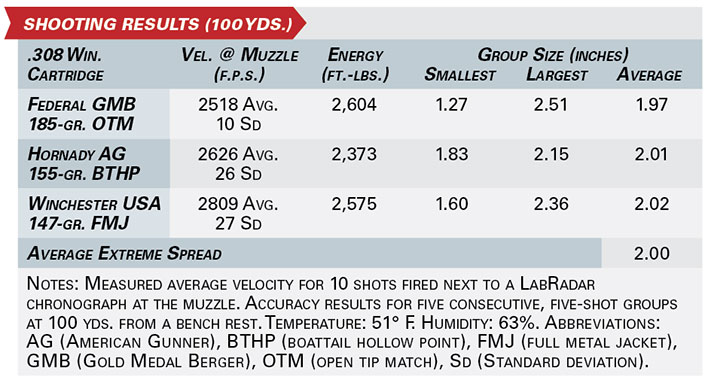 The one issue that was encountered during testing was the inability to achieve an exact 100-yd. zero; points of impact remained 5″ to 6″ high, even with the rear sight in its lowermost position. Brownells built the front sight to the original AR-10 specs on early guns, including our test sample, but has re-engineered the front post on subsequent rifles to address this issue. We did not encounter any noticeable heating of the handguards during our testing, but, in response to some end-user input, Brownells has developed optional accessory handguards that include aluminum heat shields.

Despite mimicking the features of a rifle engineered six decades ago, the BRN-10 is a serviceable and capable rifle. The fact that this design has withstood the test of time is a true testament to the genius of its designer. Original ArmaLite examples are extremely scarce and expensive, making this reproduction the only feasible ownership avenue for most shooters. The BRN-10A is not an exact facsimile of the original, but it faithfully and accurately represents the overall look, feel and function of the early AR-10.

1
Black Firefighter Spent His Life Savings To Open A Bar. Then Minneapolis Looters Burned It Down
US
2
Trump's Approval Rating Achieved Something Unprecedented. Here's What It Means For November
Analysis
3
Rioters Descend On Cities Across America To Exact Vengeance Over George Floyd's Death
US
4
Armed Citizens Stand Guard Against Looters In Minneapolis
US
5
A Soldier Stopped A Shooting By Running Over The Gunman With His Car: 'I Wasn’t Necessarily Frightened'
Military