The two talked about what exactly that service entailed, and how it compares to presidential candidates both past and present on Fox News’ “Tucker Carlson Tonight” Tuesday.

Van Buren wrote in an op-ed for The American Conservative that he believes the South Bend, Indiana, mayor is “milking his service” to gain political advantage.

“Pete Buttigieg is only 37 years old, but according to his many many fans on cable television, he has already gained a remarkable amount of decency and wisdom, much more than you will ever have,” Carlson said as he began the segment. “The question is, how did Saint Pete get so darned good? It wasn’t just his time at Harvard. It was also service in the U.S. military, especially his service in the U.S. military. He thinks that.”

Carlson explained how Buttigieg uses his service to bash Trump “because only bad people avoided the Vietnam draft,” while neglecting to critique other Democratic candidates like Bernie Sanders and Joe Biden in a similar fashion. (RELATED: Richard Grenell: Buttigieg Engaging In Smollett-Style ‘Hate Hoax’ Against Pence)

“There’s a larger question here. Is Peter Van Buren pointed out, if Trump’s military record is fair game, well then so is Pete Buttigieg’s,” Carlson said before quoting from Van Buren’s piece:

Buttigieg did all of six months in 2014 as a reservist deep inside Bagram Airfield, mostly as a personal driver for his boss, locked and loaded inside a Toyota Land Cruiser. It is unlikely he ever ate a cold meal in Afghanistan.

But Mayor Pete is milking his service for all it is worth politically, stretching a short tour into civics lessons he suggests can’t be learned any other way.

“So, what you’re saying,” Carlson told Van Buren, “is that Pete Buttigieg is basically inflating his experience abroad and using it as a moral cudgel to crush his political opponents.” 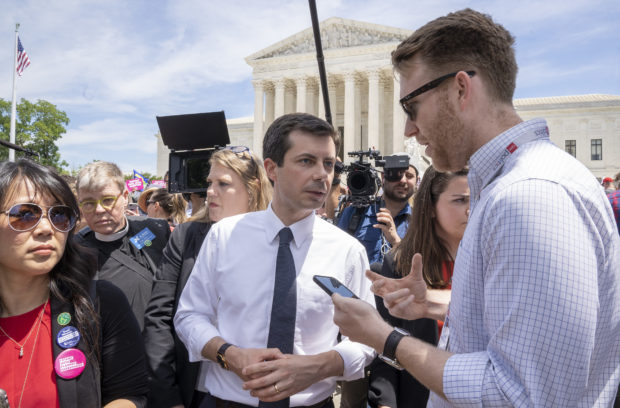 WASHINGTON, DC – MAY 21: Democratic presidential candidate and mayor of South Bend, Indiana Pete Buttigieg speaks to a reporter at a pro-choice rally at the Supreme Court on May 21, 2019 in Washington, DC. (Photo by Tasos Katopodis/Getty Images)

“Absolutely,” said Van Buren. “He’s getting an awful lot of juice out of a very weak squeeze.”

Van Buren and Carlson then discussed the hypocrisy surrounding Buttigieg’s use of his own military service versus those who did not serve or even those, like fellow 2020 presidential candidates Seth Moulton and Tulsi Gabbard, whose tours were much more distinguished.