Is there a practical way to increase a 9 mm Luger-chambered pocket pistol’s ammunition capacity without spoiling its easy-to-conceal profile? This is exactly what the company Full Conceal set out to do with its M3 series of folding pistols and aftermarket conversions. The M3D design is fairly straightforward; by modifying the grip of a Glock 19 to fold up against the dustcover, the pistol can be slipped into a pants pocket or a belt pouch that would otherwise be too small to contain it. The factory sights, slide assembly, barrel and internal safeties are all left intact. The M3D conversion primarily involves modifications to the trigger, trigger guard and grip frame. 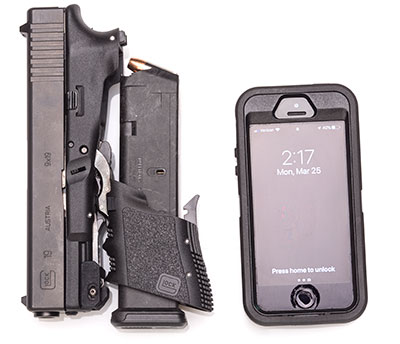 When folded, the Full Conceal M3D isn’t much larger than a modern smart phone.

The Glock’s one-piece polymer frame is carefully cut from front to back to completely release the grip frame from the upper frame. A 0.10″ gap between the two sections of the frame ensures the grip will lock firmly back into place despite the presence of any dirt or debris. The grip is re-attached to the upper frame via a milled-steel hinge that also supports the folding aluminum trigger.

The polymer trigger guard is removed completely and replaced with a set of hinged aluminum rails that fold up into the pistol’s dustcover when the grip swings forward. The accessory-rail-mounted GRD, or Grip Retention Device, is a polymer catch that retains the front end of the folded trigger guard. This prevents the grip from swinging open until intentionally pressed into service. All of the M3D modifications are secured to the frame using stainless steel pins.

(l.) A release lever in its backstrap (arrow) locks the frame in its unfolded position. (ctr.) Retaining all of the base gun’s factory internal safeties, the M3D’s folding trigger broke after 6 lbs., 6 ozs., of pressure, with a short reset and no mushiness. (r.) The Grip Retention Device is a polymer catch that retains the front end of the trigger guard when the pistol is folded.

The Glock’s backstrap channel is plugged and fitted with a spring-operated aluminum release lever that locks the grip frame into its unfolded position. This same lever is depressed in order to release the grip so that it can be folded. The grip frame is shortened so as to be nearly flush with the pistol’s muzzle when in the stowed position.

The gap between the top of the grip and the back wall of the magazine well (just below the rear sight) provides enough room for an extended magazine. The Gen3 G19 9 mm Luger M3D conversion evaluated for this review ships with a 21-round Magpul PMAG GL 9 magazine that is just slightly shorter than the G19 slide. When folded and pocketed with this magazine in place, the pistol presents a profile similar to that of a large smart phone.

One of the most important questions in our minds was whether or not the M3D could be safely carried with a round in the chamber. Company representatives assured us that not only are all of the factory-original safeties still in place and operational, including the drop safeties, but the M3D has the added safety provided by a folding trigger that cannot be touched or bumped when the grip is folded. This means that when the pistol is drawn from concealment, the only action required to make it ready to fire is to lock the grip in place. The magazine automatically aligns and seats when the pistol is assembled.

The time spent on the range shooting this modified G19 was mostly familiar and uneventful. It is only the process of swinging the grip into place and the feel of the trigger that makes it different. The folding aluminum trigger is best described as having a two-stage operation. After a slight take-up with a firm stop, the trigger broke with 6 lbs., 6 ozs., of pull. This means the trigger pull was nearly a pound heavier than the Glock-factory standard (5 lbs., 8 ozs.), but it did not have the mushiness typical of striker-fired guns. Reset was short and distinct. 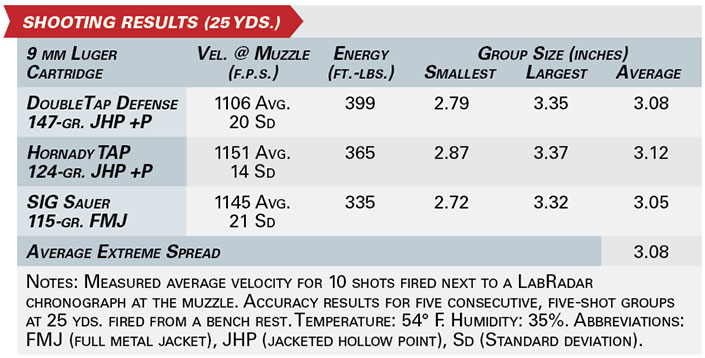 Once locked in the unfolded position, the M3D shoots and operates just like any other G19, albeit with a slightly shorter grip. The sights were the same, the felt recoil was the same and all of the controls operated in typical Glock fashion. Best of all, the pistol ran flawlessly with all of the various types of ammunition and magazines tested.

In addition to complete, already-converted guns, Full Conceal also offers conversion of customer-supplied Compact and Slimline Glock Gen3 and Gen4 models including (but not limited to) the G19 (9 mm Luger), G23 (.40 S&W), G32 (.357 SIG) and G38 (.45 GAP). Needless to say, some shooting enthusiasts have been skeptical of the M3D system. Full Conceal is a fairly new company performing a heretofore unheard of modification to an iconic striker-fired, polymer-framed pistol that many consider to be the gold standard for its class.

However, by building the M3D folding grip system into an existing pistol with a simple design and a proven track record for reliability, Full Conceal has avoided the need to re-invent the wheel with an all-new platform. Based on this evaluation, the M3D conversion does not interfere with the host Glock’s reliability or the operation of its controls. In short, this modification allows Compact Glocks to be carried in pockets and purses they haven’t fit in before, and is worth a look by those interested in these modes of carry. 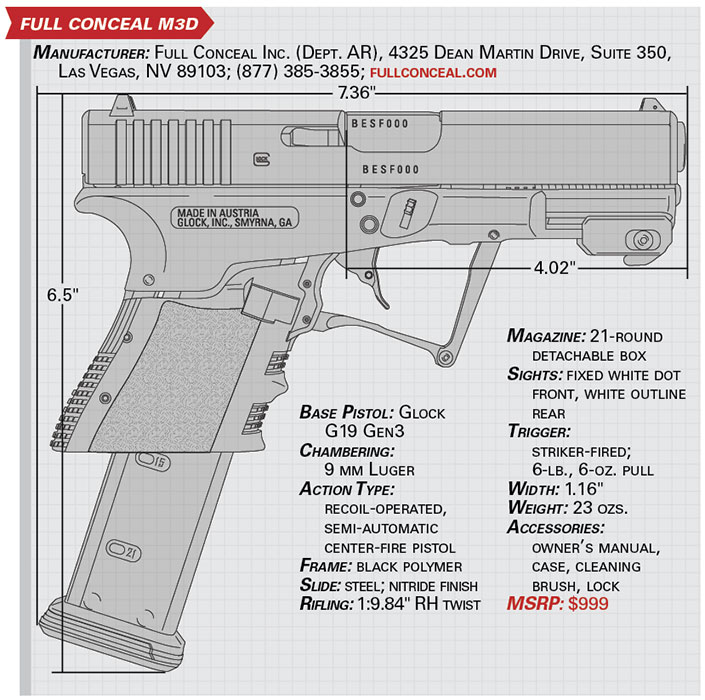