Democratic presidential candidate Elizabeth Warren said she wants the head of the Justice Department’s antitrust agency to recuse himself from a big tech probe, saying his “past work as a lobbyist” for Google and Apple “creates the appearance of a conflict of interest.”

The company paid Delrahim’s former law firm Brownstein Hyatt Farber Schreck $100,000 for its efforts, according to the records.

The Federal Trade Commission in 2007 approved the $3.1 billion purchase of DoubleClick in 2007. Delrahim, who heads the antitrust agency, also lobbied on behalf of Apple, though the company paid his firm substantially less than Google, federal records show.

Warren, a Massachusetts senator who is running for president in 2020, is calling on Delrahim to recuse himself from any probes into the giants.

“Your past work as a lobbyist for two of the largest and most scrutinized tech companies in the world creates the appearance of a conflict of interest,” Warren wrote in a letter to Delrahim. “As the head of the antitrust division at the DOJ, you should not be supervising investigations into former clients who paid you tens of thousands of dollars to lobby the federal government.”

Such a probe would be the first since the Federal Trade Commission conducted an investigation of Google but closed it in 2013 without taking action. The FTC and DOJ have discussed which agency would oversee a probe of the internet giant — the commission agreed to give DOJ officials jurisdiction, media reports show. 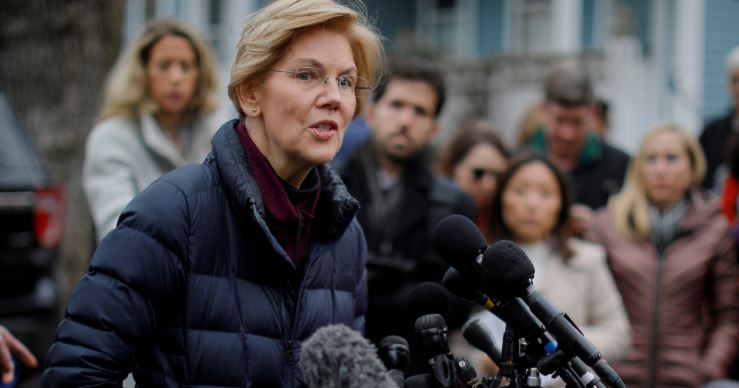 U.S. Senator Elizabeth Warren (D-MA) speaks to reporters, after announcing she has formed an exploratory committee to run for president in 2020, outside her home in Cambridge, Massachusetts, U.S., December 31, 2018. REUTERS/Brian Snyder

News of his past work with the tech titans could disrupt a possible DOJ-lead investigation and lead to partisan bickering about the administration’s intentions. (RELATED: Trump’s DOJ Prepares An Antitrust Investigation Into Google’s Business Practice: REPORT)

House Democrats are pushing a similar probe. The probe, which was announced by Democratic Rep. David Cicilline of Rhode Island, is expected to be far-reaching and comes as Democrats and Republicans are growing critical of Silicon Valley. The investigation will not focus on any one company, Cicilline told reporters during a June 3 press conference.

Some analysts said the DOJ probe is theater performance, a type of political ploy designed to upstage a Democratic investigation.

“I wonder whether the other three are just kind of a smokescreen,” Thomas Struble, a tech policy analyst at R Street, told The Daily Caller News Foundation in a June 4 interview, noting that the strongest antitrust case is against Facebook and its side features.

The DOJ, Google and Apple have not yet responded to TheDCNF’s request for comment.