Hospitals in Rockland County, New York have been a little more crowded than usual this year.

It’s not because more people have moved there, nor the emergence of a new disease. An old illness, declared eliminated in the United States in 2000, is prompting record numbers of residents to seek medical attention: measles.

Medical staff has done its best to keep up. Hospitals such as Montefiore Nyack have implemented pre-arrival measles alerts to prepare doctors for providing assistance to patients seeking care. Still, the recent outbreak — the worst in the U.S. in over a quarter-century — has sent shockwaves through the community.

“Due to Rockland’s small geographic size, exposure to the highly contagious measles virus may occur anywhere in the county,” said Dr. Patricia Schnabel Ruppert, county commissioner of health, in an interview with local paper The Journal News.

“For the measles, some hospitals in New York are asking visitors to show their identification. They immediately place a mask on the potentially infectious patient and isolate them,” Dr. Valerie Perel, attending physician at New York University School of Medicine, told The Daily Caller. (RELATED: CDC Confirms Largest Measles Outbreak Since Disease Was Declared Eliminated)

The spread has not been contained within Rockland County lines either. It exploded across the state and subsequently swept the country, infecting 1,022 in its path. Virginia and Idaho became the latest states to fall victim to the outbreak last week, bringing the grand total of affected states to 28, according to the Centers for Disease Control and Prevention. 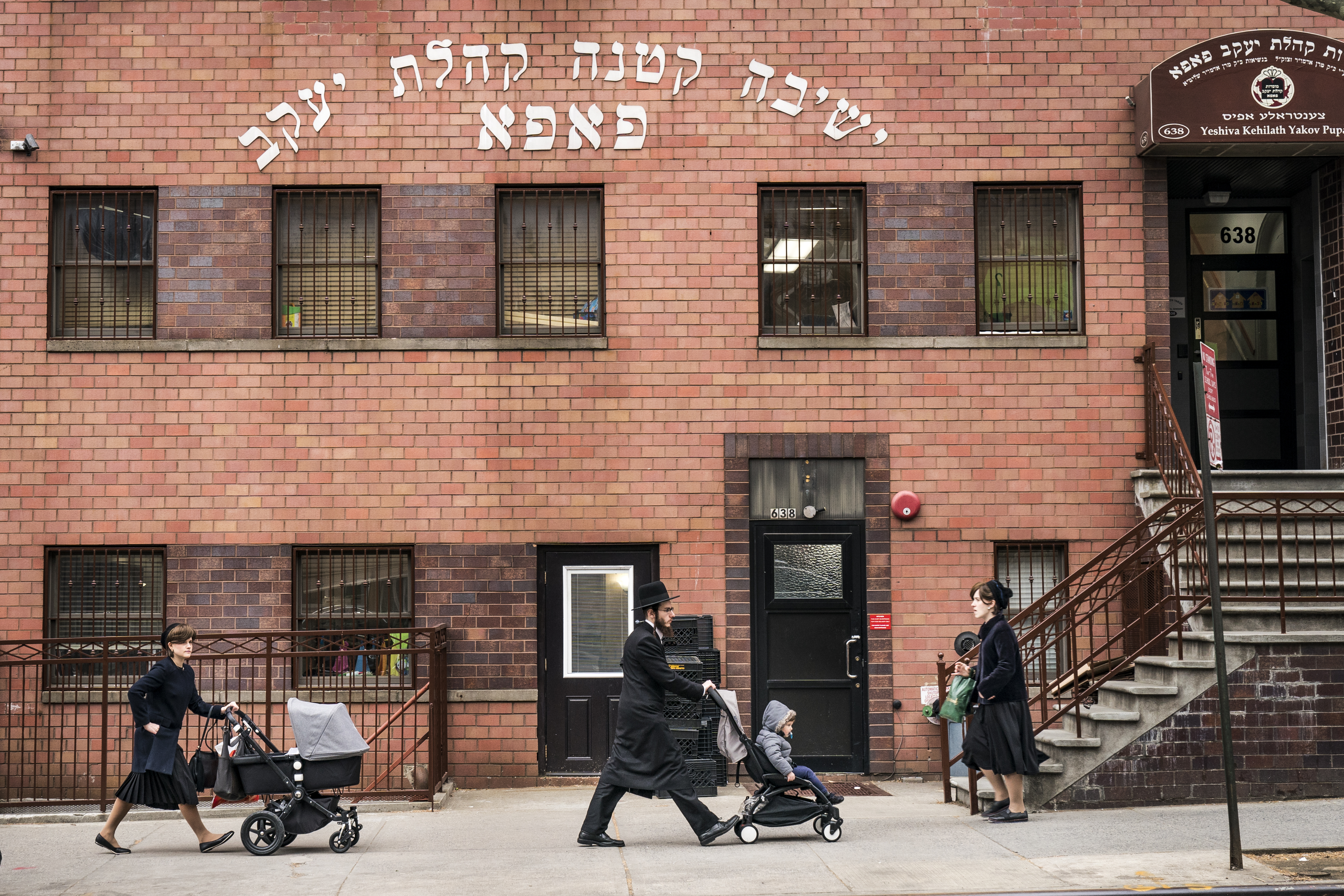 NEW YORK, NY – APRIL 9: Pedestrians walk past the Yeshiva Kehilath Yakov School in the South Williamsburg neighborhood, April 9, 2019 in the Brooklyn borough of New York City. New York City has ordered all yeshivas in a heavily Orthodox Jewish section of Brooklyn to exclude from classes all students who aren’t vaccinated against measles or face fines or possible closure. The order comes amid a recent outbreak of over 285 measles cases in Brooklyn and Queens, most of which have been concentrated in the Orthodox Jewish communities. (Photo by Drew Angerer/Getty Images)

“Like most viruses, there is no pill or other kind of treatment that will cure the disease,” said Dr. Joanne M. Willey, professor of biomedical science and chair of the Department of Science Education at Hofstra University’s School of Medicine. “Hospitals have had to provide the kinds of strict isolation rooms to prevent transmission to other patients who may not be vaccinated.”

Many have been left asking how a disease eliminated from U.S. soil 18 years ago has come back from the dead, and how it has spread so rapidly throughout the country. The answer is part medical science, part social perception.

“Measles is transmitted by airborne droplets from someone who is coughing or sneezing,” explained Dr. Willey. “Droplet transmission means that measles viruses, which are so small they can only be visualized by electron microscopy, are encased in the moisture released during coughing and sneezing. This moisture allows them to be infectious for up to about 2 hours after leaving the infected person’s respiratory system.”

About 90 percent of individuals within three feet of someone who has the virus will become infected, she said.

The disease can also remain dormant in an infected individual’s body for up to four days before the telltale rash starts showing, leaving a big window of time for someone to spread the illness before they even know they have it.

“The beginning of the measles disease feels like a cold,” said Dr. Willey. “The individual has no idea that they are shedding literally billions of virus particles, so they go out in public and … you know.”

While measles was declared eliminated in the U.S., it remains a deadly illness across the planet. Approximately 10 million people contract the disease and 110,000 die from it each year, according to the CDC. It can still be contracted in the United States, primarily as a result of international travel. Two-thirds of travelers that contribute to the domestic spread of the disease are Americans.

It is common for a couple cases of an eliminated disease to emerge each year, but this latest wave of measles is unprecedented, both in its volume and in the substantial geographical area that it covers. Health officials attribute the sudden outbreak to the growing trend within some communities to invoke religious or philosophical exemptions to vaccination, on the unsupported basis that injections can cause autism.

The measles vaccination, which was introduced in 1971, is 97 percent effective in defending against infection after two injections have been completed, according to CDC. All 50 states and Washington, D.C., mandate vaccination, but the “religious or philosophical exemption” loophole makes the mandates largely ineffective.

Politicians and health experts alike are now looking to eliminate exemptions and mandate the measles injection for all babies born in the U.S., a controversial movement in some ultra-religious circles. (RELATED: Measles Outbreak Is Wreaking Havoc, Officials Report 71 New Cases)

New York City Mayor Bill DeBlasio declared a “public health emergency” when the disease picked up traction in parts of Brooklyn in April, and required all non-vaccinated individuals living in the infected Williamsburg neighborhood to seek immediate vaccination. Anyone who ignored the order was subject to a $1,000 fine.

“This outbreak is being fueled by a small group of anti-vaxxers in these neighborhoods,” said DeBlasio’s health commissioner, Dr. Oxiris Barbot, at the time of the mandate. “They have been spreading dangerous misinformation based on fake science.”

New York joined California, West Virginia, Mississippi and Arizona last Thursday in passing a bill that ended nonmedical vaccination exemptions in an attempt to prevent another outbreak in the future.

“It’s time for New York to confront this public health crisis head-on,” said bill sponsor and Democratic state Sen. Brad Hoylman from Manhattan. “[We need to] end exemptions for vaccines across New York State, except when it is medically necessary. We can’t afford to wait a minute longer.”

The was signed by Gov. Andrew Cuomo, who expressed his support for the legislation throughout the process. 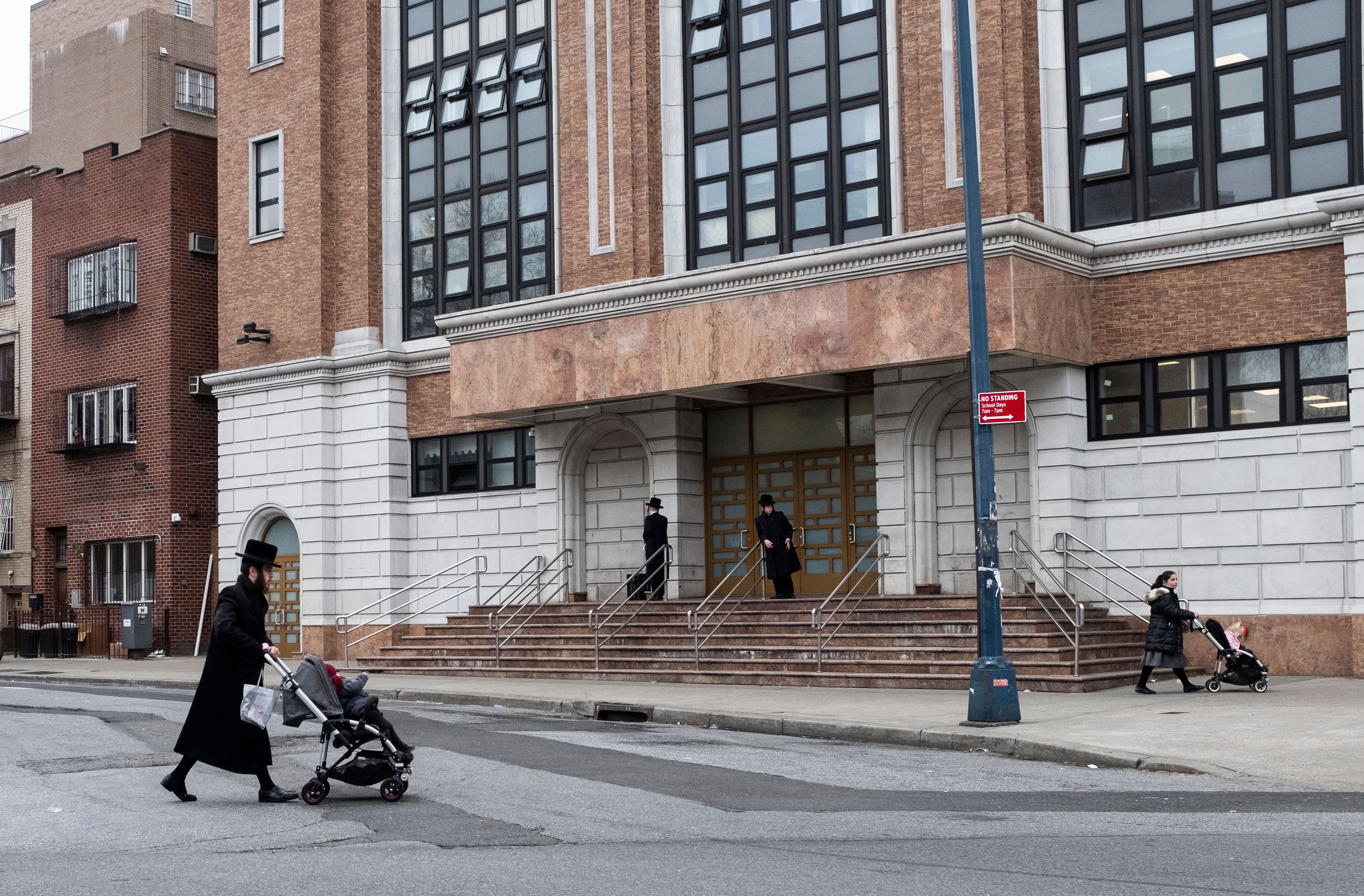 A Jewish man pushes a stroller across a street in a Jewish quarter in Williamsburg Brooklyn on April 9, 2019 in New York City. – New York Mayor Bill de Blasio declared a public health emergency across part of Brooklyn, ordering all residents receive the measles vaccine in a bid to contain an outbreak of the disease. In New York, an Orthodox Jewish community in Brooklyn has been hardest hit. They were infected by visitors from Israel, where an outbreak of measles began a year ago. (Photo by Johannes EISELE / AFP) (Photo credit should read JOHANNES EISELE/AFP/Getty Images)

“It’s a public health crisis,” he told reporters shortly before the bill passed through the Legislature. “I understand freedom of religion. We all do. We respect it. I’ve heard the anti-vaxxers theory, but I believe both are overwhelmed by the public health risk.”

Now that it has officially become law, the controversial measure is subject to a court challenge by groups seeking to test the legality of requiring vaccines, even for those who are religiously or philosophically opposed. While no case has arisen recently to serve as a guide for handling the decision, the legal precedent for state vaccine requirements goes back over a century. (RELATED: Anti-Vaxers Are Using A Classic Brady Bunch Episode In Their Pushback Against Vaccines)

In a 1905 case regarding Massachusetts’ implementation of a smallpox vaccine requirement, the Supreme Court upheld the state’s mandate against an argument by a religious leader that the measure violated his constitutional rights as enshrined in the preamble.

Oregon’s House passed a bill similar to the New York proposal last month after mass protests from anti-vaccination activists who claimed the bill was analogous to “selling our children to the pharmaceutical companies.” The bill is now in the state’s Senate Committee on Health Care for further consideration.

Connecticut is also primed to move forward with legislation closing exemption loopholes from vaccination mandates after the state’s Department of Health found that over 100 schools had measles vaccination rates below the standard 95 percent. Connecticut’s attorney general issued a statement greenlighting the state’s attempts to mandate vaccination, finding “no serious or reasonable dispute as to the State’s broad authority to require and regulate immunizations for children.”

Dr. Willey, who supports the recently passed New York legislation and other similar bills being floated across the country, emphasized the full extremity of the stakes.

“It is a pretty simple argument. It is the duty of the state to protect its citizens,” she said. “Remember that children who are susceptible to infection are not just the kids of parents who oppose vaccines, but children who are medically unable to be vaccinated because of an underlying immune disease and babies under the age of one … There is no cure for measles, and complications can include not only pneumonia but brain damage and death.”