A SWAT team of two snipers was stationed on the roof of a public library in Spokane, Washington June 15. Their mission, along with 30-40 police officers, was to defend Drag Queen Story Hour from 300 concerned mothers and allies protesting the event.

The snipers, decked out in camouflage, were photographed on the roof of the library monitoring the protesting mothers with binoculars.

“Was anyone else disturbed that the library had 30+ police officers and 2 snipers with rifles on the roof pointed at us to protect men in dresses from women defending their dignity and praying?” 500 Mom Strong, the organization protesting Drag Queen Story Hour, said on their Facebook page following the event.

There was also a counter-protest in support of the story hour that numbered in the hundreds. The counter-protesters “yelled and screamed” at 500 Mom Strong, Anna Bohach, who organized the protest against Drag Queen Story Hour, told the Daily Caller.

Women from 500 Mom Strong were photographed praying the rosary on their knees as police offers stood guard behind them.

Pastor Afhsin Yaghtin of New Covenant Baptist Church was arrested for obstructing an officer after he told police he should be allowed to protest next to the library, instead of across the street in the designated protest space for 500 Mom Strong, according to ChristianNews.net.

Bohach told the Caller a city councilman informed her the snipers were from a SWAT team. She believes the significant armed presence for the story hour could be a result of the counter-protest organization, 500 Drag Queen Strong, filing false police reports that her group made death threats against them.

Scott Herndon, an ally of 500 Mom Strong, attended the Drag Queen Story Hour on June 15. In a Facebook post, he detailed his experience at the story hour.

“She casts off her clothing in front of two and three-year-olds and four-year-olds, with her hairy armpits and her huge breasts pouring out of her minimal top, and now she’s gonna read this story,” Herndon said, describing a moment in which drag queen Andrea Tate removed an outer layer of clothing during the story time.

Herndon explained there were no microphones at the twenty-minute-long story hour, so “you couldn’t tell a word she was saying.” (RELATED: Houston Public Library Apologizes For Allowing Sex Offender To Read To Kids During ‘Drag Queen Story Time’)

Prior to the story time, Tate, a female drag queen, filmed a video response to 500 Mom Strong’s planned protest in which she was visibly angry and used profanity.

“Spokane is not the frickin’ South in the goddamn ’50s,” she said, adding, “I will not allow this to be a win for bigots.”

Bohach told the Daily Caller she believes drag “subjugates women,” “sexualizes young children” and sends the message that “men are made better than women.” 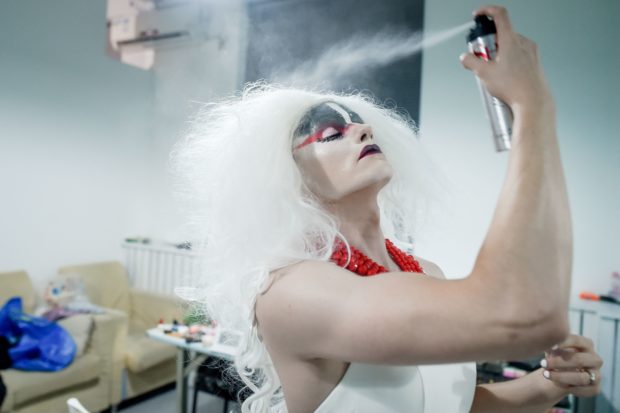 Justine Daily, a supporter of Drag Queen Story Hour, brought her two children, Shannon, 13, and Sean, six, to the story time. Shannon identifies as gay and Sean wore a dress to the event “after learning about those who oppose it,” Daily told the Spokesman-Review. Her husband, Goff Daily, told the Review, “If Jesus was around today, he would be on this side.”

The same library is hosting another Drag Queen Story Hour June 22. Protesters on both sides intend to come out again in the hundreds. The national media will also be present, 500 Mom Strong says on their Facebook.

Bohach told the Caller that a city councilman has informed her that the FBI and US Marshalls will also be present at the story time.