Designed to be competition-ready right out of the box, the new Arex Rex Alpha possesses all of the refinements necessary for a shooter to be successful in IPSC and USPSA production division events. Billed as the next evolutionary step to the company’s service-style Rex Zero 1S pistol, the Alpha—which is being imported into the country by FIME Group—features superior ergonomics, enhanced reliability and match-worthy accuracy.

Arex is a defense manufacturing company located in Slovenia just outside the capital city of Ljubljana. Revered for its technical expertise, high-tolerance machining capability and stringent quality control, Arex introduced its first handgun to the U.S. market back in 2017. The new Rex Alpha is a semi-automatic pistol with an exposed hammer that uses a traditional double-action/single-action trigger. It fires from a locked breech, using a modified Browning linkless lockup, with the barrel’s breechblock locking into the slide’s ejection port. Three magazines included with the gun have a capacity of 17 rounds each, though 20-round magazines are available.

To make the Rex Alpha suitable for competition, Arex machines its frame from chrome-moly steel. The solid-steel frame provides the necessary weight to help minimize recoil and allow the shooter to place shots on target more quickly. The weight of the Alpha with an unloaded magazine is a hefty 42 ozs. For those interested in using the Alpha as a tactical gun, there is a MIL-STD 1913 Picatinny rail on the dustcover for mounting lights/lasers. The slide rails run the entire length of the frame top.

The all-steel Rex Alpha operates via a modified Browning linkless lockup, with the barrel’s breechblock locking into the slide’s ejection port.

Ergonomics are very important to the gun’s shootability, and the Rex Alpha is designed to place the shooter’s hand closer in line with the pistol’s bore to minimize muzzle flip. The Alpha has an integral, highly swept beavertail, and a there is a relief cut at the juncture of the frontstrap and trigger guard. The exaggerated arc of the gun’s backstrap forces the shooter’s hand up into the beavertail for the highest hold possible. With a firm firing grip, the bilateral thumb safeties are easily manipulated. The thumb safeties disengage the trigger bar when in the “up” position, and the gun can be loaded and unloaded with the safety engaged. Arex outfits the Alpha with a magazine release that can be activated from either side of the gun. Coarse machine checkering provides texture on the Alpha’s frontstrap, and a magazine funnel is machined into the steel frame.

Double-action trigger pull is 10 lbs., 8 ozs., and the single-action pull breaks at 3 lbs., 8 ozs. In an effort to help the shooter find the optimal pull weight, Arex ships the gun with two extra hammer springs that will either increase or decrease the double-action pull weight by a pound. Trigger travel for double-action mode is 0.40″, and the reset for the single-action mode is a very short 0.07″. All of the fire-control components are given a nitrocarburization treatment that increases their surface hardness and also provides a degree of corrosion resistance and lubricity. 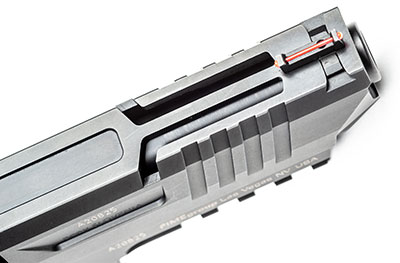 Lightening cuts in the slide allow the pistol to cycle even light target loads.

The Alpha uses a 5″ barrel and slide, and the extra length allows for increased velocities compared to shorter, service-style guns—an important consideration for shooting sports that have minimum power factors. Arex machines the Alpha’s slide from chrome-moly steel barstock, and the finished piece is given a nitrocarburized finish. It has fore-and-aft cocking serrations and a number of interesting machining cuts designed to lighten the slide so that it cycles with even relatively light 9 mm Luger target loads. An internal extractor is used. Both sights are dovetailed into the slide, and the front sight has a florescent-red, fiber-optic insert that glows brilliantly in sunlight. The black rear sight is adjustable for both windage and elevation.

Arex makes its own barrels using solid barstock and the cold-hammer-forging process. They are of supported design with an integral feed ramp. Like the frame and slide, the barrel is processed with a nitrocarburized finish that should hold up to the voluminous amount of rounds competitive shooters fire in matches and practice. A single recoil spring and full-length guide rod are used in the Alpha.

In an effort to streamline the Alpha, Arex did not include a decocker on this model. However, both USPSA and IPSC regulations require production guns possessing a double-action trigger to start with the hammer in the down position, so shooters will very carefully need to lower the hammer with the chamber loaded. There is a passive firing pin block that prevents the firing pin from contacting the primer unless the trigger is pulled.

We tested the Rex Alpha at 25 yds. for accuracy. All groups were fired single-action, five shots to a group and five groups per ammunition. Our single best group was fired with Federal’s 150-gr. Syntech Action Pistol load. Designed especially for USPSA competition, the ammunition is loaded to meet minimum power factor while still cycling the action reliably. The short single-action trigger travel and firm reset make this gun easy to shoot quickly. We found the handling characteristics and ergonomics of the Alpha to be excellent. Throughout our testing we experienced no failures—the gun cycled fine with everything we put in it. 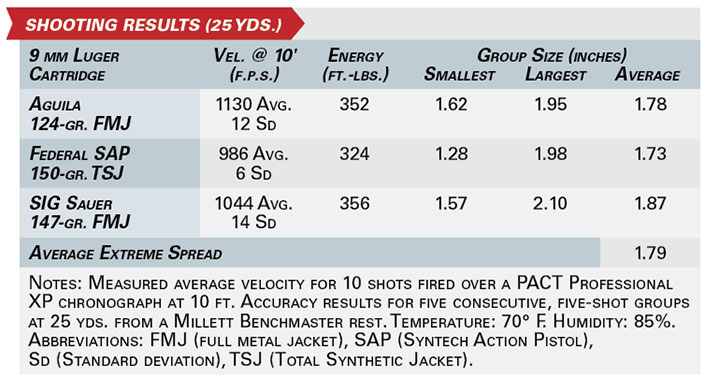 The Arex Rex Alpha impressed us as a gun with a robust design and construction that will stand up to the high round counts that competition requires. It possesses the accuracy and reliability needed to compete at the highest levels without additional gunsmithing or modifications; with an MSRP of $1,099, the Rex Alpha represents a tremendous value for the shooting-sport competitor. 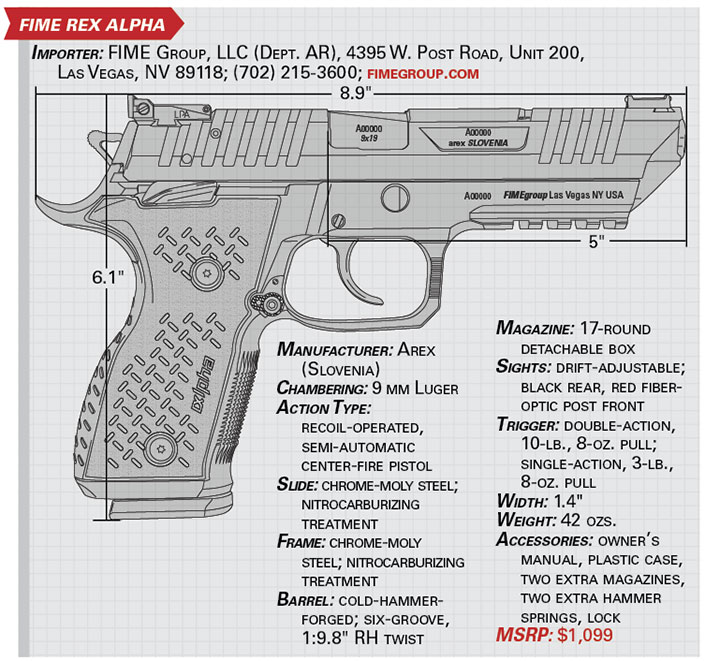 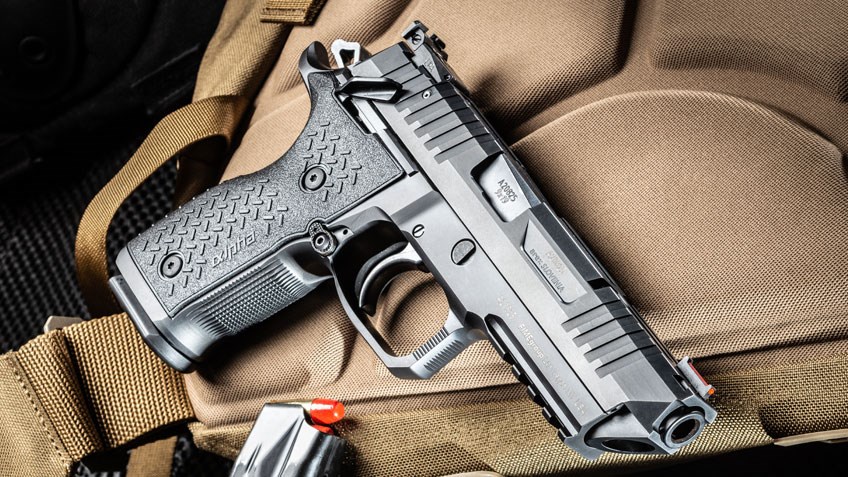