For the second time, the city of Flint, Michigan, is poised to reject the results of its contract bidding process after an experienced local firm provided the lowest offer.

“This is unethical, it is bid rigging, and I certainly won’t be a part of this,” city Councilwoman Eva Worthing said during a Tuesday meeting. “Does council and the city want to deal with a lawsuit over unfair bidding practices by this city? This is favoritism, cronyism … This is basically a sham, it’s unethical, and if council votes [to rescind this contract we signed], we’re in trouble.”

Residents may have to wait six months longer for repairs because WT Stevens — the company owned by the wife of a former NBA player and which Worthing suspects may have a corrupt relationship with Flint politicos — is still months behind schedule on finishing the last water contract the city gave it, the low-bidding company, Goyette Mechanical, said.

“The mayor wants us to take away Goyette’s bid and just give it to WT Stevens,” Worthing said during the meeting.

On Monday, Mayor Karen Weaver’s administration abruptly said it would rescind the $12 million contract from Goyette Mechanical, a local firm with 90 years of experience that specializes specifically in municipal water. On Tuesday, it asked the city council to approve the move, but uproar from multiple factions of the city council led to discussions being tabled until July 8.

The city of less than 100,000 has collected more than $647 million in state and federal aid for what is often described as a public health emergency. But when the money reaches City Hall, officials have repeatedly made decisions that have severely slowed the progress of fixing the water pipes, decisions that have had the side effect of sending more money to WT Stevens’ coffers.

A majority of the city council members joined against Mays and the mayor to vote against abruptly reversing the decision to strip Goyette of the contract.

“It is with sincere regret I am informing you Goyette Mechanical is not the lowest responsive bidder,” Flint’s purchasing manager Joyce McClane wrote in a July 1 letter to Goyette. “Therefore, pursuant to the City’s procurement process, the bid award must be rescinded.”

“On June 27, 2019, unbeknownst to the City, the State of Michigan discovered a discrepancy in the calculations with this product,” he continued. “The Department of Public Works mistakenly used different criteria to calculate your contract amount.”

Worthing said during Tuesday’s meeting: “You’re saying oh, oops, they’re no longer the lowest bidder, our mistake … and ‘guess who we have right here everyone, for council to give the [$12 million] restoration now to WT Stevens … this is not how contract bidding is done.”

“With all of the controversies surrounding WT Stevens, the poor work they’ve done, they are not even qualified for pipe replacements in the first place,” she continued. “So, basically Goyette is going to sue and I wouldn’t blame them.”

Joe Parks of Goyette Mechanical said in an open letter to the city “the proposed award for Phase 6 Restorations to WT Stevens smacks of favoritism and unethical contracting” and pointed out that the “‘mistake’ … is entirely the city’s fault.”

“The likelihood of WT Stevens completing both the Replacements and the Restorations by year-end is Zero,” Parks wrote. “In fact, they will most likely not be able to complete all of the work in 2 years. Goyette GUARANTEES that they will be complete the 15,000 addresses by 12-31-19 as long as the work gets awarded in July ’19.”

After a question from the state, the city took the bids and decided that the necessary work was different than what it originally asked for. It discarded line-items that it said it would no longer use and recalculated the bids using the new quantities and types of work.

A state official said that nothing in the state’s request required it to do so, the Flint Journal reported.

WT Stevens was initially ineligible to do any work for the city’s water lines because it allegedly had no relevant experience, as required under the bid specs. Mays arranged to get around that requirement by attaching a Detroit-based engineer with water-main skills, Ellis Monk, as a subcontractor, Monk told the DCNF. Monk said the workaround did little to actually help Flint residents.

WT Stevens “hired people [with] no experience, some of them seemed like they were fresh out of jail,” he said. “They’re drilling every which way, junk flying everywhere.”

Then, in 2017, phase four of work was bid out, and Goyette was the lowest bidder for all 10 zones. But the city council threw out the winning bid and started over. Councilwoman Kate Fields said the rationale was vague and that “my opinion is that this … has been corrupted once again.”

It turned out that Goyette’s mistake was offering not only the lowest bid per linear foot of pipe as requested, but also as a bonus, giving the option to perform the work at a flat, per-home rate.

Goyette and WT Stevens wound up splitting the work. But Goyette was finishing much faster, poising it to gobble up most of the addresses and therefore more money than WT Stevens. So Weaver’s chief advisor, Aonie Gilchrest, leveled the playing field by barring Goyette from using specialized digging equipment known as “hydrovac,” minutes show. The action dramatically slowed the pace of restoring clean water to Flint residents while driving up the cost, observers told the DCNF.

According to October 2018 minutes, Gilcreast ordered that engineering supervisor AECOM “should not wait until WT Stevens was finished with the replacements that they have been issued before giving them more addresses. He stated that AECOM would have trouble out of him if they didn’t issue WT Stevens more addresses.”

In May 2018, AECOM said “The issue is that there is more copper-to-copper [i.e. safe pipes, as opposed to lead] than we originally thought there would be … which is bad for the [service line replacement] contractors but good for the residents of Flint.” Mayor Weaver ordered the contractors to dig up every yard instead of just those that had lead pipes, according to a map with 94 percent accuracy.

The result was spending vast quantities of taxpayer money tearing up streets and yards that did not need to be torn up, while those who actually had the toxic heavy metal in their pipes waited far longer for repairs. On June 27, the Flint Journal reported that in 2018, contractors dug up 10,531 yards when only 1,567 had lead pipes.

Council members, engineers and activists said this was as good for WT Stevens as it was bad for residents, since WT Stevens did not have the skills to actually replace lead pipes, but could use backhoes to dig simple holes and look for them.

Only a court order signed by a judge on March 26 forced Flint to start using the maps that told it where the dangerous pipes were. Since then, 238 of the 337 yards it dug up actually had pipes that needed to be replaced.

When the Daily Caller News Foundation previously called to ask city hall spokeswoman Candice Mushatt about WT Stevens, a second person secretly listened into the call, eventually unleashed an outburst, and said his name was “Jesse Jesse” and “I don’t have a job title.”

Mushatt did not respond to a request for comment for this story.

At the city council meeting Tuesday, Woodson said Goyette should have been “afforded the same opportunity as the people who bid again … It was all a farce, man.”

“The [state official] didn’t ever say you have to redo the bid … he just asked for the criteria,” he continued. “He didn’t tell you all to redo the bid and get a different person as the lowest bidder. They went in and changed it themselves and then rebid it. This is the second time.”

Mays advocated for approving the mayor’s request, but the other council members weren’t so sure. He jumped out of his seat, arms outstretched, and repeatedly cut off others. “Remove yourself, you causing chaos,” Mays said to committee chair Monica Galloway. 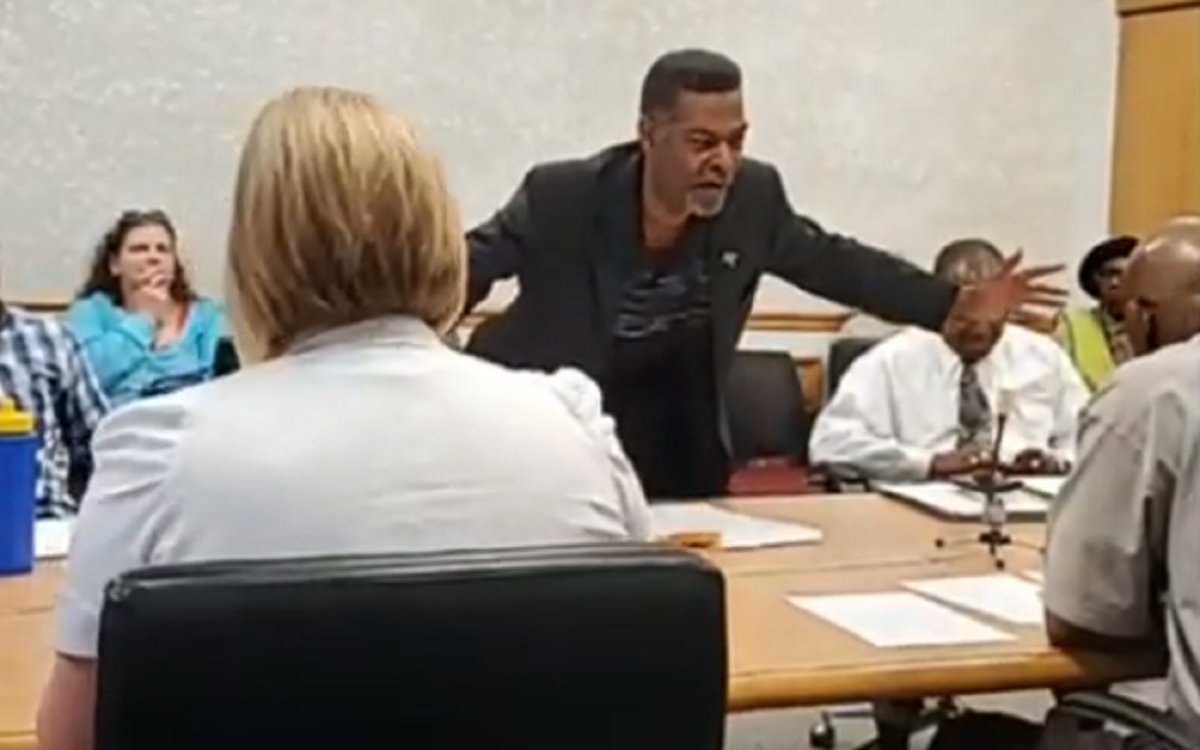 In November 2017, Mays was sentenced to a week of community service for pawning his city-issued laptop nine times. As part of the plea deal, his sentencing was delayed until after the election, which he won with nearly 70% of the vote.

In June 2016, Weaver pushed the city council to approve a deal with Rizzo Trash that raised eyebrows on the rest of the city council, while Mays vociferously pushed it. Rizzo’s executive later pleaded guilty to conspiracy to bribe.

The contract move came as Weaver was in Hawaii for a conference. Taxpayers paid for her stay even though the city has laid off firefighters and there is an hour-long wait for police emergency response.

In March, the city council gave Weaver a $37,000 raise to seven times the city’s average income.