On Sunday morning, police in Utica, New York arrived onto a scene to investigate an alleged homicide. There, they found a man outside an SUV saying he had killed his girlfriend and threatening to kill himself, according to local news reports.  The offender was confirmed by police to be Brandon Andrew Clark.

The pictures were posted by Clark on 4chan, Instagram and in several private group chats on Discord. The graphic images are currently spreading all over the internet on platforms such as Twitter. (RELATED: Will Tennessee Lead The Nation In Criminal Justice Reform?)

Clark later posted to his Snapchat a picture of what appears to be a self-inflicted laceration to his neck with the caption, “Ashes to Ashes.” Police have confirmed to local Utica news outlets that the suspect did try to commit suicide and is in critical condition at St. Elizabeth Hospital.

Lt. Bryan Coromato confirmed Monday morning that the department believes the alleged suspect posted the gory images to social media after killing the young teen. Coromato added that the department hopes to release more information after meeting with the victim’s family.

Devins’ alleged sister also posted to her Instgram story that a candlelight vigil will be held Tuesday at 8pm in Parkway Park stating, “Everyone welcomed, please bring candles.” It has not been confirmed that Liz Devins is the alleged victim’s sister, but Bianca’s Instagram account does follow Liz Devins and past pictures available online do show the two together.

The graphic imagery was originally posted by Andrew Clark’s Instagram(@YesJuliet): 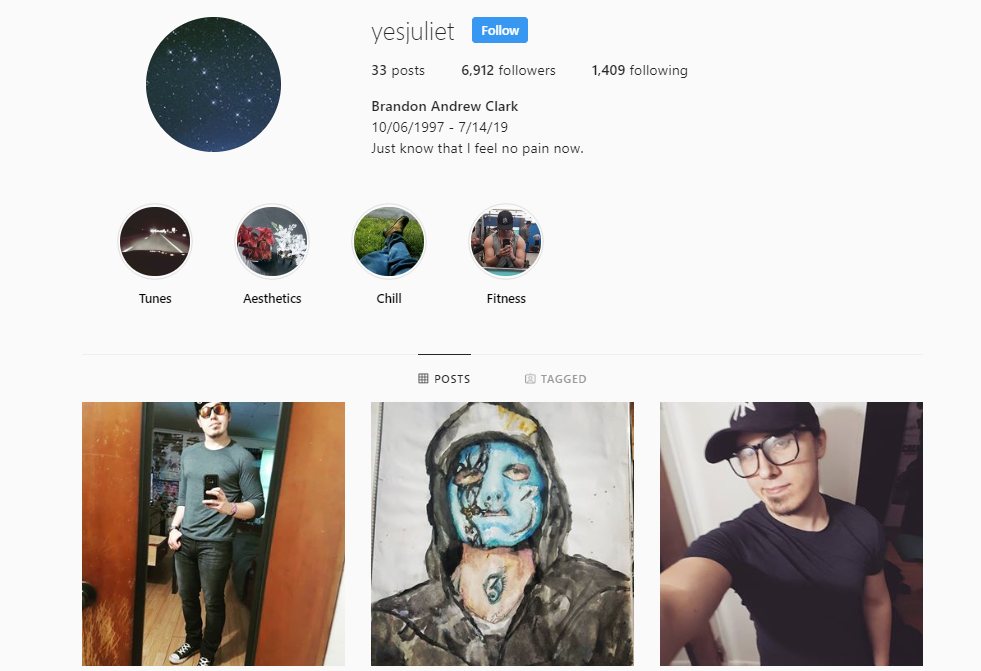 Before uploading a picture of Devin’s deceased body, Clark posted to his Instagram a photo of him driving on the road with the caption, “Here comes Hell. It’s redemption, right?” 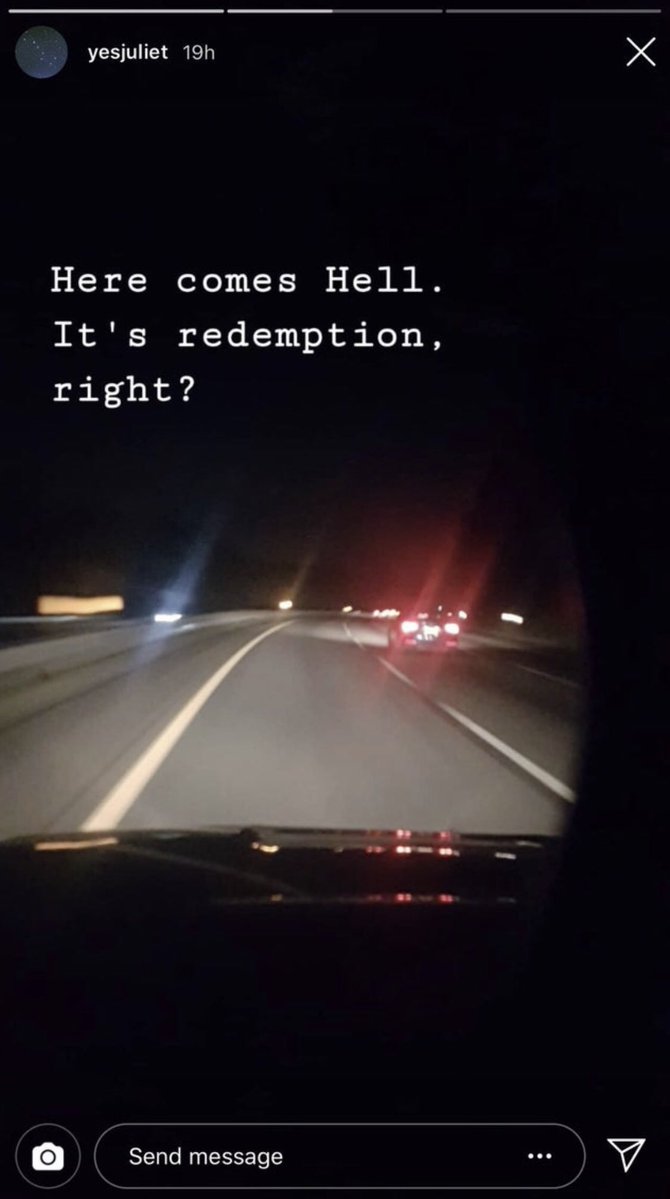 Human Events Managing Editor Ian Miles Cheong wrote a detailed thread last night detailing how Devins came to meet Clark and warned of the dangers women face online.
A 17-year-old girl was murdered by an orbiter who knew her on Discord

“While we can’t comment on the ongoing case, we removed an image from the @yesjuliet account for violating our policies, ” said an official from Instagram to the Daily Caller. “We have taken steps to prevent others from re-uploading this image to Instagram. To clarify, only one image was uploaded to the @yesjuliet’s Instagram Stories.”

Clark’s account, @YesJuliet, was not removed by Instagram for over 24 hours after he posted the graphic images of the dead teen. Since then, an official from Instagram confirmed to the Caller that the account has been removed.

A petition has been started on Change.Org requesting that Brandon Clark face the death penalty. “@Escty was murdered by an insane Ex boyfriend who then tried to kill himself but was unsuccessful,” reads the petition. “She was murdered in cold blood by an insane man who couldn’t deal with his own problems so he had to kill another human being and expected to get away with it. He proceeded to post her dead body on his Instagram story (@yesjuliet) with the caption ‘I’m sorry Bianca.'”

Currently the petition has over 300 signatures.

The hashtag #ripBianca is trending in the United States with individuals posting tributes to the alleged victim, Bianca Devins.

Christina Grimmie was murdered by an obsessed fan three years ago. Another one broke into Meg Turney/Gavin Free’s home with a shotgun last year. Now, tragically, #ripbianca.

Thousands of women die to rejection violence every year. This is a real issue, and we cannot ignore it.

Today at 4:40 PM Utica Police released a statement confirming the identities of the victim as 17-year-old Bianca Devins, and the offender as 21-year-old Brandon Clark.

“On Saturday July 13th, 2019 the two had planned to go to a concert together in New York City. Information that we have received is that they in fact did go to the concert, arriving around 7:30 P.M.,” said the Utica Police. “They left the venue and proceeded back to Utica sometime after 10:00 P.M. It is believed that some sort of argument ensued at the venue that precipitated the following engagement between the two.”

“Sometime during the early morning hours of Sunday July 14, 2019 the two arrived back in Utica and proceeded to the Poe St location. The investigation revealed that the argument progressed until the male produced a large, black handled knife, and used this to inflict the injuries that caused her death.”

Additionally, police confirmed that the pictures posted on Discord where in fact authentic, and were uploaded by the offender, Brandon Clark. 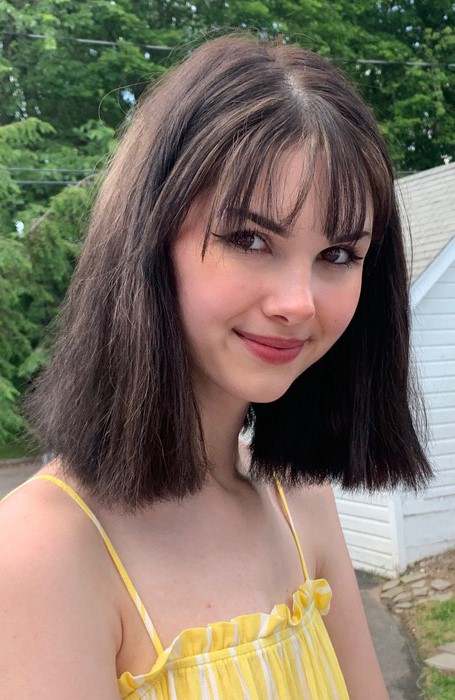 The family of Bianca Devins released a full statement with the assistance of Utica PD:

“We are very grateful for the outpouring of love and sympathy we have received from our Friends, Family, Bianca’s Friends and the whole community. Your prayers help to strengthen us through this difficult time.

Bianca, age 17, was a talented artist, a loving sister, daughter, and cousin, and a wonderful young girl, taken from us all too soon. She is now looking down on us, as she joins her cat, Belle, in heaven. Bianca’s smile brightened our lives. She will always be remembered as our Princess.

Bianca graduated from T. R. Proctor High School this past June and was looking forward to attending MVCC in the fall.”