The New York Times published an article Saturday profiling a relationship that began between a 16-year-old girl and an older married man. The media outlet deleted a tweet, sent out Wednesday morning, that said there was an “instant connection” between the two when the girl, Abby Mouzakitis, was a teenager.

The article provides substantial information about the couple’s relationship during the time Mouzakitis was in her teens. It says their relationship at the time consisted of deep glances, flirting, hand-holding, and kisses on the forehead. 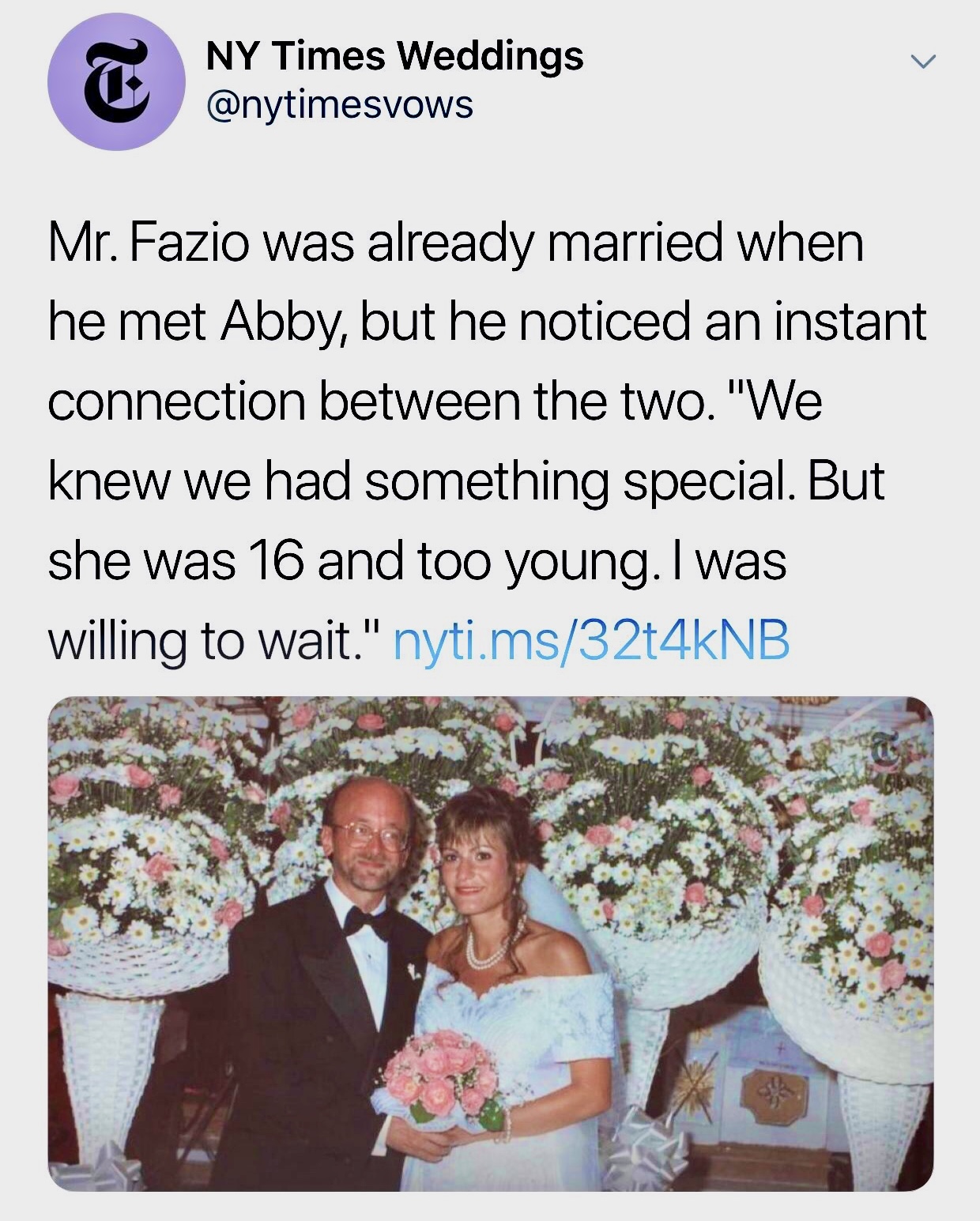 The New York Times deleted this tweet, which said there was “an instant connection” between a 16-year-old girl and an older married man. (Screenshot/Twitter/New York Times Weddings)

“We’ve deleted an earlier tweet to this story that was poorly framed,” the more recent tweet reads. The Times continues to link to the article in its latest tweet.

We’ve deleted an earlier tweet to this story that was poorly framed https://t.co/SI9r9neivw

The article, titled “On the Second Try, Both Found a Partner in Business and for Life,” discusses the relationship between Abby Mouzakitis, now 59, and John Fazio, now 70, who have now been married for 28 years.

The two met when Mouzakitis was working as a cashier at the pharmacy in New York City where Fazio was a “partner.” The article spends six paragraphs on the relationship between the two during the time that Mouzakitis was a teenager.

“I was already married when I met Abby. We were very drawn to each other. We knew we had something special. But she was 16 and too young. I was willing to wait,” Fazio told the New York Times.

Speaking specifically on his thoughts on Abby when she was 16, Fazio said, “Abby was different than most of the girls — kinder, softer, not defensive, nice to look at and talk to. I loved watching her. I loved the way she talked and spoke. I still do.”

Mouzakitis, who says she was raised in a “sheltered Greek household” around the corner from the pharmacy where Fazio was a partner, told the Times she liked Fazio during the time she was employed as a cashier.

“I was 16 and very shy, John was 11 years older than me. I liked him. I didn’t think he liked me back,” she told the Times. “We would write little notes to each other, he would kiss me on my forehead. A slow love was happening without either of us knowing it.”

Alix Strauss, the author of the article, described the relationship between the two when Mouzakitis was a teenager: “Over the next two years, there were deep glances and flirting. The two would have breakfast or coffee together, they would hold hands, and he would walk her home.”

Mouzakitis married another man and had a child, as she “knew she had to find someone else.” A few years later, she and her husband divorced and Mouzakitis returned to the same pharmacy to work as a technician. Fazio separated from his wife about five years after Mouzakitis returned to the pharmacy. Fazio and Mouzakitis moved in together soon after he separated from his wife and Fazio proposed to her in their kitchen the following year. (RELATED: ‘Misleading’: The New York Times Omitted Key Details About EPA’s Shutdown Woes)

“From the first moment I met him, I knew we were meant to end up like this,” Fazio told the Times.

The two are now pharmacists and owners of the same pharmacy where they met.