WHO Official Defends China, Says Everyone Is ‘Over-Focused’ On Regime’s Coronavirus Numbers

KING OF PRUSSIA, PA — President Donald Trump’s reelection campaign is making its case to female voters ahead of the 2020 election, launching the new “Women for Trump” coalition on Wednesday in a key swing state.

The event was held at the Valley Forge Casino and Resort, the only bit of flash for miles in rural southeastern Pennsylvania, one of the solid rust belt states that Trump was able to win by less than one percentage point against Hillary Clinton.

Women filtered into the resort up to two hours before start time, eventually filling the nearly 700 seats set up for the event. The stage featured crisp, modern white chairs, a pink and red faux flower background, and “Women for Trump” signs, resembling something closer to a Vogue Magazine fashion panel than a political rally. 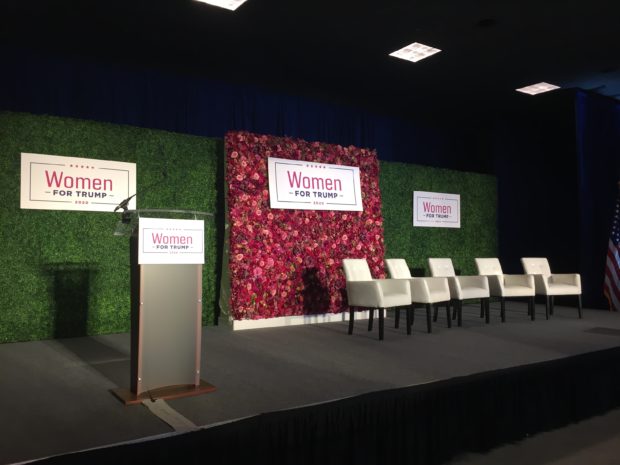 Campaign manager Brad Parscale was the lone man to appear on stage during the event, prompting a joke about the Fox News show “Outnumbered” from McEnany.

Before anyone took the stage, however, the crowd was lead through a prayer warning of a “demonic enemy,” the Pledge of Allegiance, and the national anthem. The pro-America opening underscored a larger message from the event, which was that Democrats hate America and want to turn it into a socialist dystopia. Some of the speakers referenced the president’s spat with freshman Democratic congresswomen, which led to House Democrats condemning the president’s tweets as “racist,” by turning the focus on the actions of Reps. Omar and Ocasio-Cortez. (RELATED: House Passes Resolution Condemning Trump For ‘Go Back’ Tweets)

“America will never be a socialist country,” Guilfoyle told the crowd of women, prompting some of the largest applause of the day and a “USA” chant, while Schlapp called the Democratic members “anti-American.” 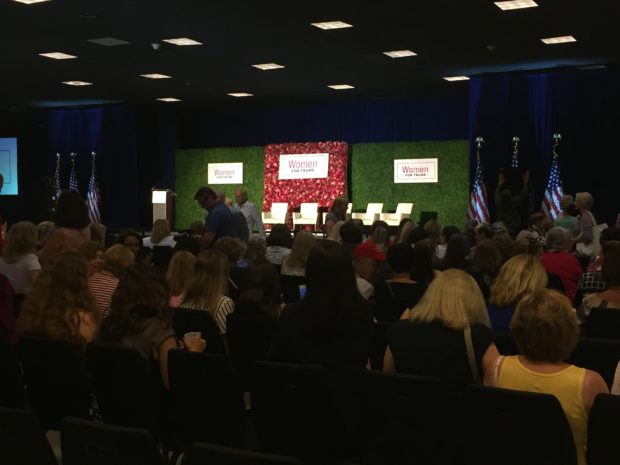 Crowd waits for the event to start at the “Women for Trump” coalition launch in King of Prussia, PA (Daily Caller: July 16, 2019)

Guilfoyle later told the Daily Caller during an interview that Trump’s tweets stemmed from frustration with people who don’t seem proud to be Americans.

“I come from a Hispanic background of hard-working parents who came to this country and were able to be blessed with the American dream. You would think that Omar would actually be supportive and receptive to that,” Guilfoyle explained. “I understand what the president is getting at. He’s actually frustrated that people are putting down this country. They are making anti-Semitic remarks and none of that is appropriate. How about we celebrate the fact that we have a diverse and incredible country?”

McEnany similarly told the Caller the following about the president’s tweets:

“What [the president] was saying is this: if you don’t love this country, if you want to sit there and say anti-American things and anti-Semitic things and complain about the greatest country on Earth, by all means take your exit — why are you staying here if you so despise this country? It’s a common sense principle and I think there are millions and millions of women across this country who agree.”

The biggest issue of the day for both the attendees and the speakers, however, was the economy. Speaking to a crowd in a part of the country still controlled by unions, the women on stage hammered the fact that unemployment is down and manufacturing jobs and wages are up under Trump.

“We’re going to be all over country making sure voters hear about the things that the President has done to make their lives better,” RNC chairwoman Ronna McDaniel told the Caller when asked about campaign strategies. “Wages are up, jobs are coming back, people’s pensions and 401K’s are stronger. So many things are better in this country, and we have to get that message out because we know, frankly, it’s not going to get done unless we do it.”

Lara Trump, Guilfoyle, and McEnany all cited the growing economy as just one reason why women are donating to the Trump campaign at a higher ratio than they did in the previous cycle. According to data from the Center for Responsive Politics, nearly half of Trump’s donors in the first quarter of 2019 were women. Just about a quarter of his donors were women in 2016.

“I think many of those who didn’t vote for him in 2016 have seen what he’s been able to do as president. That he’s a very measured president. That he’s fighting every day for this country. That he goes on these overseas trips and is so well received. Not to mention at home, domestically, all the things he’s been able to change — the spike in our economy, the low unemployment, the jobs coming back, the way he is trying to level the playing field with other countries when it comes to trade. Really, I think people as a whole understand that he is fighting for this country. So, I think the women who maybe were on the fence and unsure about him in 2016 now have results.”

“There’s just been a tremendous economic surge in the country with women being able to be gainfully employed,” Guilfoyle declared. “Women respond to that — they are the ones running households, making economic decisions, they see the numbers and how the president has really made this country prosper.”

McEnany noted that the female unemployment rate has consistently remained below 4% with over half of new jobs created under the president going to women, asserting, “Women are smart, they’re intuitive, they see past the echo chamber and they see a president that is working for them.” 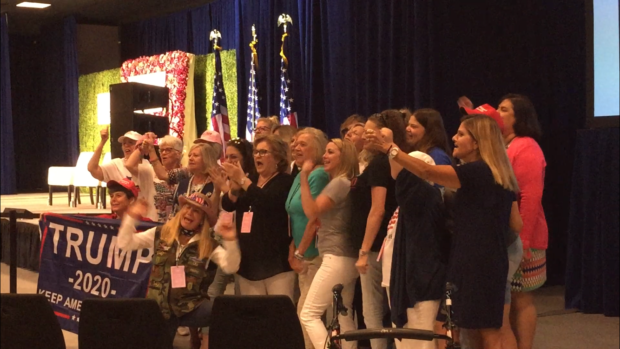 The media was another target of the event, with the speakers denouncing reports that Trump struggles with suburban women voters and knocking polls showing the president losing to some of his Democratic challengers in battleground states. Attendees and campaign officials both talked about the “silent Trump supporter,” or someone who secretly supports the president but doesn’t advocate for him publicly for fear of backlash. McEnany, for example, shared the story of a CNN makeup artist who whispered to her during the 2016 election that she loves Trump.

“That is emblematic of what is happening across the country,” she said, explaining why national polls might not be reflective of the president’s actual support. “You know, the suburban women might hang up on a pollster, but when they are in the quiet of that election booth, and they have their ballot, and there’s no one around, they will sit there and think, ‘Who is the best for my children … who is best for my husband or myself getting a raise in my paycheck?'”

Lara Trump pointed to the Women for Trump coalition as a potential avenue for normally quiet Trump supporters to find a place where they feel comfortable and accepted.

“I think it’s about weaponizing our women around the country and saying, ‘get out there and talk to your friends,’ you know, when you go to church, when you go to your kids playgroup or whatever it might be .. and telling them it’s okay,” Trump said to the Caller. “And so the women that we saw today and all across the country will have events like this to get women inspired to talk to their neighbors, talk to their friends, talk to their co-workers and encourage people to more outwardly support the president.”

The women present on Wednesday would indeed be a good group for the job. The crowd was revved up, cheering and clapping consistently for lines about the economy, immigration, North Korea, and health care, jokes about Democratic infighting, and anti-socialist messaging. The “Women for Trump” launch had all the makings of a Trump rally, minus the president.

1
Navy Fires Aircraft Carrier Commander Who Begged For Help Over Coronavirus Cases
US
2
Chinese Markets Reopen — And They Still Sell Bats, Dogs And Cats
World
3
Candace Owens Considering A Run For Congress
Politics
4
Biden Ignores China's Undercounting, Says America Has 'More Coronavirus Cases Than Anywhere In The World'
Politics
5
Legendary Football Coach Apologizes For Tweets. Should He Have Stood His Ground?
None