Kathy Zhu, a 20-year-old University of Michigan student, has been vocal about her support of Trump for years, garnering thousands of followers on Instagram and Twitter under the username “Political Kathy.” She had more than 74,000 Twitter followers and 12,800 Instagram followers as of press time.

She was named Miss Michigan on Sunday, Zhu told the Daily Caller News Foundation, by the beauty pageant organization Miss World America. But Zhu’s reign ended Thursday when she said she received an email from Laurie DeJack, Miss World America’s state director for Indiana and Michigan.

Zhu shared a text conversation she said she had with DeJack, which cites a tweet from Zhu’s account in 2017 about death rates in black communities.

Did you know the majority of black deaths are caused by other blacks? Fix problems within your own community first before blaming others https://t.co/9r3KArvQkQ

Miss World America selects U.S. candidates statewide, then on a national level, and then sends them to the Miss World contest, Zhu said. She said the organization vetted her for Miss Michigan over email, requiring candidates to submit an email application and submit a video.

Zhu said she was asked to refrain from posting on social media until after the Miss Indiana and Michigan World America account posted and announced the winners. The organization posted a photo to Facebook on Wednesday, announcing Zhu as a national finalist. 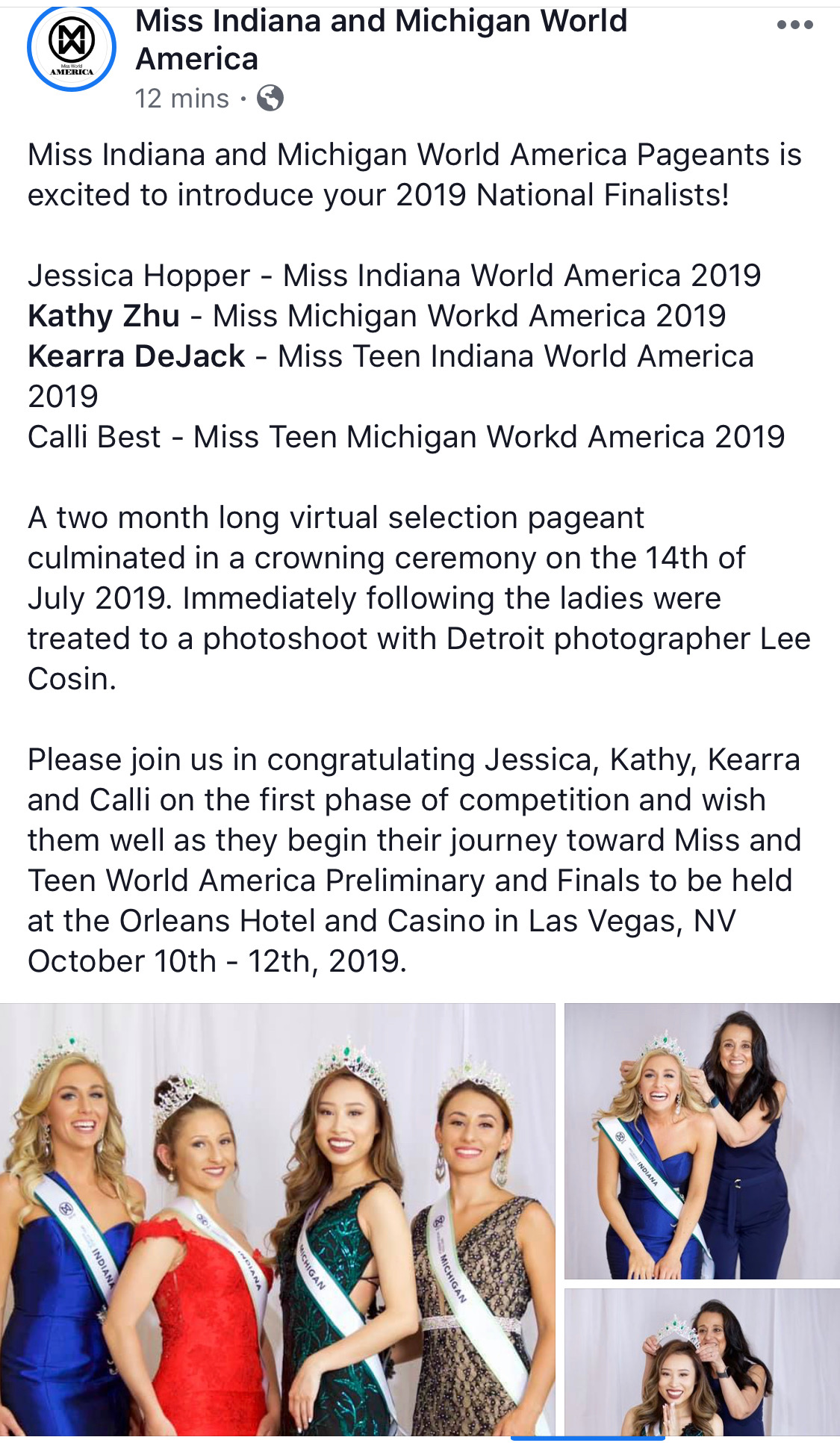 An email Zhu shared stated she must remove all photos of herself as Miss Michigan and stop affiliating herself with the title, saying her social media accounts “contain offensive, insensitive and inappropriate content, and in violation of MWA’s Rules and Conditions.”

DeJack specifically referred to a contestant requirement that Zhu be “of good character” and have a background that “is not likely to bring into disrepute Miss World America or any person associated with the organisation,” according to a screenshot Zhu shared.

“Therefore, and effective immediately, MWA does not recognise you as a participant of any sort or in any capacity as it relates to any and all events of MWA,” the email stated.

DeJack did not immediately respond to a request for comment from the DCNF.

“Statistics and facts are not always pleasant. It’s disgusting how you would rather lie to the public’s face than be supportive of someone that is trying to make a difference by talking about subjects that no one dares to say,” Zhu responded in an email to DeJack.

Zhu told the DCNF she decided to post about the matter on social media because “this is not about a beauty pageant or crowning — it’s about people being prejudiced about a political ideology rather than their conscience or character.”

“Miss World America’s State/National/Chief Director accused me of being racist, Islamaphobic, and insensitive. They stripped me of my Miss Michigan title due to my refusal to try on a hijab in 2018, my tweet about black on black gun violence, and “insensitive” statistical tweets,” Zhu wrote on Twitter.

Miss World America’s State/National/Chief Director accused me of being racist, Islamaphobic, and insensitive.

They stripped me of my Miss Michigan title due to my refusal to try on a hijab in 2018, my tweet about black on black gun violence, and “insensitive” statistical tweets. pic.twitter.com/K1Btho0Pgq

These are the text message exchanges between the state director and me. pic.twitter.com/HtHS1gns6X

Zhu previously was enrolled at the University of Central Florida where she attended a Hijab Day event in 2018.  Zhu said she declined to try on a hijab and posted on Twitter about the incident, a move that caused critics to demand she be expelled. She has since deleted her tweet, she told the DCNF, and transferred to the University of Michigan later in 2018.

Zhu referred to the incident in her email response to DeJack, alleging a woman tried to make her wear a hijab without Zhu’s permission.

“What’s ‘insensitive’ is that women in the Middle East are getting stoned to death for refusing to obey their husband’s orders to wear hijabs,” Zhu added. “Are the people in MWA implying that they advocate for the punishment of women who refuse to wear a hijab?”

“I’m honestly overwhelmed,” Zhu told the DCNF. “I woke up this morning and saw this blew up … I’m really glad to be able to have such a strong support base like that.”

She spoke about the pressures that come with representing the organization as well.

“You have to be cookie-cutter. You have to say all the right things even if you don’t believe them for publicity. I think that’s wrong. I think that if they wanted someone with an opinion other than world peace — that would be great.”

Miss World America did not respond to a request for comment from the DCNF.

1
Senior Intel Officials Erupt Over Adam Schiff's Letter To Director Richard Grenell, Pressing Him Over ODNI Personnel Changes
Politics
2
WATCH: ABC’s Jon Karl Salutes Fauci — Fauci Fires Back With Finger Guns
Politics
3
Here's How This Pro-Beijing Outlet Made It Into The White House Coronavirus Press Briefing
US
4
The Coronavirus Pandemic Is Not Stopping Border Wall Construction
US
5
'Give Me The Price': Trump Ignores Journalist For Not Knowing Oil Costs
US