Above Image: The Saint Victor .308 is topped with a Burris Close Quarter Tactical kit including an RT-8 1-8X 24 mm riflescope and a Fastfire 3 red dot in a P.E.P.R. quick-detach mount. Also shown are a Magpul Bipod with M-Lok attachment and the Magpul PMAG D-50 LR/SR Gen M3 50-round-capacity magazine.

Attempts to turn the clock back to the 7.62×51 mm NATO (.308 Win.) inevitably remind me of the retired general who once told me that if he could just rid the Armed Forces of the ‘Mattel’ rifle, there were 17 different places one could knock out a Soviet T-72 tank with an M14!” So wrote my former boss and friend Technical Editor Bob Hunnicutt in a review of the Knight’s Armament Co. SR-25, entitled “One-Hole Autoloader” (September 1993, p. 46).

The general’s comment, of course, was really an indictment of the 5.56×45 mm NATO cartridge. And though it came nearly two decades into the production of the original semi-automatic M14 clone, Springfield Armory’s M1A, it would now, ironically, apply as well to the company’s newest AR-based rifle: the Saint Victor .308.

M1A Not Going Away

A .308 AR from Springfield? Wait, isn’t this the company founded on the old-school M1A? In Senior Executive Editor Brian Sheetz’s office is a sticker with an M14 silhouette that reads “In 1969 … This is the only ‘Woodstock’ I Remember.” I am also a card-carrying member of the cult of the M1A. It was the first .308 Win. rifle I ever owned—and the second and third. When it comes to the M1A, I believe.

Today, Springfield makes and sells as many M1As as it is able in myriad configurations. But what if you are not a member of the M1A club? Well, that’s OK, because Springfield now makes a version of its wildly popular AR platform rifle in the same perennial favorite chambering. That gun is the Saint Victor .308—a .308 Win.-chambered version of its AR with upgraded features that, as a package, add up to a real value (see Executive Editor Joe Kurtenbach’s sidebar below). With its Saints, Springfield has found success where others have stumbled; and with the Victor .308, the designers have trimmed out extraneous weight. Sure, there are lighter AR-10-size rifles, but not at this price and with these features.

The Victor .308 is a direct-impingement, gas-operated semi-automatic with a pinned, low-profile gas block underneath a free-floating 15″-long aluminum handguard. The latter has seven sets of eight slots to accept M-Lok-compatible accessories along its entire length. Attachment to the barrel nut is via two screws on either side—no delta ring here. It measures 1.72″ across the flats and does not have a full-length rail at its top. It is the svelte profile of the handguard that takes much of the weight out and makes the Victor handier than many of its competitors. The gas system is adjustable via a set of supplied changeable screws with different apertures that regulate gas flow.

Both the upper and lower receiver are forged 7075-T6 aluminum that are hard-coat-anodized. The lower, which measures 9¼” long from its front to backplate, uses the Accu-Tite tensioning system that takes the slop out of the junction of the upper and lower receivers by means of a nylon-tipped set screw. The .308’s lower receiver is the same as the .223 Rem. Saint’s in width right up to the magazine well. Here it goes from 0.90″ wide to 1.42″ to accept the wider and longer .308 magazine. The bump out starts behind the bolt release on the left and aft of the magazine release on the right. 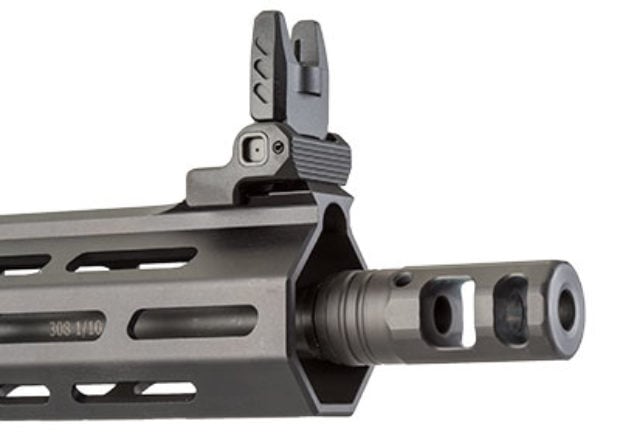 Key to the Saint Victor .308’s weight savings is the svelte fore-end. The muzzle is topped by an effective brake of Springfield’s own design.
–

The barrel, made in-house, is of chrome-moly-vanadium steel with a lightweight profile that has a Melonite finish both inside and outside. The rifling is six-groove with a 1:10″ right-hand twist.

The beefed-up bolt carrier group contains a seven-lug bolt of 9130 steel, with each lug measuring 0.174″. Extraction is via a conventional AR extractor, just beefed up, while ejection is powered by a plunger inside the bolt face. The carrier’s rear is untapered without additional rings or lugs and measures 0.930″ in diameter. It is backed up by a carbine “H” or heavy tungsten buffer.

The single-stage trigger is Springfield’s own, made in-house with polished micro surfaces, and it is nickel-boron-coated with a flat blade. The sample rifle’s broke at a consistent 5 lbs., 9 ozs., with no discernible take-up and just a little overtravel. I’ve installed aftermarket AR triggers that were not this good.

The magazine release is on the right in front of the trigger, while the bolt catch is on the left. The safety is a 90-degree unit with the lever on the left, but there is an index tab on the pin’s right face indicating its position.

Polymer furniture, as with the rest of the Victors, is from Bravo Company. The buttstock—thankfully with a rubber buttpad—is collapsible with six positions, while the pistol grip is Bravo’s hand-filling Mod.3 with stippling on its sides and grooves on its front.

The Victor .308 comes with a very usable set of spring-loaded back-up iron sights with a windage-adjustable, dual-aperture rear and an elevation-adjustable front post. The rear attaches to the integral Picatinny rail on the receiver’s top—plus two slots in the handguard—while the front mates to an integral 1.21″-long rail section.

The gun comes standard with a muzzle brake designed and manufactured in-house at Springfield with two sets of side vents, one measuring 0.496″ long and the other 0.280″, with two smaller ports at 2 and 10 o’clock measuring 0.143″. It is quite effective in helping keep the sights on target despite the greater energy of the .308 Win. cartridge. That said, on NRA’s indoor test range the vented gas and increased concussive thump on the sidewalls were noticeable. Outside, it was not an issue. 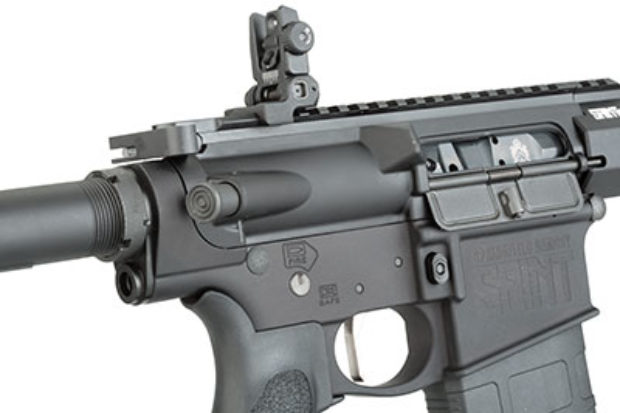 You can’t have a good gun without a good magazine. For years, the AR-10 platform was a goat rodeo of magazines. Do you use the original Gene Stoner Costa Mesa AR-10 waffle-sided 20-rounder? Or how about a modified FAL magazine? The DPMS magazine? ArmaLite? Or maybe a steel SR-25 magazine? Magpul settled the AR-10 magazine conundrum once and for all when it introduced its PMAG for the U.S. M110 Semi-Automatic Sniper System. As one would expect from Magpul, it is an outstanding magazine, offered in 10-, 20- or 25-round capacities. And there is even the PMAG D-50 LR/SR Gen M3 drum holding 50 rounds. The Victor .308 comes with one 20-round Magpul Gen M3, but I tried them all, including the drum, and they ran without a hitch. As with quite a few other AR-10-style rifles I have evaluated—some far more expensive—surface wear developed on the charging handle and its track on the upper, but didn’t impair function.

The Victor .308 is intended as a defensive carbine, while other, longer-barreled versions with thicker-contour barrels will certainly be forthcoming, this first gun is intended for shorter-range work. That SR-25 story by Bob Hunnicutt was written on the cusp of the AR’s ascendancy as America’s rifle; it is the most popular rifle platform for host of reasons. But the M14-loving general had a point. All things being equal, the .308 Win. is superior to the .223 Rem. in terms of energy on target. 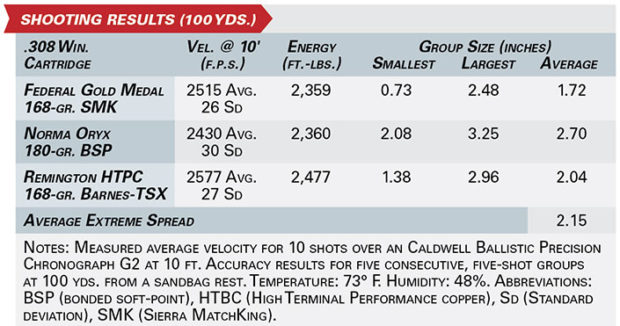 A defensive rifle must be reliable. In addition to the accuracy testing, the Victor was tested for reliability with bullet weights from 110 to 175 grs. from Black Hills, Federal, Hornady, Nosler, PMC, Remington, SIG and Winchester. Partial boxes I had accumulated from numerous other tests, often mixed in the same magazine—400 rounds in all—ran without a hitch in the gun despite their being a jumbled smorgasbord of headstamps and bullet weights.

The cost for additional downrange energy has been increased recoil and gun weight. I am extremely unlikely to have to take my rifle into a fight with a T-72, but coming in at 7 lbs., 12 ozs., sans magazine, the Saint Victor .308 doesn’t add much weight compared to the first 6-lb., 11-oz. .223 Saint we evaluated (January 2017, p. 48). For less than a pound of extra weight, with increased recoil much diminished by an effective brake, I’ll take that deal. Just don’t tell my M1As.