Over the past few weeks, many on the left have impugned President Donald Trump and his supporters as racist and bigoted, after Trump told a group of far-left congresswomen to “go back” to their home countries.

However, that label of bigotry has not been solely applied to Trump and his supporters. The racism charge has been leveled at moderate and liberal figures in recent years, including House Speaker Nancy Pelosi, Chief Justice John Roberts, former Vice President Joe Biden, and columnist George Will. Private citizens and pageant contestants have also faced the accusation if they have publicly expressed their political views, or just been in the wrong place at the wrong time. Check out our full list below.

Nancy Pelosi: The speaker was accused by Democratic New York Rep. Alexandria Ocasio-Cortez of being “disrespectful” towards “newly elected women of color” in Congress, presumably referring to herself and other members of “the squad,” including fellow freshman Reps. Ilhan Omar of Minnesota, Rashida Tlaib of Michigan, and Ayanna Pressley of Massachusetts. (RELATED: Will Nancy Pelosi Budge On Impeachment?)

Joe Biden: The former vice president was accused of racial insensitivity by fellow presidential candidate and California Sen. Kamala Harris during the first Democratic debate last month. Biden came under fire from the left for his 1970’s opposition to forced school busing, something opposed by 86% of the American public at the time. (RELATED: Kamala Harris Backtracks On Busing After Hammering Biden On The Issue)

Blue Dog Democrats: Ocasio-Cortez’s chief of staff Saikat Chakrabarti implied that moderate Democrats in the House of Representatives were racist for demanding a vote on a bipartisan border bill that previously passed the Senate 84-8. Chakrabarti compared the group of moderate Democrats commonly known as “Blue Dogs” to the segregationist southern Democrats of the 20th century. The bill in question allocated $4.5 billion to deal with the border crisis, and ultimately passed the House and was signed by Trump after Pelosi relented to the moderates’ demands.

Mitt Romney: During the 2012 presidential election, the Republican Presidential nominee was blitzed with headlines such as “Mitt Romney and the RNC: Stoking The Racial Politics Of Yesteryear.” Then-DNC Chairwoman Debbie Wasserman Schultz accused Romney of employing racist dog whistles when the now-Utah senator discussed welfare reform.

John McCain: The late Arizona senator is now widely revered by the left, but was consistently accused of racism after he became the Republican presidential nominee in 2008. At the time, McCain faced accusations of “inciting hate and hate speech,” and siding with “religious and political extremists,” among other accusations. Democratic Georgia Rep. John Lewis even compared McCain to former Democratic Alabama Gov. George Wallace, a staunch segregationist in the 1960’s and 70’s.

John Roberts: The Chief Justice faced down accusations of racism after he wrote a 5-4 opinion declaring that partisan gerrymandering was outside the Supreme Court’s purview. The website “Above The Law” accused the high court of attempting to “lock in white minority rule,” and compared the ruling to the court’s infamous “Dred Scott” decision. (RELATED: Chief Justice Roberts Has Begun To Make Some Conservatives Nervous)

George Will: The conservative-leaning “Never Trump” columnist recently faced protests ahead of a commencement speech at Princeton. The activist organization Princeton IX Now referred to Will as a “sexual assault denier, a climate change disavower, and a racism dismisser.”

Candace Owens: A black conservative activist, Owens has repeatedly been accused of enabling racism. The Root has called Owens “Racist white America’s black friend” over her testimony at a House of Representatives hearing earlier this year on white nationalism. Following the hearing, Newsweek accused Owens of defending white nationalism.

Ben Shapiro: The conservative commentator has been repeatedly attacked online by white nationalists, with the Anti-Defamation League reporting that Shapiro was the top target of the racist alt-right group in 2016. Still, The Economist called referred to Shapiro as “the alt-right sage without the rage” in a profile earlier this year.

Jordan Peterson: A Canadian professor and popular lecturer, Peterson has been the subject of angry protests on college campuses across the country. Earlier this year, the University of Cambridge rescinded a visiting fellowship to Peterson following intense backlash from students and faculty. Peterson told the Daily Caller at the time that he believed the university was engaging in “cheap, political posturing.”

ICE Analyst: ICE analyst and U.S. Marine veteran Justin Gaertner was falsely accused by a fact checker at The New Yorker last year of having a Nazi tattoo on his elbow. ICE later clarified that Gaertner’s tattoo was actually a “symbol for his platoon while he fought in Afghanistan.” The fact checker later resigned.

Anti-MS-13 Republicans: Paul Waldman of The Week wrote last year that “MS-13 is Republicans’ New Willie Horton,” accusing Republican politicians of using the international criminal gang for racist fear-mongering. The piece specifically accused Trump of racism for referring to violent gang members as “animals,” a term Democrats have since seized on to call the president a racist.

Zina Bash: The former Trump administration official and clerk for now-Justice Brett Kavanaugh was accused by liberal conspiracy theorists of making a white nationalist symbol when she flashed an “OK” sign at Kavanaugh’s confirmation hearing. Bash is of Mexican and Jewish descent and her grandparents were holocaust survivors.

Bret Weinstein: The left-leaning college professor lost his job at Evergreen State College after he objected to a “Day of Absence,” in which white students were expected to leave campus for a day. Weinstein testified last year at a House of Representatives hearing on free speech, and said that he believed many college campuses had transformed into cults. (RELATED: Evergreen State Police Chief Resigns: ‘We Should Have Rifles’)

Miss Michigan: 20-year-old Kathy Zhu was stripped of her Miss Michigan title after allegedly violating the “good character” requirement of Miss World America. The organization cited a 2017 tweet from Zhu, where she asked “Did you know the majority of black deaths are caused by other blacks?” The Chinese-American former pageant contestant is a staunch Trump supporter, and has amassed a large social media following under the nickname “political Kathy.” 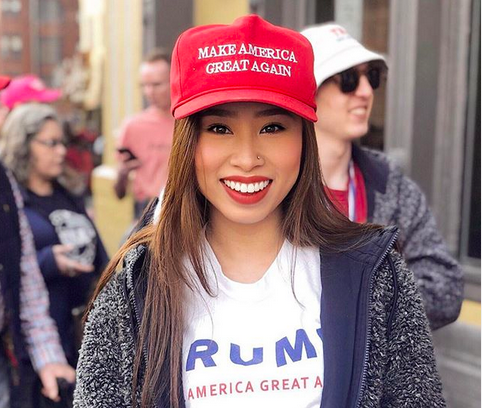 Chris Pratt: The popular actor and outspoken Christian was recently attacked by Yahoo News for wearing a Gadsden flag T-shirt, which the news outlet initially described as racist, before correcting its headline. The original headline was titled: “Chris Pratt Criticized for White Supremacist T-Shirt.”

Random Chipotle Employee: A Chipotle restaurant in St. Paul fired a manager after she refused to serve a group of black men in a video that went viral last year. However, it was later discovered that the men had a history of “dining and dashing” and bragging about their actions on Twitter. The manager was later offered her job back.

1
Antifa Group To March Alongside Pro-Gun Protesters In Virginia
US
2
Texts From A Mysterious Belgian Number Shed Light On Possible Surveillance Of Ambassador To Ukraine
Politics
3
Tucker: EPA Has Stopped Monitoring This Dangerous Pesticide To 'Protect Big Agriculture,' And Your Kids Could Be At Risk
Media
4
'I Want Trump Out!': Migrants Plan To Cross US Border Once Trump Leaves Office
World
5
Here's A Look At One Ohio Town Where The Manufacturing Jobs Are Coming Back
American Renewal