Former United Auto Workers union vice president Norwood Jewell was presented as a “Miller-Lite kind of guy” by his attorney, but prosecutors painted a picture of a “fat cat” living a life of luxury funded by illegal payments from Fiat Chrysler in a memo put out Tuesday.

Jewell was accused by prosecutors of attending “over-the-top” parties thrown by Fiat Chrysler and spending two months in a Palm Springs, Ca., villa funded by the car company Fiat Chrysler Automobiles, which was attempting to influence labor negotiations with the auto workers’ union, according to the Detroit Free Press.

“Instead of seizing the opportunity to zealously and honorably represent the interests of the union’s members and their families, Jewell chose to serve his own interests and to live the life of a big shot and fat cat,” a sentencing memo released Tuesday by the prosecutors said. “If that alone were not bad enough, Jewell’s actions also eroded public confidence in our country’s collective bargaining system and sullied the reputations of all honest trade unionists in the UAW.” (RELATED: YouTubers Join Europe’s Largest Trade Union, Demand YouTube Respond Within 24 Hours) 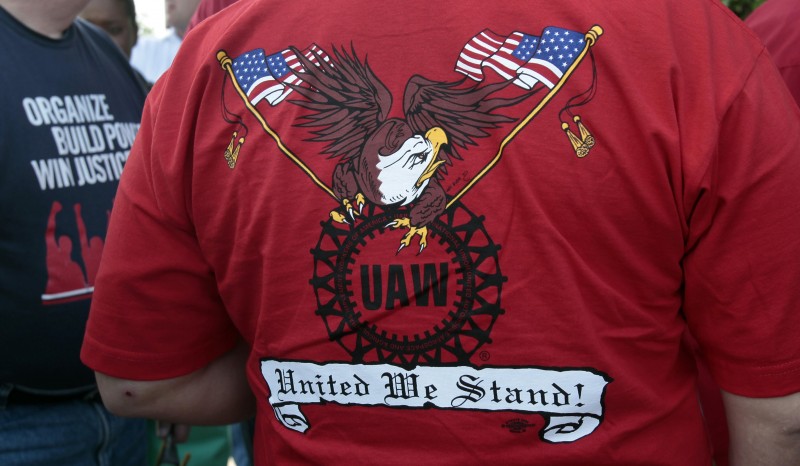 A United Auto Workers union member wears a shirt with ‘UAW United We Stand’ on it May 25, 2012. (Photo: REUTERS/Rebecca Cook)

At an “over-the-top” party Jewell threw in 2014 using $25,065 of Chrysler Fiat money, all attendees were presented with special wine bottles bearing the message, “MADE ESPECIALLY FOR YOU BY UAW VICE PRESIDENT NORWOOD JEWELL IN THE USA,” according to the memo.

The next year, Jewell used Fiat Chrysler money to throw a $31,165 “Miami Vice”-themed party, which included scantily clad “Kandy Girls” who walked around the venue lighting the cigars of UAW bosses. The Kandy Girls, which cost $750, reportedly disgusted some female UAW officials.

Jewell also used Chrysler Fiat money on multiple thousand-dollar meals at a Detroit steakhouse, Disney World passes, a $2182 shotgun made by the luxury Italian brand Beretta, rounds of golf, and a three-bedroom villa he lived in for two months in Palm Springs, California, according to the memo. (RELATED: Union Officials Allegedly Funneled More Than $1 Million To Their Own Pockets)

Jewell is just the latest UAW official ensnared in the Fiat Chrysler-UAW training center scandal, in which millions of dollars meant for auto worker training was redirected to line the pockets of UAW officials, according to the Detroit News,. The high-profile scandal has already led to the conviction of eight people.

Both the prosecution and the defense agree that Jewell is responsible for $40,000 to $95,000 in illegal payments. The defense, which portrays the vice president as a selfless man who nonetheless made mistakes, is pushing for home confinement, while prosecutors want a 15-month sentence for Jewell, according to the Detroit Free Press.