Despite periodic efforts to produce new models for present-day riflemen, it’s as if Mauser has been trapped in the amber of its valiant past. Recent developments have resulted in small runs built on various turnbolt and straight-pull applications—including deluxe sporters based on the legendary Model 98—which remain fiercely strong, reliable and handsome, but somehow lack the gritty certitude of the Mausers that armed the Kaiser, the Wehrmacht and scores of other armies around the globe, and in so doing set the bar for what a working rifle should be.

All that is history, and back in 2018 Mauser resolved to break out via the release of a new volksgewehr, the M18, a people’s rifle for the 21st century. Lest anyone get the wrong impression, however, this is no battle arm, but rather an economy-class hunter that takes design cues from other recent releases.

The new Mauser is part of a trending class built on cylindrical receivers containing bolts notably stouter than the traditional pipe-stem type. In fact, the M18’s fat, 0.805″ bolt shank completely fills the inside of the receiver and actually exceeds the lug diameter by a few thousandths, thus negating the need for raceways or other internal guides. As a result, cycling the action is as smooth and rattle-free as you’ll find on any Mauser, and because the push-feed bolt has three locking lugs instead of two, the M18’s bolt throw is shorter and quicker than the Model 98’s. Another trendy, perhaps useful, touch is that the old-school straight handle ends in an oversize polymer knob. 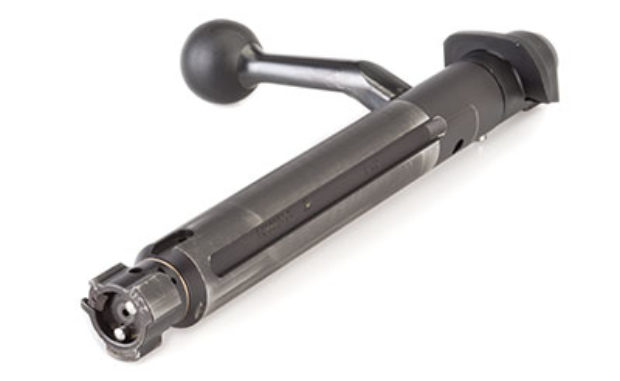 Unlike the Mausers of old, the M18 utilizes a push-feed bolt with three locking lugs instead of two, resulting in a shorter and quicker throw than the Model 98’s.
–

All of that follows the general design template for the efficient, and therefore inexpensive, manufacture of affordable but entirely capable bolt guns. In addition, the new Mauser exhibits striking similarities to features found on the likewise recently introduced Sauer 100 Classic XL, which is not all that surprising since both historic brands reside under common corporate ownership and are built in the same factory in Isny, Germany. The bolts are nearly identical, down to their twin ejectors housed in the bolt face along with an extractor clip. Reportedly, the double-team makes ejection more predictable.

Also similar is the recoil shoulder produced by mating a small steel plate embedded in the stock webbing with a crosswise slot milled into the bottom of the receiver. Obviously this structure doesn’t equal the bearing surface of larger, traditional recoil lugs, but it’s been used in various forms since being introduced in the Sako 85 in 2007, and while we are not aware of any problems, it should be noted that chamberings for rifles so-equipped typically top out around the .300 magnums. Such is the case for the M18, which is offered chambered in .243 Win., 6.5 mm Creedmoor, .270 Win., .308 Win., .30-’06 Sprg., 7 mm Rem. Mag. and .300 Win. Mag.

Our test sample came in .308 Win., and was fitted with a 22″, cold-hammer-forged barrel that measured 0.737″ at its midpoint and 0.661″ at the muzzle. That puts it between medium- and heavy-sporter contour, which is quite stout for a 6-lb., 8-oz. rifle. The receiver wears a dark matte coat, while the barrel has a shinier satin finish; it’s a good look, but we couldn’t help but wonder why the two don’t share the same treatment.

The M18’s black synthetic stock is an injection-molding that incorporates the trigger guard and also boasts a “trapdoor” buttpad that can be freed by depressing opposing tabs marked with Mauser’s logo. Though small, the interior compartment could plausibly store cleaning supplies, plastic gloves and/or a mini flashlight. The stock styling is American contemporary, highlighted by a straight comb that’s nicely fluted in the front. Grip and fore-end inlays of a softer material improve user tactile control in the absence of checkering. Since the detachable, five-round magazine is made of a hardshell polycarbonate, there’s no actual bottom metal. However, because they are resistant to deformation and have a very slick surface, such magazines are easy to load and may outlast similar aluminum components.

(l.) A “trapdoor” buttpad allows for the stowage of small items such as cleaning tools, plastic gloves and/or a mini flashlight. (r.)

The rifle’s controls also proved to be top-notch. Though the trigger displayed slight front-end creep, it broke so cleanly at 3 lbs., 6 ozs., after getting accustomed to the rifle, it was almost like having a two-stage unit. The pull weight is user-adjustable via a tiny screw inset in the trigger blade. The safety toggle has three settings, and along with what you’d expect fore and aft, the middle position blocks the trigger while still allowing bolt travel.

We fired about 110 rounds through the test rifle, and, as expected, experienced no malfunctions or failures to fire. Indeed, its trim weight notwithstanding, the rifle was pleasant—and satisfying—to shoot, both from the bench and using field positions. Better yet, the M18 can hold a group. Our best result came from Federal Gold Medal Berger Juggernaut Match, which averaged 1.04″, but big-game loads from Barnes and Winchester weren’t far behind. Considering the bench shooting was done with a budget 3-9X scope, that’s confidence-building precision. 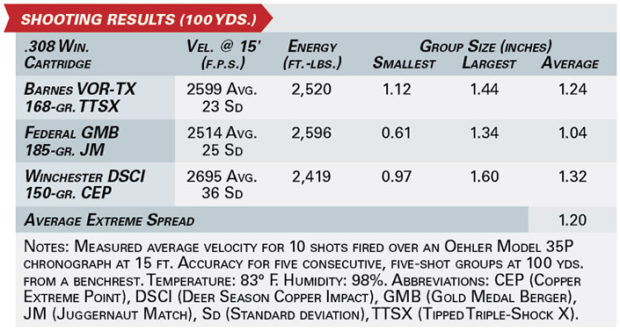 At an MSRP of $699, the M18 is priced a bit higher than most competing models, but well below any new-production Mauser since the height of the Cold War. While rifles in this class are typically spartan, the M18 offers a few extras along with better-than-expected test results. Purists who can’t separate the brand from its full-length-extractor/controlled-round-feed legacy won’t be fans, but hunters seeking an affordable rifle with reasonable expectations of Mauser performance and durability, likely will be.