Imagine shooting a British sporting-clays gun anointed with Royal Warrants from every reigning monarch since Queen Victoria, up to and including present day. It’s a 12-gauge tour de force that moves to the target with grace and deportment – even on that low chartreuse crosser that blends against the leafy background until the trees swallow it like a tasty mint.

The guy at Otter Creek Farmstead and Distillery in Ohatchee, Alabama who loaded the wobble trap, got a laugh from that one. The machine was stacked with a variety of targets that challenged the well-heeled group who had gathered on the stone terrace to try the new trigger-plate Sporting Clays Gun from James Purdey & Sons. 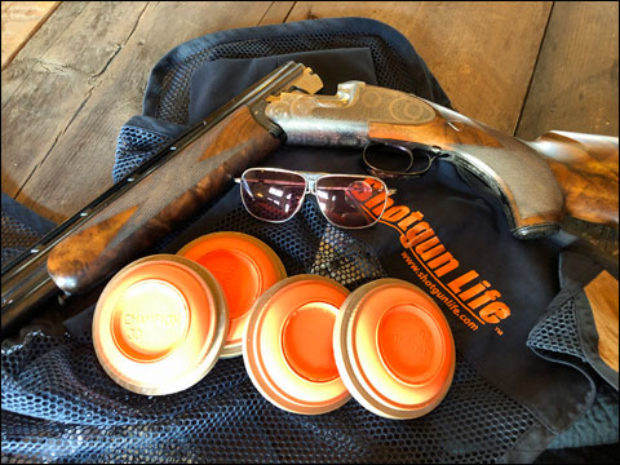 The new Purdey Sportings Clays Gun that tackled the wobble trap at Otter Creek Farmstead and Distillery. From this angle you can see the beautiful rounded action that contributed to a comfortable shooting experience.
–

Yeah, okay, he got me on that chartreuse screamer, but over several hours delicious revenge would be mine. Target after target was pulverized shooting what is believed to be the first true sporting clays gun from a British best-gun maker.

With wobble trap you never know what to expect next. Fast quartering targets that took five yards to process brought out the measured precision to crush the eventual long shot. Purdey’s Sporting Clays over/under was designed to shoot a touch high (55/45): straight-away outgoers, clear and robust, disintegrated with a pull of the silky trigger. Purdey’s Sporting Clays Gun lets you luxuriate at a fluorescent orange disk soaring into the pearl blue sky; the gun easily moves to the break point, letting loose a pyrotechnic extravaganza that lights up your eyes and mind.

One participant razzed his buddy by shouting “I’ve never seen you shoot that good” and his friend countered “It’s not me, it’s the gun.” 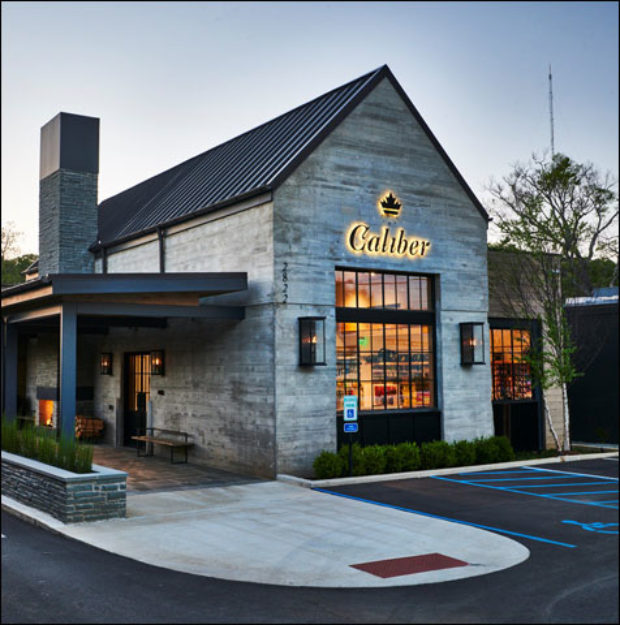 The Purdey Sporting Clays Gun event had been organized by Caliber – the upscale sporting store in the Birmingham, Alabama suburb of Homewood. Caliber, which bills itself as Masters of the Outdoors, is a Purdey agent. From Caliber, it was an hour drive northeast to Otter Creek Farmstead and Distillery in Ohatchee, Alabama – a fitting Purdey venue.

Ensconced in lush rolling hills, the hospitality, architecture, amenities, landscaping – every detail – clearly showed that owners, Jane and Frank Brown, meticulously fulfilled their vision of a luxury Southern quail-hunting and fishing lodge. Our shooting was followed by a delicious casual lunch from native Southerner Chef Carl Tilley in the open kitchen of the banquet-sized Grand Room. 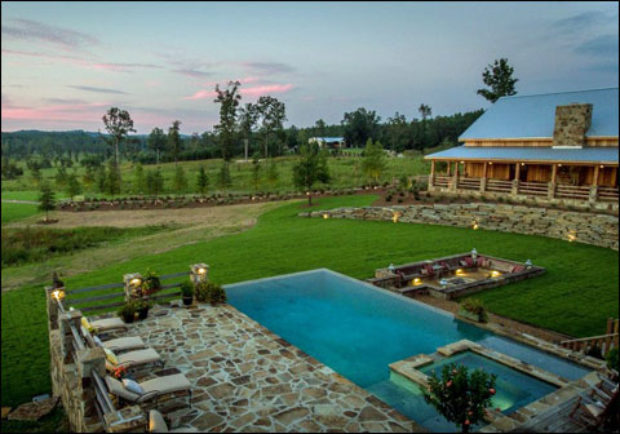 The night before I had gone to dinner with Mr. Juer and his Purdey associate, Alastair Bowles, at Perry’s Steakhouse & Grille in Birmingham to get details in advance about the new Sporting Clays Gun. On a breezy summer night, while enjoying our steaks on the terrace, Mr. Juer discussed the shotgun and its origins.

The shotgun I would be shooting at Otter Creek Farmstead and Distillery weighed 8 pounds/11 ounces. It was the standard model. The length of pull was 15-3/16 inches. There was a push-button, drop-out inertia trigger group. The gun had 31-inch barrels with ¼-inch forcing cones, steel beads and Teague extended portedchokes. With its gentle ramp, the vented raised rib sat 5mm over the barrel and tapered from 11mm to 7mm. The side ribs were also doublevented. The rounded silver finishaction wore an updated versionof the classic hand-engraved rose and scroll pattern. A Purdey slender forend would enhance handling. The de facto furniture is Turkish walnut hand-rubbed, satin-oil finished and complemented by a palm swell, engraved steel grip cap and leather-covered recoil pad. Mr. Juer noted that although it appeared to have a pistol grip, he called it the “Purdey pistol grip” with a slightly wider radius and lower-than-normal palm swell for better ergonomics. The shotgun is made entirely in Purdey’s London workshop.

As with all Purdeys, the Sporting Clays Gun is fully bespoke. Case coloring can substitute for silver. Barrel lengths vary from 28 to 34 inches, with choke options from fixed to flush Teagues. Want your extended chokesported? No problem. Auto-safety, manual safety – either is available. Engraving is only limited by your imagination and investment portfolio. 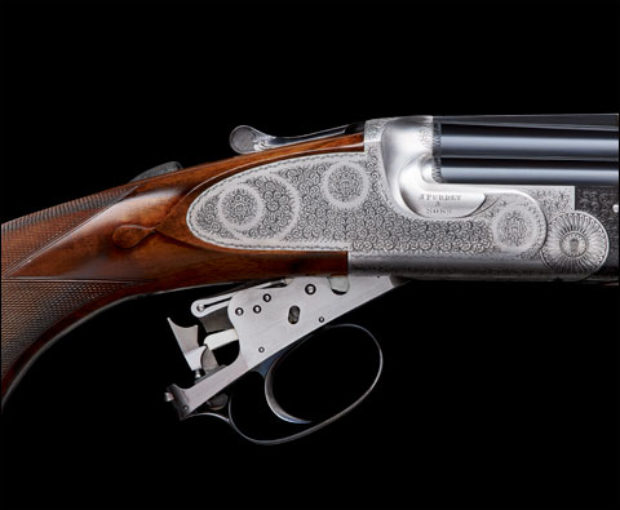 The Purdey Sporting Clays Gun. The drop-out trigger group is released with the push of a button.
–

Ultimately, the Purdey Sporting Clays Gun is a brilliant move by the 205-year-old company to stay relevant.

“Some people may be surprised that Purdey actually came out with a sporting clays model, but in fact the gun shows impressive forward-looking vision,” said Guy Bignell, Griffin & Howe’s former President and fine sporting firearms specialist for Purdeys. “The trigger-plate Sporting Clays Gun is another example of the new management innovation. In its execution, Purdey built a gun that belies its weight with incredible balance and handling dynamics.”

Purdey saw demographic market shifts on the horizon. In response, nearly five years ago they started development of a strong trigger-plate action expressly designed to sustain the most rigorous driven pheasant hunting. The venerated side by side for driven high birds would have difficulty keeping up with a new generation of shooters who preferred the durability and ruggedness of Perazzi, Krieghoff and Beretta in their quest to shoot increasingly heavier loads. 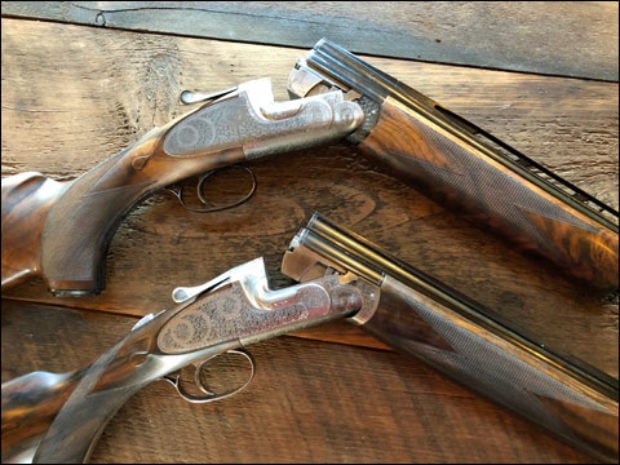 At Otter Creek Farmstead and Distillery, the Purdey team brought two guns to shoot. On top is the Purdey Sporting Clays Gun, accompanied by its predecessor, the Purdey Trigger Plate Gun.
–

During R&D, Purdey had pushed more than 150,000 rounds through the trigger-plate action. Machined from an EN36 steel billet, a steel box around the trigger group has been strengthened like a vault for very hot ammo and even hotter shooting. The shotgun has a chopper-lump underlug and Boss-inspired bifurcated lumps that draw against bosses machined into the side of the receiver.

Come June 2019, at Otter Creek Farmstead and Distillery, the Sporting Clays Gun we shot had a trigger-plate action that had logged more than 250,000 rounds. Mr. Juer told the group that so far, zero malfunctions.

“Our trigger-plate action is all about reliability,” he said. 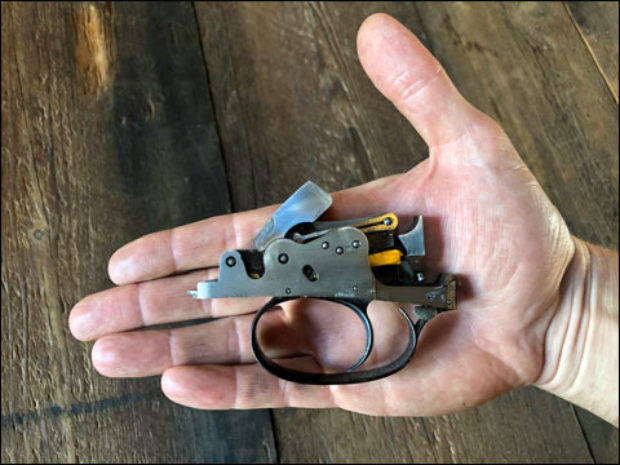 It was there that I spent some time with Purdey Chairman James Horne who had told me that development of the trigger-plate action was part of a larger change at Purdey “…to reinvent the company for the next century.”

In part that also meant paying closer attention to the American market, where Purdey discovered that we love to shoot clays, and moreover a worthy sporting clays gun would open new sales opportunities for other Purdey guns.

In December 2018 I shot the gun again at Griffin & Howe’s Hudson Farm. Purdey had established a U.S. Northeast base of operations there. Hudson Farm’s astounding sporting clays course, replete with simulated driven birds, plus its high-tech 1,000-yard rifle range, give clients a chance to evaluate Purdeys in the field. While my first go-around with the Purdey Trigger Plate Gun was on pheasants, this time it was sporting clays where the 8 pound/11 ounce prototype heavyweight gunhandled more like a remarkably effective 7-pounder (see the story on Shotgun Life at https://www.shotgunlife.com/kudp). (It’s worth noting that most of the standard weight Purdey trigger plate shotguns for wingshooting actually weigh 8 pounds/4 ounces. The shotgun made available at Hudson Farm was a heavy-weight prototype.) 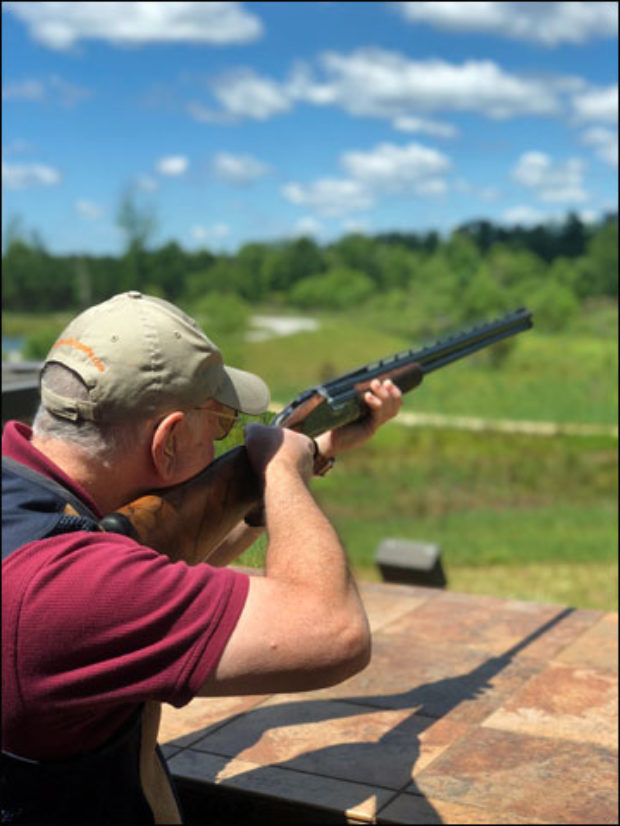 The Purdey Sporting Clays Gun shot at Otter Creek Farmstead and Distillery is the next application of that trigger-plate action.

“Once the Purdey Trigger Plate Game Gun was launched in May 2018, I got the go-ahead to do a sporting clays gun,” Mr. Juer told me. “I started to put together a team to design the gun.”

One member of the team was American Don Currie, chief instructor of the National Sporting Clays Association. 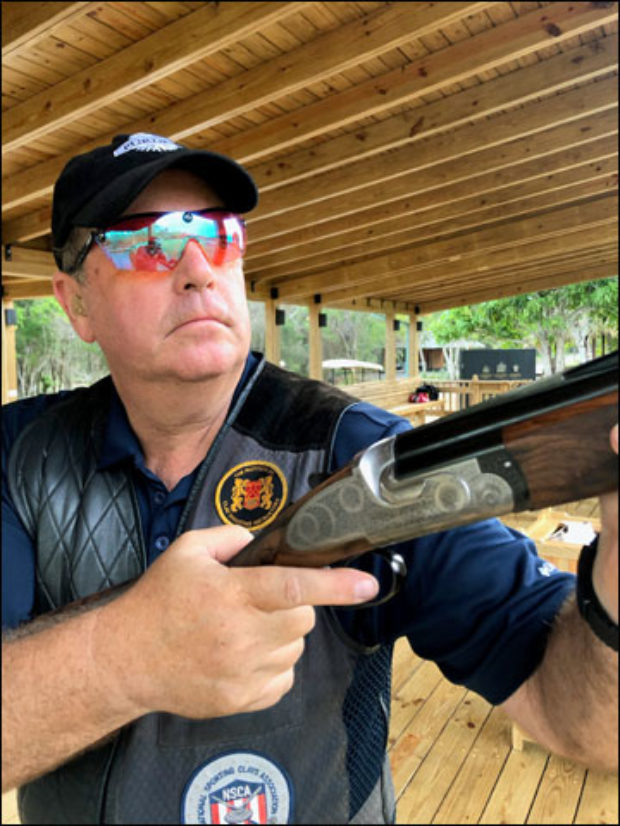 “Basically, I had a happenstance meeting with Purdey at Wing and Barrel Ranch in April 2018,” recalled Mr. Currie. “I was there doing gun fittings and instruction. I did gun fittings for George and Simon Rood using my try-gun and they came out spot-on. That’s how the relationship began.”

A few months later, Purdey invited Mr. Currie to London “to take the relationship to the next level,” he said. “They wanted me to be a Purdey gunfitter and asked for my input on a new sporting clays gun they were designing.”

In London, he met the other five members of the design team. They spent close to two days on defining the Purdey Sporting Clays Gun.

“We sat down with a large piece of butcher paper and sketched out the specifications,” said Mr. Currie.

“We said let’s have a blank sheet of paper and start out with the strongest action with have,” explained Mr. Juer.

That initial meeting in London was followed up by email exchanges between Mr. Currie and Mr. Juer.

“The first trigger-plate Sporting Clays Gun that came out of the workshop was perfect,” said Mr. Juer. 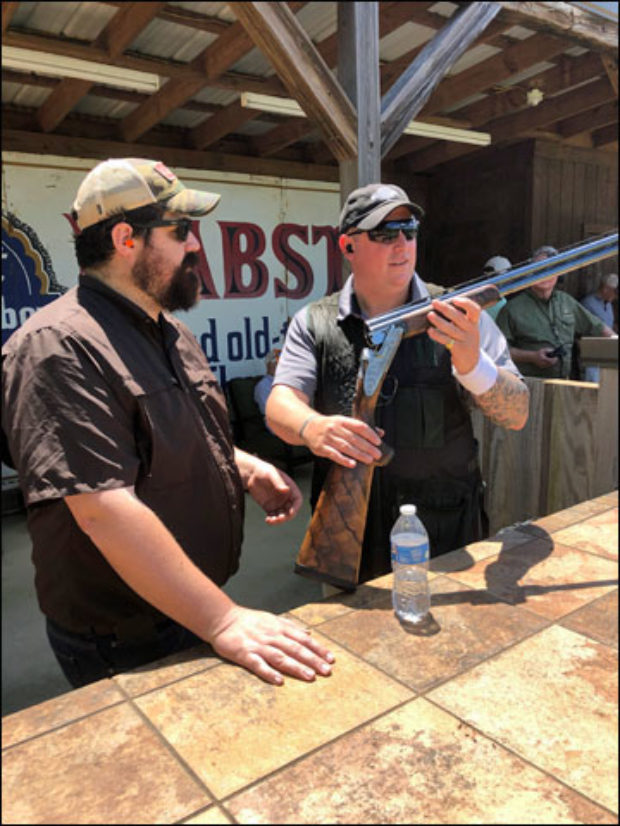 Mr. Juer points out that although the Sporting Clays Gun and its sister Game Gun share the same trigger-plate action, they are designed to handle differently. The Purdey Trigger Plate Game Gun emphasizes balance along its entire length. The Sporting Clays Gun, meanwhile, focuses on between-the-hands balance.

“A shotgun balanced between the hands will swing faster,” he said. “All Purdey Trigger Plate shotguns, regardless of personal preferences on barrel or stock lengths, will always handle the same. Everything is in proportion. That’s why we can take a gun that weighs 8 pounds/11 ounces and make it feel like an 8-pounds/3-ounce gun. And most of the sporting clays gun on the market weigh around 8 pounds/5 ounces.”

The thinking behind the heavier Sporting Clays Gun is that the extra well-placed weight helps absorb felt recoil. At Otter Creek Farmstead and Distillery we shot 1-ounce loads – not really giving me the opportunity to test felt recoil against the bigger 1⅛-ounce, 1200 fps shells I usually shoot. 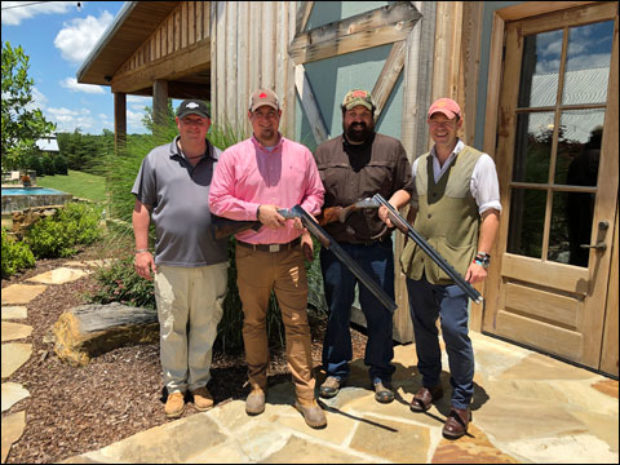 I did discover that the Purdey Sporting Clays Gun handled like a lighter shotgun – supporting Mr. Juer’s theory about between-the-hands balance transcending mass.

One guest told me “It didn’t feel that heavy.”

I think that for many of the event’s participants the Purdey Sporting Clays Gun was an enjoyable surprise.

By the end of the shoot, it became clear that Purdey wasn’t simply interested in building another sporting clays gun, but instead set out to reinterpret prevailing designs and theories into a firearm that defies foregone expectations. To really appreciate the Purdey Sporting Clays Gun you have to approach it with an open mind. The Purdey Sporting Clays Gun is not one of those shotguns that sparks love at first shot. Its genius grows on you. Maybe it will take a box of shells or two or three before you start to realize that it’s a true marvel.

So far Purdey has taken “quite a few orders” for the Sporting Clays Gun, according to Mr. Juer. If you’re interested, write a deposit check against the starting price of $82,000 (actually £65,000) and wait eight to 12 months for delivery.

Irwin Greenstein is the publisher of Shotgun Life. You can reach him at contact@shotgunlife.com