Multiple Attacks Caught On Video During Antifa Demonstration In Portland 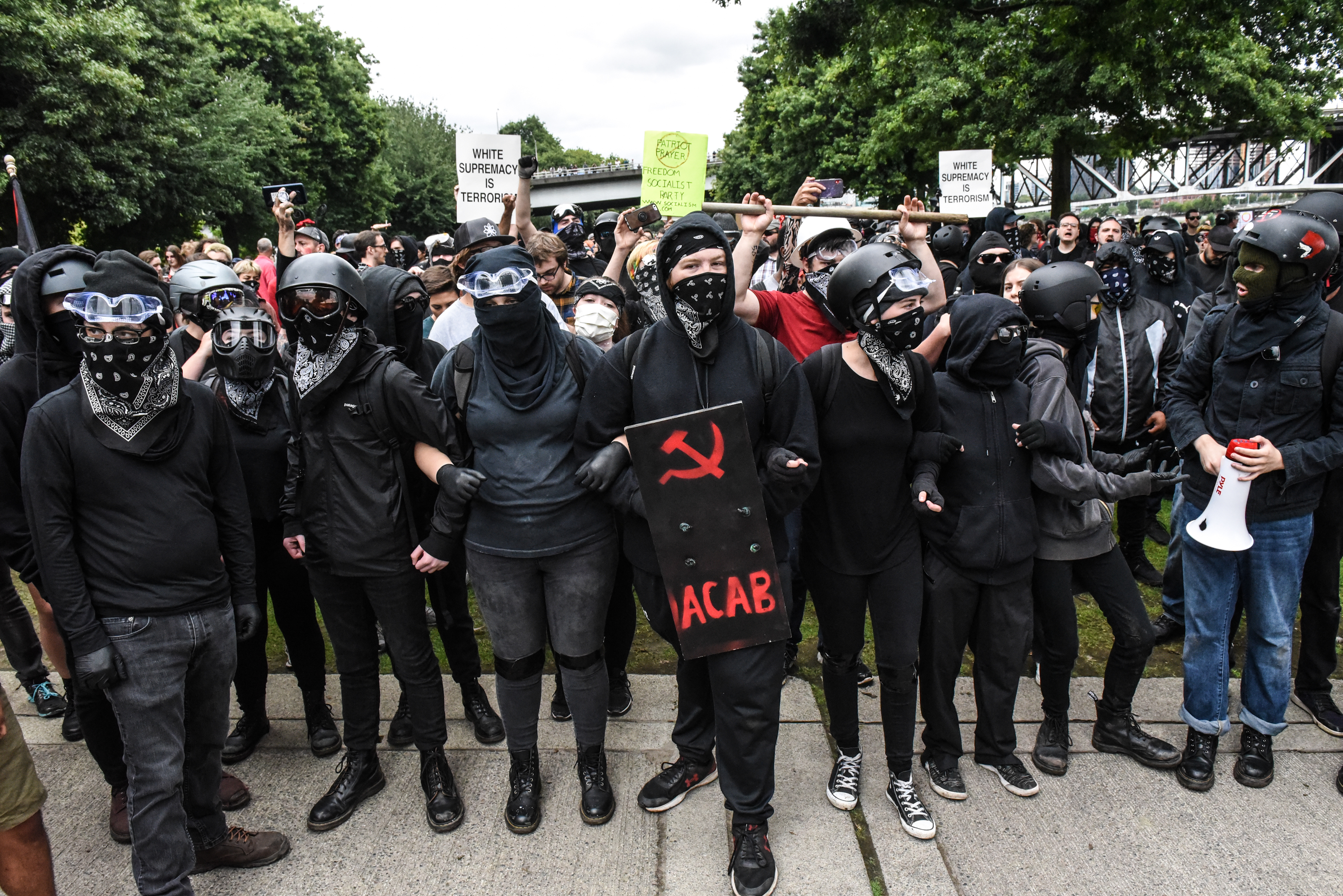 A series of Saturday clashes between Antifa and right-wing groups were caught on video and posted to Twitter by journalists Andy Ngo, Elijah Schaffer and others.

Portland’s Rose City Antifa comprised one of the leftist groups there to oppose right-wing demonstrators from various organizations, including Proud Boys, Oathkeepers, and Three Percenters.

President Donald Trump tweeted Saturday morning that the city was “being watched very closely” with consideration “being given to naming Antifa” a terrorist organization.

Major consideration is being given to naming ANTIFA an “ORGANIZATION OF TERROR.” Portland is being watched very closely. Hopefully the Mayor will be able to properly do his job!

TheBlaze reporter Elijah Schaffer documented interactions throughout the day, including Antifa being joined by “about 300 other people from generic liberals, the NAACP, dog fetish sex costumes, the lgbtq community and much much more.” (RELATED: Watch: Antifa Members Condone Violence Against Journalist Andy Ngo)

PORTLAND: About 80 Antifa already gathered and about 300 other people from generic liberals, the NAACP, dog fetish sex costumes, the lgbtq ????️‍???? community and much much more.

Things are peaceful, mostly songs and speeches so far, group is growing pic.twitter.com/C99K2Dwbr7

The current resistance standing up against the police pic.twitter.com/oF7c9kFLfA

Schaffer posted a photo of a shirtless man “leading Antifa.”

This is who’s leading Antifa pic.twitter.com/yTmg148DGi

Antifa just threw a shake at this older gentlemen walking away from the protest pic.twitter.com/0CWBxks2rO

Then, the action got underway:

Things are heating up in Portland pic.twitter.com/zwq75qozCF

Pepper Bullets are officially being shot at protestors in Portland after at least one arrest has been confirmed pic.twitter.com/4Vs4MJqfOF

Soon, Antifa was chasing protesters through Portland streets and clashing with the Proud Boys.

Riot police on the scene, protestors on the ground cheered cops to jump off and kill themselves pic.twitter.com/baXhglUIRJ

???? BREAKING ???? Antifa has major CLASH with Proud Boys on Portland bridge in traffic

A serious assault took place on PB’s after they busted the door of the bus, they also threw a metal hammer at them.

I also got pepper sprayed in the face with many others. Sorry for language pic.twitter.com/UwRsY4qq6G

Journalist Andy Ngo, who regularly covers Antifa in Portland and recently suffered a brain hemorrhage during an attack, captured or reposted several clips of footage as well.

A black man praises Jesus on a bullhorn. The shirtless protester yells at him: “Ain’t no f—ing white Jesus going to save the black man from the white man’s oppression, uncle Tom.” pic.twitter.com/CRMuxFF41p

This man was just taken down and arrested. According to @TPostMillennial, he may have had a gun. #PortlandProtest
pic.twitter.com/hZUgrpmxKY

Independent journalist @Muffinpan503 was attacked & pepper sprayed. A woman tries to calm the angry shirtless man following him but is told to mind her own business as a white person. pic.twitter.com/SeQb2A2gTX

“I didn’t come to talk, I came to bring it out.” Things are getting tense at the antifa protest. Someone hit a man’s microphone to the ground.

I recognize this shirtless man from Seattle last year at another antifa protest. He came up to me and said, “Death is coming.” pic.twitter.com/mzK2i9y5Gl

As mob continued to follow the small group going to their cars, a masked antifa person ran up & stole the man’s flag. They mock the group before police finally step in again. They offer to escort the group, which angers the mob. Great footage captured by @TPostMillennial! pic.twitter.com/OMgeLDffkm

The aggressive antifa shirtless man who was threatening people was arrested by police. This angered the mob who said this was police bias. #PortlandProtests pic.twitter.com/OYDsyLw3EY

Ngo documented an Antifa mob chasing and attacking a man and a young girl who got separated from their group.

A large antifa mob chase & attack a man & a young girl who got separated from the others. No police. #PortlandProtests pic.twitter.com/erceCRVnad

More anarchy and chaos in Portland by antifa. pic.twitter.com/WHr8VQWzhP

Antifa attacks people on a bus. They try to pull them out and hit them with a hammer. #PortlandProtests pic.twitter.com/JSkCE1Vrcy

Other attacks included a man who Ngo reported “was maced and beaten.”

Middle-age man was maced and beaten by an antifa mob. He was knocked unconscious to the ground. His partner or spouse was trying to protect him as mob still surrounded them. No police. #PortlandProtests pic.twitter.com/eAhrMSEKU1