After an attack on journalist Andy Ngo by Antifa at a rally in Oregon, some journalists have come out in defense of the far-left group and are attempting to smear Ngo as a “fascist-adjacent propagandist.”

Ngo, who is known for reporting on Antifa, was beaten by the group on Saturday during the rally he was covering. The injuries were severe enough for him to be taken to the ER where they found out he had a brain bleed.

After the attack, journalists, many of whom have close connections to antifa themselves, rushed to downplay the significance of the attack. They have downplayed the injuries Ngo sustained, avoided mentioning antifa in the reports, and shifted blame by claiming that Ngo provoked the attack. (RELATED: Journalist Andy Ngo, Who Says He’s ‘Hated By Antifa,’ Assaulted At Portland Rally)

Jason Wilson is a writer for the Guardian, mentioned by Eoin Lenihan as having close connections to antifa, who wrote a piece about the Andy Ngo. In the piece, antifa is not mentioned once. Wilson refers to the attackers as “left-wing protestors.” The injuries Ngo sustained were downplayed in the piece as well, with no mention of Ngo going to the ER for head trauma. The founding editor of Quillette, Claire Lehmann called the piece “Absolutely shameful.”

Shane Burley, journalist and author of Fascism Today, peddled the claim that Ngo is a “fascist-adjacent propagandist.” His book “looks at the changing world of the far right in Donald Trump’s America” but makes no mention of antifa. Burley was also named by Lenihan as one journalist with close connections to antifa. 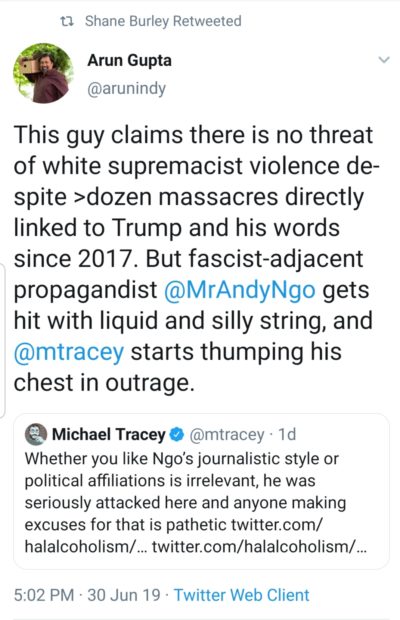 The #AntifaTerrorists hashtag has started trending, and is being used by reporters covering it, which is a misuse of terms, particularly given the fact that in the last several years terror attacks are almost exclusively a far-right phenomenon, not a left wing one.

CJ Werleman not only says Ngo isn’t a journalist and claims that he provoked the attacks, he wrote a piece in ByLineTimes defending antifa. In the piece, he labels Ngo “far-right” and a “provocateur.” He condemns the attack on Ngo by saying he finds “much of Antifa’s headline grabbing antics moronic and not within the interests of public safety”; however, the group is still good in his view because, “antifa’s existence is premised almost entirely on countering fascists of all stripes.”

Anti-fascists (you know, like Second World War veterans) attacked him not because of his race or sexual orientation, but because he’s a Muslim hating fascist who panders to and promotes white supremacists. https://t.co/aJmak1GkhA

My Latest:#AntifaTerrorists became #1 trending topic on Twitter, despite fact that zero have been killed by anyone associated with the Antifa movement, & despite right-wing extremists being responsible for 100% of all terrorist attacks since end 2017.https://t.co/Nj6DPOLX81

Mark Bray, author of Antifa: The Anti-Fascist Handbook, claimed on the day Ngo was attacked the Antifa “is neither terroist nor an organization.” Ironically, even though Bray claims Antifa is not an organization, he retweeted a tweet by the cell that attacked Ngo to raise money for the antifa members who were arrested at the rally in Oregon.

#Antifa is neither terrorist nor an organization pic.twitter.com/lCcnM7aQVm 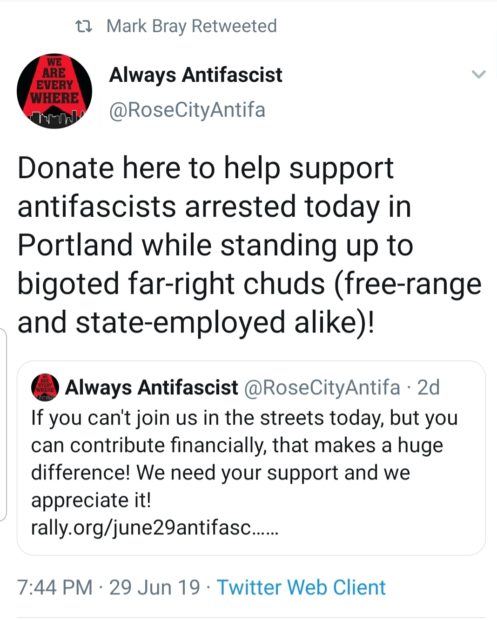 Emily Gorcenski, a transgender activist, blogger and programmer, has been labeled by Far-Left Watch as an “outspoken proponent of antifa and their often violent tactics.” She put her Twitter on private after tweeting out, “I know you are mad about Andy Ngo but you might want to sit down when you hear about what’s happening on the Southern Border.” 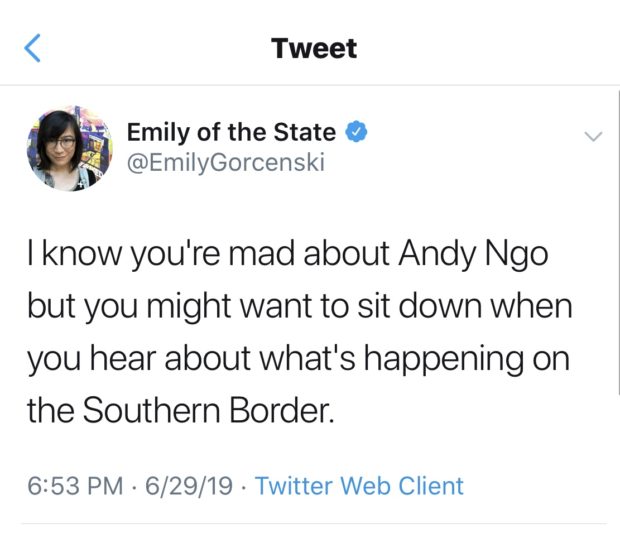 Rob Rousseau, host of the podcast 49th Parahell, mocked Ngo as a journalist and claims Ngo is far-right. Rousseau is quick to condemn the far right, but won’t do the same with antifa.

I can’t believe that the totally objective “journalist” who shows up to every far right protest in order to sanitize what they’re doing and claim the people who oppose them are The Real Fascists wasn’t welcomed with open arms by antifa today. you hate to see it

Rick Wilson, a columnist for The Daily Beast, has referred to Trump as “proto-fascist” and said “I like my facsist the old-fashioned way; dead, hanging from lamp-posts as we liberate their victims.” However, when the facsist come from the far-left he is not as quick to condemn them, or condemn that at all.

It’s not virtue-signalling; it’s virtue to oppose both the lunatic proto-fascist Trump AND the chance he elects HRC. https://t.co/lMYUuRxPc6

I like my fascists the old-fashioned way; dead, hanging from lamp-posts as we liberate their victims. 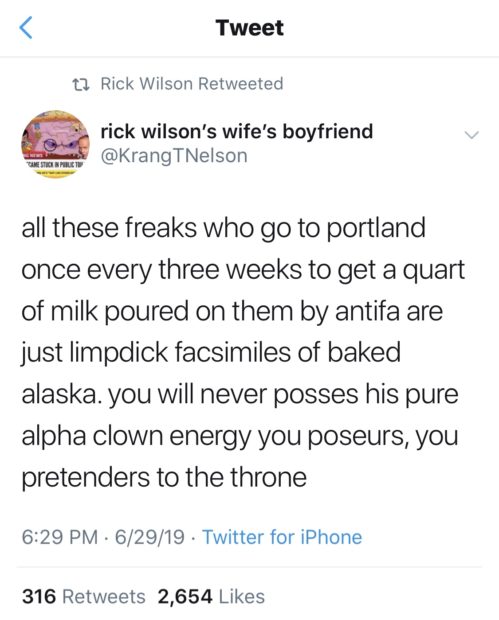 Christopher Mathias, a senior reporter for Huffington Post has reported on Antifa favorably before. Back in August 2018, Mathias wrote about another rally that happened in Portland, Oregon where he says police “targeted the local anti-fascists.” Mathias justified Antifa blocking traffic and not listening to orders from police to move saying, “HuffPost did not witness anti-fascist protesters provoke or attack police before the initial dispersal order.” (RELATED: Antifa Prepared To Fight Patriot Prayer Protestors With ‘Militant Resistance’)

In a case where clear violence from Antifa is shown, Mathias does not change his favorable stance of the group. He blames Ngo for the attack saying, “Milkshakes have this special power of revealing how fascists and their enablers are giant fucking snowflakes,” before deleting the tweet. 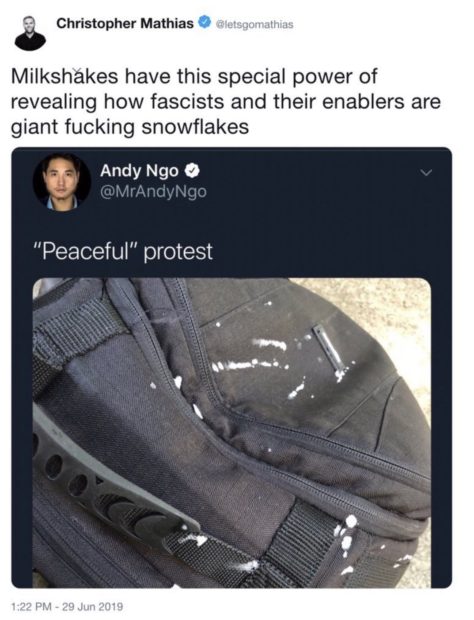 A GoFundMe was started for Ngo by conservative writer Michelle Malkin. She wrote, “My friend, Portland, Oregon-based journalist Andy Ngo, was beaten and robbed today by Antifa while covering the latest paroxysms of left-wing violence.” Originally, the goal was to raise $50,000 but after one day over $146,000 has been raised for Ngo.

BREAKING UPDATE: WE DID IT! To the 1,566 people who contributed more than $53,000 over 5 hours to help #PROTECTANDYNGO #freespeech #indiejournalism – God bless you & thank you for supporting @MrAndyNgo !https://t.co/Cw5IwMY04U@pnjaban @CassandraRules @gatewaypundit @Quillette 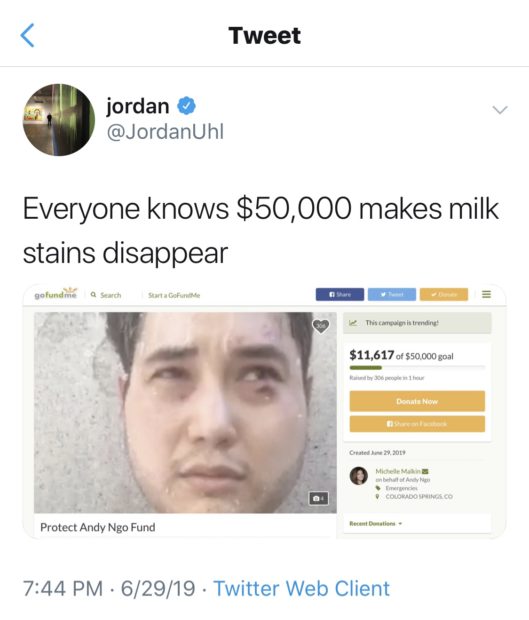 Ngo was cleared to leave the hospital last night and his lawyer tweeted that Ngo “is very thankful for the overwhelming support from decent people.”

Good news! ⁦@MrAndyNgo⁩ has been cleared to leave the hospital! He’ll have more to say in coming days about what happened to him & others yesterday in Portland. He is very thankful for the overwhelming support from decent people, especially ⁦@michellemalkin⁩ & donors. pic.twitter.com/gK3ZEHfRyE