There are many advantages to using the .22 Long Rifle cartridge to train for shooting center-fire firearms. The little rimfire round allows new shooters to start learning a fullsize firearm without the recoil and noise of a high-powered center-fire cartridge. For experienced shooters a .22 allows for more trigger time by opening access to a broader set of range facilities and saves them money on ammunition costs. Those wanting to train for the AR-15 platform with a .22 rimfire have four options: conversion kits that fit into standard AR-15s; dedicated rimfire uppers; .22 firearms that cosmetically mimic an AR; and purpose-built .22-cal. AR-15s.

Each system has its disadvantages. Conversions and .22 uppers can be hard on a center-fire rifle’s components. AR-15-style .22 rifles are close, but not exact copies, in terms of size, weight and controls. The disadvantage of the AR-15 .22 is price; since they are built with mainly center-fire AR-15 parts, they cost about the same as a center-fire AR.

In this last category is Kriss USA’s Defiance DMK22C. The Defiance is not a rifle that merely looks like an AR-15, it is a rimfire .22-cal. AR-15. Just like a standard AR, both the upper and lower receiver on the Defiance are made out of aluminum. Internally, the DMK22C substitutes the AR-15’s direct-impingement gas system, rotating bolt and buffer system for a simple direct-blowback bolt with a single recoil spring on a guide rod. Controls are identical to an AR-15, and features such as the bolt release, forward assist and dustcover are not merely cosmetic, but are fully functional.

The Defiance fieldstrips just like a center-fire AR-15. Many of its parts, including the buttstock, grip, charging handle and fire-control group are compatible with standard AR-15 parts. The DMK22C uses a blowback-operated bolt assembly (inset) in its design. Note the provision on the bolt for the use of a forward assist. The KRISS Defiance DMK22C barrel is threaded 1/2X28 for use with 5.56×45 mm NATO AR muzzle devices or suppressors, and comes with a mounted muzzle brake.

The use of standard AR components means that a shooter can customize the Defiance with his or her favorite AR parts. Standard pistol grips and charging handles fit, as do mil-spec buttstocks. The rifle comes with the same Defiance DS150 stock that Kriss uses on its Vector rifles, which is adjustable for six positions. Most aftermarket AR fire-control groups also fit, meaning you can put your favorite custom trigger in the Defiance. The muzzle of the barrel is threaded 1/2×28 TPI for use with .22-cal. muzzle devices or suppressors, and comes with a mounted muzzle brake.

The Defiance’s other area of interchangeability is its barrel. The design uses a barrel adapter that allows for the fitment of a Ruger 10/22-style barrel with its slotted mount into an AR-style upper with a barrel nut. There is room under the free-floating handguard for the heaviest of 10/22 barrels (Kriss recommends only using barrels with standard, not match, chambers). The supplied barrel has a medium-profile, and is finished in Nitride QPQ, a salt-bath hardening process applied to both the bore and the outside surface of the barrel. 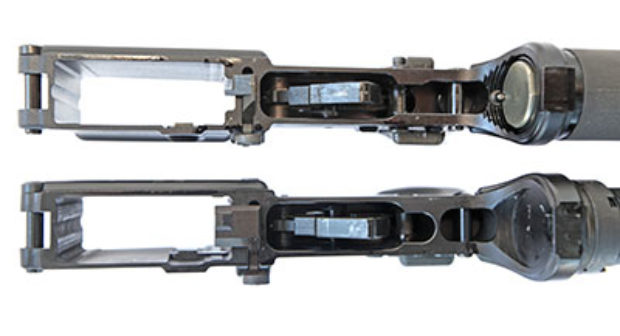 The Kriss Defiance .22 lower receiver (bottom) compared to a standard .223 Rem. AR-15 lower (top). The Defiance lower lacks provision for a buffer and action spring, but is compatible with standard AR fire-control parts.
–

Kriss has taken pains to make sure that the lower, with its lack of provision for a buffer, cannot accidentally be used with a center-fire AR upper. However, the Defiance upper will attach to and function with a standard AR-15 lower.

The 13″ aluminum free-floating handguard features a full-length top rail, which combines with the receiver rail for 20″ of uninterrupted rail space. Rail sections (available as accessories from Kriss) can be attached to the handguard at the 3-, 6- and 9-o’clock positions via screws. Though the slots in the handguard are not explicitly compatible with name brand rail systems, KeyMod rails can be attached directly with their screws.

The Defiance is equipped with the same folding backup sights that Kriss puts on the Vector rifles and pistols. The front post is adjustable for elevation and the rear adjusts for windage, with no tools required. The rear sight has large (0.177″) and small (0.059″) apertures for differing light conditions.

Kriss supplies the rifle with one 15-round magazine (a 10-round magazine is available where required by law). The magazine is identical in size to a standard 20-round AR-15 magazine, and drops free for reload training. The magazine interface is compatible with Black Dog Machine’s .22 Long Rifle AR magazines, which are available in 10- to 50-round capacities (blackdogmachinellc.net). Magazines must have a hold-open feature to work the Defiance’s bolt catch.

On the range it quickly became apparent that two things set the Defiance apart from most tactical rimfire trainers—reliability and accuracy. Right out of the box it was 100-percent reliable with any ammunition we threw at it, the bolt locking open on every empty magazine.

For accuracy testing, we mounted a Vortex Strike Eagle 1-6X scope on a Vortex mount. With its free-floating barrel design the rifle proved it had more than plinking-grade precision. The Defiance’s single-stage trigger has a slight take-up before breaking at just under 6 lbs. At 50 yds., the rifle averaged groups of just under an inch, with CCI Mini-Mags, providing near-m.o.a. results and raising the possibility that, with a heavier barrel and match-grade ammunition, you could expect the Defiance to deliver some serious accuracy. 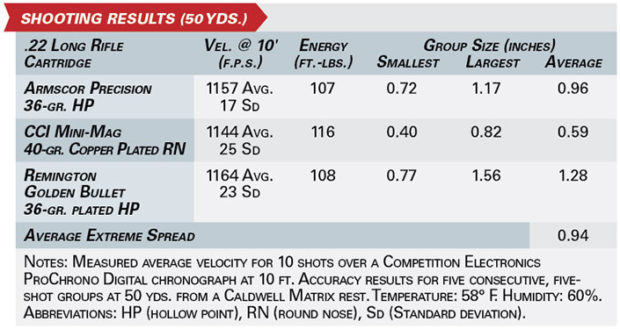 Once we finished clocking bullets and punching paper it was time to ring steel and ventilate cans. While running tactical carbine drills the Defiance handles like a fullsize AR-15. Double-taps and speed reloads failed to result in even the slightest hiccup.

With current ammunition prices, the Defiance should pay for itself in fewer than 3,000 rounds, based on the difference in cost between .22 Long Rifle and .223 Rem. ammunition. This may seem like a lot to the casual shooter, but to the competitor or serious self-defense student that may be less than a year’s worth of practice. But you don’t need economics as an excuse to like the Defiance. It combines center-fire AR features and center-fire AR performance with all of the training advantages of the .22 rimfire, providing an easy way to get in more trigger time with the AR-15 platform.