When I was growing up, Ruger’s first entry into the long gun market was their unique .44 Magnum Carbine introduced in 1960. It was a head-turner. We all lusted for the little semi-auto M1-looking carbine, chambered for the era’s most powerful revolver cartridge and a caliber companion to Ruger’s Super Blackhawk. Having a carbine and a revolver of the same caliber was heady stuff and took us back to the dreamy days of the Winchester Model 1873 and Colt Single Action Army chambered in .32-20, .38-40 and .44-40 WCF. 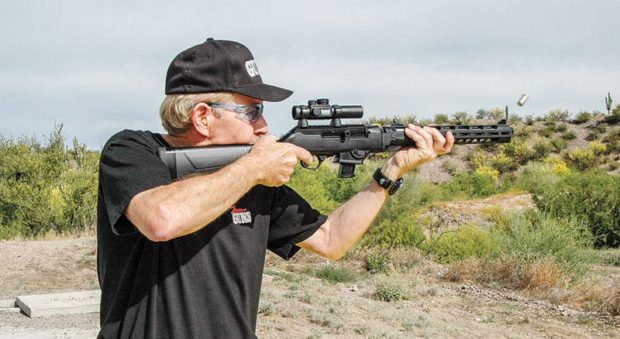 Ruger’s thoroughly updated Police Carbine is family-friendly, a plinker, a hunting gun and a natural for home defense.

Paging through the gun magazines of the era, there was ad-after-ad showing Bill Ruger, Sr. on safari in Kenya and Uganda with his .44 Magnum Carbine and an assortment of trophies ranging from leopards to waterbucks. Ad copy was as seductive as the carbine itself:

“America’s newest game rifle … Proven on the plains of Africa, the RUGER ‘Deerstalker’ carbine is a technological breakthrough for the benefit of the American sportsman — proven not only on Whitetails in North America, but on Leopard, Hyena, Wart Hog, Topi and many other species in Africa …”

To those hardy souls who remember the .44 Carbine, it was very touchy about the ammunition it would shoot, and was a bear to put back together once disassembled. Yet, I still miss mine!

Over a quarter million .44 Magnum Carbines were made through 1985. Then there was a long period of drought for the concept of a pistol-caliber carbine from Ruger. When it returned in 1998, it was designed and marketed more toward the law enforcement community as the “Police Carbine” (PC) and chambered in 9mm Luger and .40 S&W as a companion piece to the most popular duty handguns of the day.

Gone was the walnut stock of the .44 Magnum Carbine, replaced by a plain, boring, black synthetic stock. Gone was the unique bottom feeding magazine of the .44 Carbine, replaced by conventional 10- and 15-shot pistol magazines while adjustable open sights were gradually replaced by a rear receiver sight combined with a protected blade front. It was Ruger — rugged, reliable but not particularly stylish with its forearm barrel band. I suspect we mere mortals bought more PCs than all the police departments combined.

All this has changed with the recent return of the new PC Carbine in 9mm and 40 S&W. It’s a complete redesign and is being offered in 9 variations with six 9mm models and three in 40 S&W as well as four limited special editions from Talo, Bill Hicks, Lipsey’s and Davidson’s. 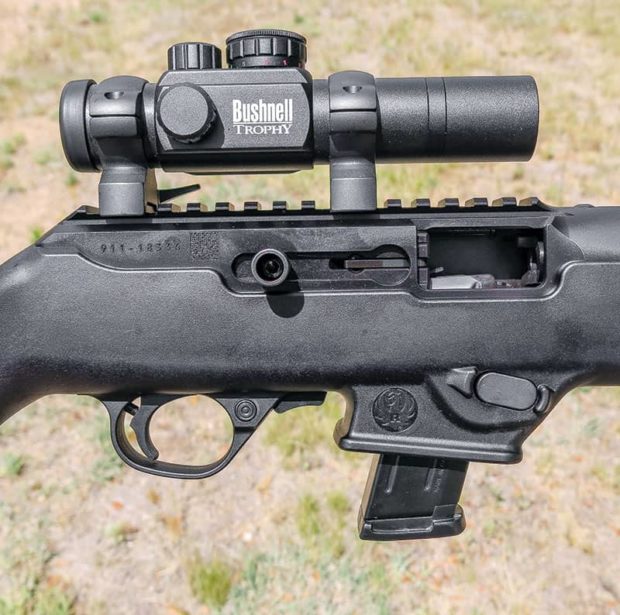 Featuring a full-length Picatinny rail, the new PC action is optic compatible and fully ambidextrous. The barrel is also threaded for suppressors and accessories

The PC model we reviewed is #19117, which is distinguished by its tactical, CNC-milled, aluminum free-float handguard with Magpul M-LOK accessory attachment slots on all four flat sides for easy mounting of M-LOK-compatible rails and accessories. With a diameter of approximately 1.8″, it’s very comfortable and hand-filling, offering excellent control and enough M-LOK slots to satisfy the most dedicated “accessorizer.” It definitely sheds the “low-profile” lines of the standard PC and shouts “tactical.”

The rear stock is made from a black, glass-filled nylon composition with a defined cheekpiece on both sides and a textured pistol grip. A really nice feature of the new PC is the LOP of the buttstock is adjustable from 12.6 to 14.12″ using the factory-supplied spacers. This carbine will pretty much fit the whole family.

The new aluminum receiver features an integral Picatinny rail, just perfect for advanced optics although the adjustable factory ghost-ring receiver sight is fast and practical. The blowback action is fully ambidextrous, with a reversible charging handle and magazine release, and, yes, the bolt locks open when the last shot is fired.

With an overall length of 34.37″, a 16.12″ threaded, fluted barrel and a weight of 7 lbs., the PC beaks down into two parts by simply toggling a recessed lever, twisting the forend/barrel assembly 90-degrees clockwise and pulling the two sub-assemblies apart. Likewise, the PC arrives fitted with an SR-Series/Security-9 pistol magazine well and a 10-round magazine. Also included is an additional magazine well for GLOCK mags while Ruger American Pistol magazine wells are available directly from www.shopruger.com. Pretty neat and very versatile! 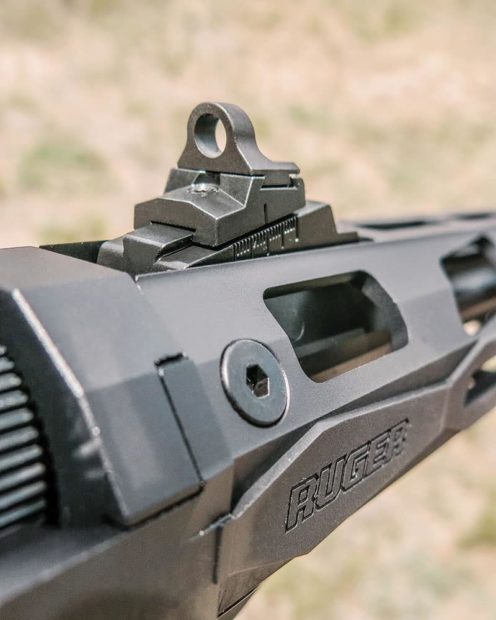 The factory aperture sight is very practical and fast on target. 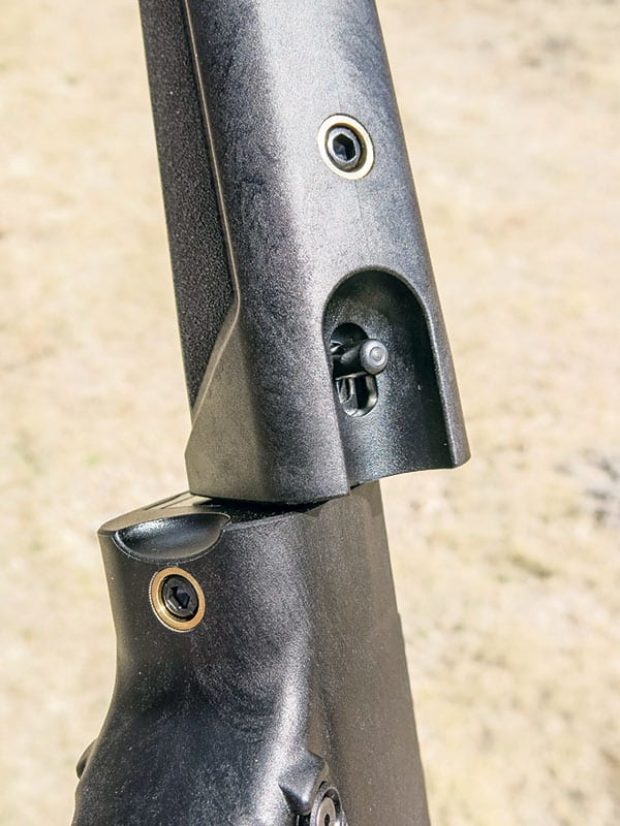 How did it shoot? I mounted a Bushnell Trophy 1x28mm red/green dot optic on the Picatinny rail and headed for the range with five different popular 9mm loads with bullet weights ranging from 115 to 147 grains.

First impressions? The crisp trigger was a delight to work with — averaging 5.5 lbs. on my Lyman gauge with a quick reset. It had great balance in the offhand position with minimal recoil and barrel flip. It fed a variety of hollow point designs without a hiccup.

Accuracy delivered at 50 yards for 3-shot groups averaged around 3 MOA using CorBon 90-gr. JHP +P, Federal 115-gr. FMJ, Hornady Critical Defense 115-gr. FTX and Remington Golden Saber 124-gr. BJHP. I thought I had, more or less, a 1.5″ gun until I fired Winchester’s 147-gr. load and got the tightest group of all at .710. The carbine’s 1:10 twist thrived on the heavier bullet, which proves how important it is to test a variety of bullet weights to determine any gun’s potential — although most 9mm’s will do just fine with the common 115-gr. loadings.

It’s great to see the thoroughly modern and refined PC carbine returning to the Ruger stable. It’s a family-friendly rifle, a plinker, a hunting gun and a reliable firearm for self-defense in the universal 9mm pistol caliber. MSRP for the model tested is $729.