Former President Trump adviser Sebastian Gorka says he has just the cure for what ails you.

The jury is still out. But he’s now the poster child for Relief Factor, a pain reliever. And like any potentially good thing, there’s a catch: the magic treatment — essentially an over-the-counter  fish oil supplement — can, in reportedly rare cases, cause unpleasant loose stool and nosebleeds. Another downer: It’s not Kosher and contains “trace amounts” of soy. But … the stuff is allegedly “molecularly designed” to remove mercury and other heavy metals from the wild caught mackerel, anchovy and sardine oil.

Before we continue, Gorka is not a M.D. He earned his PhD in political science from Cornvinus University in Budapest. He reportedly likes the doctor title.

Other pluses of the fish oil: No wheat; no gluten.

The cost isn’t exorbitant. For a three-week “quick start” you shell out only $19.95. 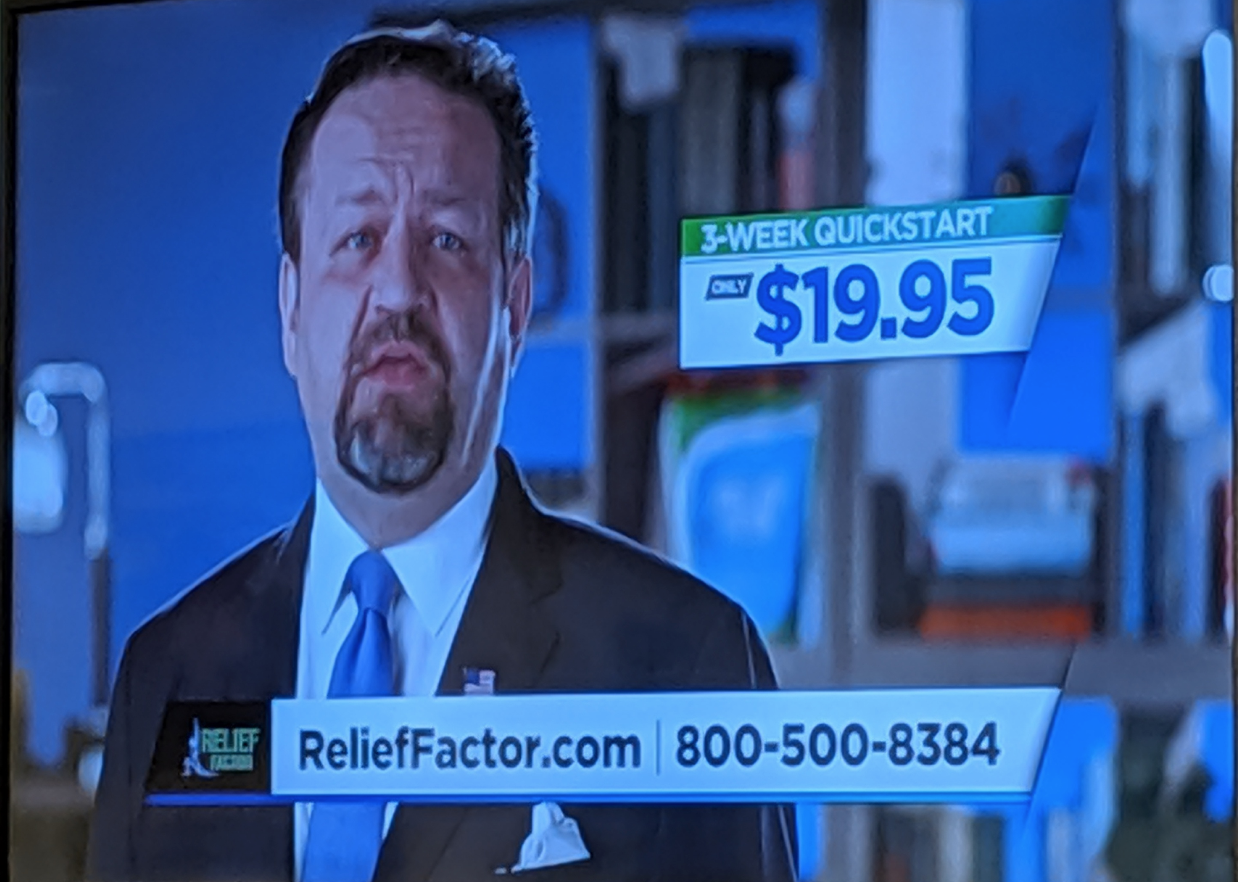 I’d love to chat with you about the pain reliever you’re repping as well as Brian Karem. I’d really like to hear your thoughts on both fronts. I’m wondering what category of hurricane you’d give Karem. Also pondering if White House reporters would benefit from using the pain reliever when dealing with Karem. Please let me know if it’s possible to talk with you for my story.

He replied by email, asking, “Is this a joke?”

I told him that no, this is not a joke.

But yes, I was attempting to be lighthearted in my pitch.

I have no idea if he’ll actually call me and answer my questions. (Fingers crossed, although he didn’t answer Mediaite‘s questions, so my hope is fading.)

Oh … wait. He wrote back again with this: “Email all questions.”

“I take it twice a day and am, as a result, pain free,” Gorka told The Mirror when asked about the supplement and Karem. “It’s ingredients are all natural and have no side effects, and are providing daily relief to tens of thousands of Americans each and every day. Unfortunately, it works on physical pain, not on external political irritants like FakeNews ‘reporters’ like [Brian] Karem.”

Gorka has always been a known figure in Trump World. But he put his name on the weird things happen in Washington map in the Rose Garden in July when he had a dustup with cantankerous Trump-hating Playboy White House correspondent Brian Karem.

“You’re a punk! You’re not a journalist, you’re a punk,” Gorka told Karem in his distinctive British/Hungarian accent at a press conference that came on the heels of a Social Media Summit that attracted a colorful cast of characters.

Some of these “influencers” — as they were called — began to bait mainstream reporters like Karem. At one point, Gorka took a photograph of the media and named it “Fake News panorama.” But it’s not as if Karem behaved like an angel. He remarked, loudly, “This is a group eager for demonic possession.”

Which obviously didn’t go over well.

Gorka approached him and the whole thing got ugly. “And you’re a journalist, right?” Gorka snapped. Karem challenged Gorka to a physical altercation — a conversation — outside the gates of the White House.

The White House press office suspended Karem for his bad behavior. But last week, Karem took the White House to court. This week a judge reinstated his press pass.

Asked about the court ruling, Gorka replied, “It’s absurd, but of course it’s an Obama judge. The idea that physically access to the Administration is a 1st Amendment right is laughable because that would mean every American should be issued to permanent pass to the White House. This issue is that Brian Karen behaves like a drunken punk not a journalist, and that it why he was banned. Insulting the President’s guests and then threatening me to a fight in the Rose Garden is reason enough to ban Karem for life.”

Does Gorka have any regrets about his own behavior that day in the Rose Garden?

“ZERO,” he wrote by email. “I’d do exactly the same again if necessary. Karem was a punk then, and he still is today. He’s no journalist.”

Listen to Gorka enthusiastically discuss Relief Factor on his radio program below.