Rep. Ilhan Omar deleted a tweet referring to her father as Nur Said — evidence that bolstered the case that her ex-husband, Ahmed Nur Said Elmi, is her brother. A spokesperson for the Minnesota Democrat said the name in the tweet was only a nickname, but other details contradict that explanation.

“Happy Father’s Day to my aabo Nur Said, I am forever grateful to Allah for giving me the best father a … ” the June 2013 tweet, which was deleted early Tuesday morning, said.

In Somalian culture, the father’s name becomes part of the son’s last name.

“Nur Said means ‘Happy Light’ and it’s been her dad’s nickname since he was a kid. He has a public page with the same name. She isn’t deleting it for the disturbing and hateful reasons that are being implied … ” the statement said.

There are at least three contradictions with that explanation.

In December 2016, a man named Suleiman Axoow wrote on Facebook: “On Wednesday night I had an opportunity to have dinner with State Representative-Elect Ilhan Omar & her lovely sis Leila Elmi.”

Leila’s 1997 marriage certificate shows that she lived in Camden, a neighborhood of London, and was 24 years old that year. It shows that her father’s name was Nur Said Elmi.

Omar’s ex-husband Elmi’s Facebook page, which the Daily Caller News Foundation archived June 23, shows he was attending the Haverstock School as a 12-year-old in the same neighborhood during that time period. The profile was deleted after the DCNF linked to it in a previous story. 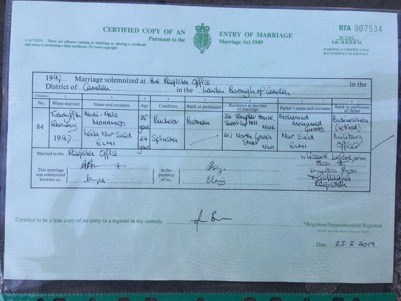 As part of her divorce in 2017, Omar swore under oath that she had not seen her husband since 2012, did not know any members of his immediate family and was not in contact with anyone who might know him.

A lengthy news profile that was the result of an extended interview with Omar listed her father’s name as Nur Said Elmi Mohamed before scrubbing it without explanation.

In October 2016, when Omar was running for the state legislature, she cooperated with the local City Pages for a lengthy portrait that appeared to come almost entirely from a one-on-one, in-person interview in which Omar gave her family history.

The article noted another correction at the end, but made no mention of changing the father’s name.

Alpha News published screenshots of the change and asked Zurowski why he changed the name, but Zurowski simply said: “I screwed up on the reporting end, hence the corrections.”

The City Pages did not return a request for elaboration from the DCNF.

Nur Said is on Facebook, where his friends comment on his posts exclusively in Somali and sometimes English, but never Arabic. Somali and Arabic do not even use the same letters. 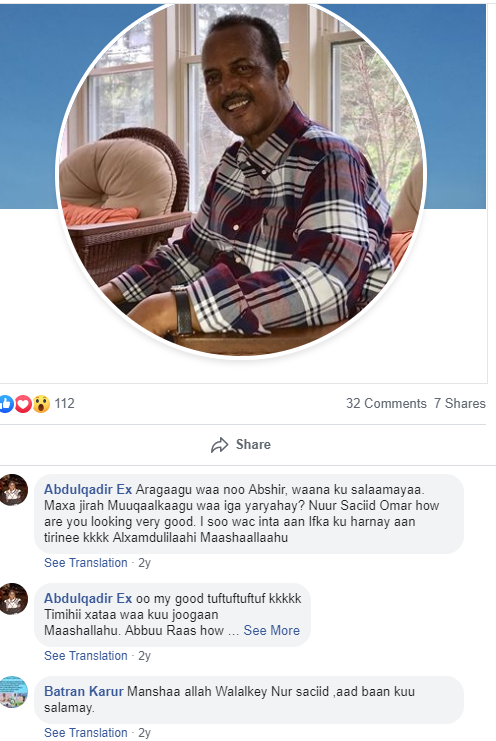 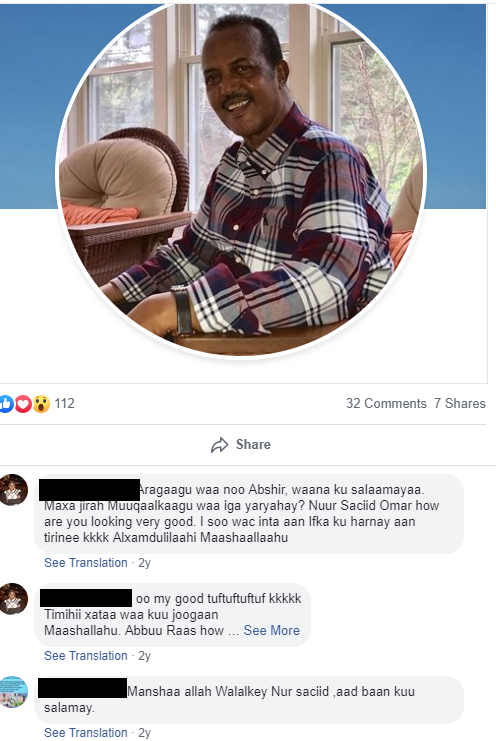 On Facebook, under languages spoken, Nur Said lists knowledge of Arabic and numerous other languages, but lists Somali first.

Ethnologue, an encyclopedia of languages of the world, says “Most Somalis [have] very limited or no proficiency in Arabic.” It said some two million out of the country’s 14 million can speak it.

Nur Said is a common name in Somalia, Executive Director of the Global Research Institute Shaul M. Gabbay told the DCNF. It is unlikely that someone would be referred to by a foreign phrase that happened to be a name in the local language, but was not the person’s name, he continued.

“Unlikely [it would be] used not as a name,” Gabbay, a former professor of international studies at the University of Denver, said.

“Somali is official and most of the population speak it,” he told the DCNF. He said that Arabic is also listed as an official language, but “almost no young know it or even of it.” He pointed out that it was more commonly understood in the 1950s and ’60s because of “Arab radio popularity then.”

It is unclear when Omar’s father was born.

But, according to City Pages’ profile, Omar’s grandfather was a high-level government official in the administration of Siad Barre, who in 1969 led a newly independent Somalia with a sense of nationalism and self-identity. Such a person “most likely would use Somalian” in his household, Gabbay said.

Omar’s spokesman did not respond to the DCNF’s questions about what her father’s given, official birth name is, and why a childhood nickname would not use the most intimate, colloquial language.