Ambassadors in the Trump administration dangled a potential face-to-face meeting with the president in an effort to compel Ukraine’s president to investigate a Ukrainian gas company linked to former Vice President Joe Biden’s son, according to text messages that House Democrats released Thursday night.

Kurt Volker, the now-former special envoy to Ukraine, provided the messages to three House committees before a marathon deposition he gave regarding his work as a middleman between Ukrainian government officials and Trump lawyer Rudy Giuliani.

The messages indicate that Volker and other U.S. diplomats were acting on President Donald Trump’s wishes in making the investigations a pre-condition to him meeting at the White House with Volodymyr Zelensky, the Ukrainian president.

The Democratic chairmen of the committees released the messages, saying they show the administration seemingly using leverage over the Ukrainians to “launch politically motivated investigations.”

They pointed to the text messages of Bill Taylor, the top diplomat to Ukraine, who they said expressed “serious concerns” over the pressure put on the Ukrainians.

Republicans blasted the late-night document dump, and Reps. Jim Jordan and Devin Nunes called on Democrats to release a transcript of Volker’s deposition in order to give full context to the text messages.

“Releasing these documents this late at night shows how worried the Democrats are. They know that Volker’s testimony today was a dud,” a GOP aide familiar with Volker’s testimony told the Daily Caller News Foundation on Thursday. (RELATED: Tucker And Patel: The Truth About Impeachment)

The messages show Volker conveying to other U.S. diplomats and a Ukrainian official that a meeting with Trump was contingent on Zelensky publicly committing to opening investigations that Giuliani had been pushing for months into Burisma Holdings, a gas company that had Hunter Biden as a board member. Giuliani has also pushed for an investigation into whether Ukrainian government officials helped Democrats in the 2016 election.

Zelenksy has not publicly announced any investigations. He and Trump met at the United Nations General Assembly on Sept. 25.

The first text message in the batch of documents released Thursday is one Volker sent to Gordon Sondland, the U.S. ambassador to the EU, following breakfast with Giuliani.

“Most impt is for Zelensky to say that he will help investigation — and address any specific personnel issues — if there are any,” Volker wrote to Sondland on July 19, six days before Trump and Zelensky had a now-infamous phone call at the center of a CIA whistleblower complaint. (RELATED: Read The Trump Whistleblower Complaint)

The whistleblower complaint, which was filed with the Intelligence Community Inspector General on Aug. 12, is what eventually led to Volker’s deposition and the subsequent release of his text messages. House Democrats are conducting an impeachment inquiry of Trump over his actions regarding Ukraine. The whistleblower said in the complaint that White House officials had expressed concern that Trump was improperly pressuring Zelensky to open politically-charged investigations of the Bidens.

On July 25, minutes before the call, Volker guided Zelensky adviser Andriy Yermak on what the Ukrainian leader should say in order to secure a face-to-face meeting with Trump at the White House.

US President Donald Trump and Ukrainian President Volodymyr Zelensky speak during a meeting in New York on September 25, 2019, on the sidelines of the United Nations General Assembly. (Photo: SAUL LOEB/AFP/Getty Images)

“Heard from White House — assuming President Z convinces trump he will investigate / ‘get to the bottom of what happened’ in 2016, we will nail down date for visit to Washington,” wrote Volker, who served as ambassador to NATO during the George W. Bush administration.

If there is a positive text message for Trump in the batch, it is Yermak writing to Volker that the call “went well.”

According to a transcript of the call, Trump congratulated Zelensky on his election win in May and touted how much aid the U.S. gives Ukraine, especially compared to European countries. Zelensky brought up Giuliani, noting that the former New York City mayor had been in contact with his advisers.

Trump then asked Zelensky for a “favor” investigating whether Ukraine has a DNC server that U.S. authorities say was hacked by Russians.

Trump brought up the Biden family later in the conversation, asking Zelensky to look into whether Joe Biden pressured Zelensky’s predecessor to fire a prosecutor investigating Burisma Holdings.

“So if you can look into it,” said Trump, “it sounds horrible to me.”

The conversation ended with a friendly exchange, and Trump invited Zelensky to the White House.

But two weeks after the call, a meeting had not been scheduled. The diplomats suggest in the texts that the meeting had been stalled while a plan was hatched for Ukraine to commit to corruption investigations.

“I think potus really wants the deliverable,” Sondland wrote to Volker on Aug. 9.

The messages also show that Volker took the initiative to guide Zelensky on what to say to appeal to Trump.

“Can we all get on the phone to make sure I advise Z correctly as to what he should be saying? Want to make sure we get this done right,” he wrote Giuliani on Aug. 9.

Yermak, the Zelensky aide, suggested that the Ukraine side was on board with holding a press briefing announcing a meeting date as well as an investigation into Burisma and Ukrainian election meddling.

“Once we have a date, will call for a press briefing, announcing upcoming visit and outlining vision for the reboot of US-UKRAINE relationship, including among other things Burisma and election meddling in investigations,” he wrote Volker on Aug. 10.

Volker provided input on Aug. 13 on how to craft the statement, writing that “Special attention should be paid to the problem of interference in the political processes of the United States especially with the alleged involvement of some Ukrainian politicians.”

“I want to declare that this is unacceptable. We intend to initiate and complete a transparent and unbiased investigation of all available facts and episodes, including those involving Burisma and the 2016 U.S. elections, which in turn will prevent the recurrence of this problem in the future.”

Volker reiterated four days later that the Ukrainians’ statement had to include references to Burisma.

“Do we still want Ze to give us an unequivocal draft with 2016 and Boresma [sp]?” Sondland asked in an Aug. 17 message.

Up to that point, the only leverage mentioned by the diplomats is a Zelensky meeting with Trump. But a series of events that unfolded at the end of August led Taylor, the chargé d’affairs to Ukraine, to question whether the administration was also using military aid as a bargaining chip to force an investigation of Burisma.

On Aug. 28, Politico reported that Trump was holding up hundreds of millions of dollars in military aid to Ukraine to review whether the funding was in the best interests of the U.S. A day later, Taylor messaged Volker and Sondland of Trump’s trip to Poland, where he was to meet with Zelensky. The White House said the trip was cancelled because Trump wanted to monitor a hurricane aimed at the Florida coast. Vice President Mike Pence made the trip instead, and met with Zelensky.

“Are we now saying that security assistance and WH meetings are conditioned on investigations?” Taylor wrote to Sondland on Sept. 1.

The next set of messages begin on Sept. 8, with Taylor seemingly threatening to resign if a plan involving an “interview” did not lead to Ukraine receiving the military funding.

“The nightmare is they give the interview and don’t get the security assistance. The Russians love it. (And I quit.)” Taylor wrote, without describing the interview in question.

“The message to the Ukrainians (and Russians) we send with the decision on security assistance is key. With the hold, we have already shaken their faith in us. Thus my nightmare scenario,” Taylor fretted the next day.

He then wrote that he was counting on Sondland “to be right about this interview.”

Sondland said in apparent reference to the unspecified interview that it was “the best pathway forward.”

“As I said on the phone, I think it’s crazy to withhold security assistance for help with a political campaign,” said Taylor.

“Bill, I believe you are incorrect about President Trump’s intentions. The President has been crystal clear no quid pro quo’s [sic] of any kind. The President is trying to evaluate whether Ukraine is truly going to adopt the transparency and reforms that President Zelensky promised during his campaign,” he wrote. 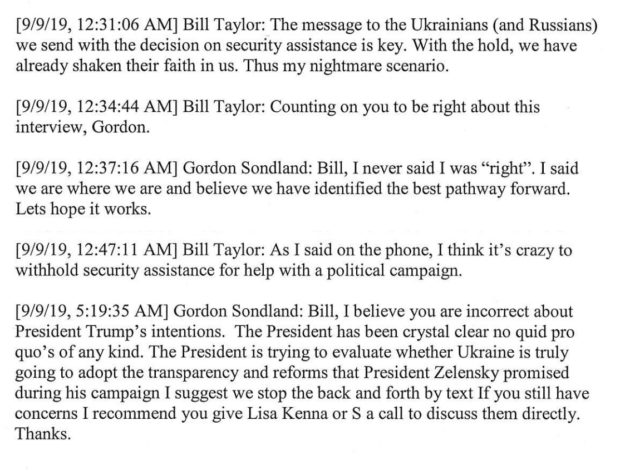 That same day, the Intelligence Community Inspector General sent a letter to the House and Senate Intelligence Committees notifying them about the whistleblower complaint. On Sept. 12, the White House cleared military aid to Ukraine.