The pro-Trump group Women for America First said U.S. Coachways canceled its charter bus trip and left them stranded, but the bus company said there’s more to the story.

Women for America First Chair Amy Kremer said in a Thursday statement that “less than two hours before our first chartered buses were supposed to leave for D.C., we were informed that the bus company was cancelling all of our buses — including ones that were fully paid for.”

“This move left hundreds of grassroots activists stranded and unable to attend the Anti-Impeachment rally today in front of the Capitol,” Kremer’s statement continued. “We are incredibly disappointed at U.S. Coachways, their actions prevented hundreds of Americans from exercising their first amendment rights and to have their voices heard.”

Tomorrow ”Women for America First” will be marching around D.C. & roaming the halls of the Capitol trying to find Pelosi, Schiff, & Nadler… pic.twitter.com/1tuOdzzC1t

Heap said the woman in charge of ordering six buses for the group, which was planning a Thursday visit to D.C. for an anti-impeachment rally, started communicating with an agent from U.S. Coachways on Oct. 7.

“When she first spoke to our agent, the agent said, ‘Yes, we can do this, and you should book as soon as possible,'” Heap continued. “She didn’t book, but she continued to talk about the itinerary even though there was no official booking or deposit. Her particular charter was complicated because there are certain [Department of Transportation] regulations. We had to make sure there were two drivers for [each] bus and certain laws were followed.” 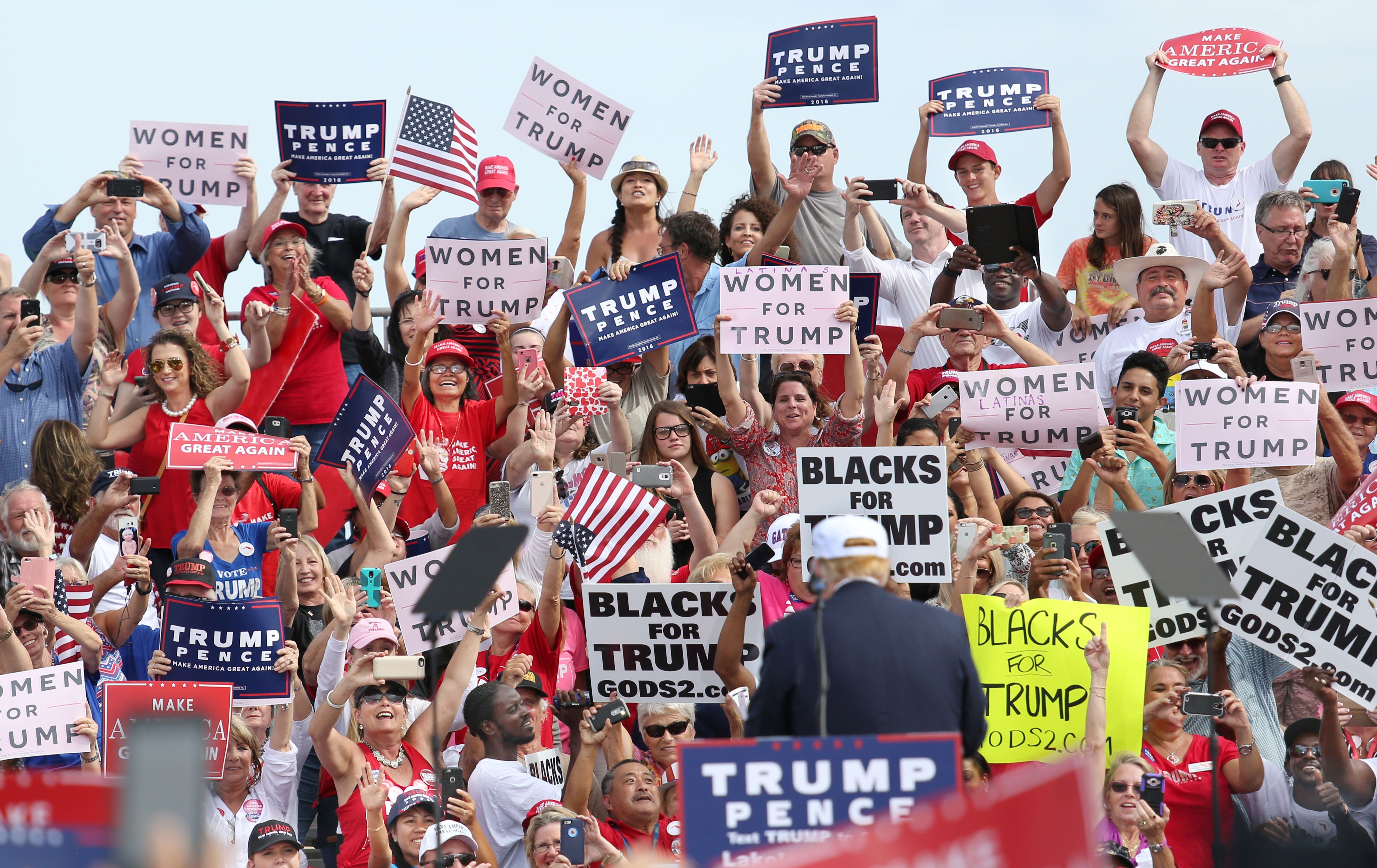 Republican presidential nominee Donald Trump is cheered on by supporters during a campaign stop inside a hangar at Lakeland Linder Regional Airport in Lakeland, Florida on October 12, 2016. (Photo credit should read GREGG NEWTON/AFP/Getty Images)

He said over the course of several conversations with the woman who was in charge of planning Women for America First’s trip, she never officially booked any buses, even though the agent continued to advise her to book the trips.

The Women for America First organizer waited until 3 p.m. on the same day and eight hours prior to the time she and her group were planning to leave for the D.C. rally, according to Heap.

“That was fine,” he said. “We were working with her in good faith. Unfortunately, her credit card was being declined, which is the part I think [the Women for America First organizer] left out of her social media posts.”

This bus company let the anti-impeachment crew order multiple interstate buses on 8 hours notice — that’s less planning than you put into the hotel shuttle at a wedding! But they refused to work for free on a $10K+ job, so now they’re part of the deep state or something.

“Now, we’re dealing with blowback on social media saying that we’re against [President Donald] Trump and so on and so forth, which is the farthest thing from the truth,” he said. “We don’t take political sides one way or another. We are a logistics company. Our job is to get our people from Point A to Point B safely and on time.”

Heap said a U.S. Coachways agent actively worked with the Women for America First organizer to “try and clear her credit card” so she could use it to book the six buses she was planning to order, and one of the charges “finally did go through, but the rest of them wouldn’t.”

“Because they were all different buses from all different areas, they had to be charged separately,” Heap explained. “Well, unfortunately, if we don’t get paid, we can’t do the job for free. We really did try to work with her, and we really did want to make this trip happen. This is what we do. This is our bread and butter.”

Heap also told the DCNF that U.S. Coachways has done “multiple” political bus trips of this nature: “We’ve done rallies whether they be pro or con. We really don’t care.”