Since its release in 2015, Glock has sold more than a million Slimline G43 single-stack, subcompact 9 mm Luger pistols. Despite the gun’s popularity, there are two features some customers desired to see modified. First, the pistol has a relatively low six-round capacity. Secondly, the short grip frame, while easy to conceal, does not provide a full three-finger grip for larger hands.

To address both of these issues, Glock has released the G48 pistol, which sports a taller frame (5.04″) that permits a more secure grip on the gun while also accepting a 10-round detachable box magazine. The G48’s barrel has also been lengthened to 4.17″, for an overall length of 7.28″. This longer slide configuration meets certain export regulations while giving the G48 the same slide length and grip frame height as one of Glock’s most popular double-stack pistols, the G19.

The G48’s slide length and grip frame height are identical to those of Glock’s venerable double-stack G19, while offering a slightly longer barrel and a thinner profile. The gun is now available in all-black and two-tone finishes.
–

Earlier in 2019, the company released a version with the slide treated with a matte-silver nPVD finish for a handsome two-tone look, but our sample for this review is the newer all-black variant with an nDLC treatment on the slide.

Like the double-stack 9 mm Glock models, the G48 is a polymer-frame semi-automatic. The G48 operates using the same striker ignition system, short-recoil operation, locked-breech barrel and Safe-Action trigger as found in other Glocks. This model is manufactured in Austria and imported through the company’s Smyrna, Ga., facility. Our sample pistol tipped the scales at 20.6 ozs. with an empty magazine installed. The nose of the slide is beveled, with wide, vertical cocking serrations located under the front and rear sights. The sighting system is Glock’s standard variety, with a polymer white dot in front and a drift-adjustable, polymer white-outline-notch unit in the rear.

The barrel is cut with polygonal rifling, which means the use of unjacketed lead bullets should be avoided. The extractor is shaped to act as a visible and tactile loaded-chamber indicator. Removing the slide assembly from the frame reveals a Gen4-type recoil assembly fitted with dual captured recoil springs, a polymer guide rod and four steel rail segments for the slide.

The compact polymer frame features a slight beavertail to protect the shooting hand from slide bite. The trigger guard features a textured finger rest along the front edge and is undercut where it meets the grip frame for improved control. The space within the trigger guard, the trigger itself and the trigger stroke are the same as the double-stack models.

Our test sample’s trigger had a slightly mushy take-up before the break, followed by a short reset. The trigger pull measured 5 lbs., 7 ozs., on a Lyman Digital Trigger Gauge, making it 1 oz. lighter than the listed trigger weight. The slide stop lever and magazine release are located in their usual left-side positions. The magazine release button is reversible for left-handed shooters.

The front of the grip is flat (no finger grooves), and flares out slightly where the bottom of the grip meets the magazine floorplate. This pistol does not have interchangeable backstraps like the larger Gen4 or Gen5 models, but it does have subtle thumb rest ridges on each side. All four sides of the grip feature a light texturing consisting of small, blunted, pyramidal bumps. With the longer grip that supports all of the fingers, this texture is sufficient for positive purchase. The 10-round polymer magazine is steel-lined with a bright orange follower and witness holes.

The G48 performed as expected at the shooting range, which is to say, with the no-fuss-no-muss reliability for which Glock is famous. There were no mechanical or ammunition-related issues throughout the entire test process. The longer barrel does squeeze a bit more velocity out of the ammunition, compared to the G43, while balancing nicely for two-handed shooting. 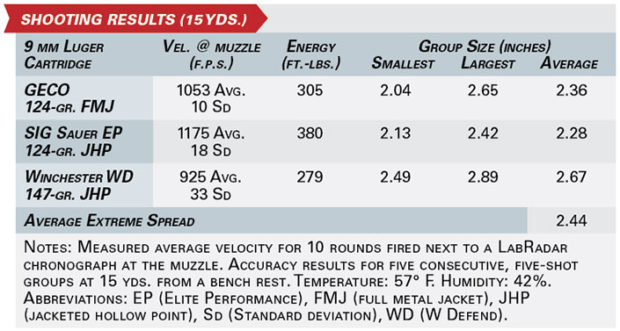 –
Any lingering complaints about Glock’s traditionally thick, blocky grips don’t apply to this model. In fact, the single-stack Slimline grip has earned praise as one of the most comfortable and universally compatible grips for a variety of hand shapes that the company has produced.

The G48 is a well-balanced, lightweight pistol that is comfortable to shoot and carry. While the quality and reliability of Glock pistols has remained constant for more than three decades of production, there have been times when the company was more focused on meeting military and law enforcement contracts than contributing to the civilian marketplace. The G48, however, shows that Glock is listening to its civilian customers these days, and striving to meet their requests. 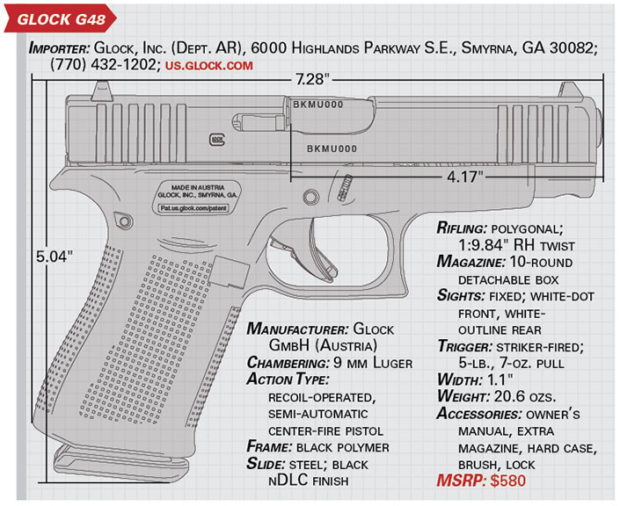