Over the past few weeks, a new face of the resistance to Donald Trump’s presidency has emerged.

Lt. Col. Alexander Vindman set off fireworks in the nation’s capital late last month when he testified about Trump’s now infamous phone call with Ukrainian President Volodymyr Zelensky. So, who is Alexander Vindman?

Ironically enough, the 44-year-old Vindman was born in Ukraine when it was part of the Soviet Union, and left the country along with his father and twin brother at the age of three. From there, Vindman moved to New York, where he graduated from Binghamton University. Vindman later enlisted in the U.S. Army, where he was awarded a purple heart after being injured by a roadside bomb during the Iraq War. In addition to his purple heart, Vindman also won numerous other honors for his service, including the Ranger Tab, the Combat Infantryman Badge, four Army Commendation Medals, and two Defense Meritorious Service Medals, along with numerous other honors. 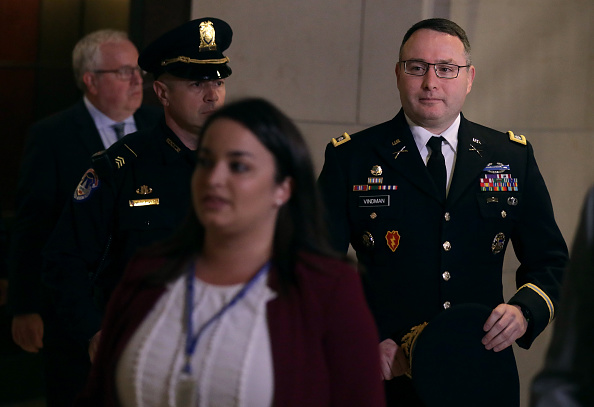 Vindman was promoted to the rank of major in 2008, and to the rank of lieutenant colonel in 2015. Additionally, Vindman has significant experience as a diplomat, and has served in U.S. embassies in Ukraine and Moscow. Vindman served at the Pentagon from 2015-2018, before transitioning to the White House as part of the National Security Council. Vindman’s Ukrainian heritage has clearly played a role in his activities in the White House, and he was one of a handful of U.S. government officials to attend Zelensky’s inauguration, including former Secretary of Energy Rick Perry, U.S. Special Representative to Ukraine Kurt Volker, and European Union Ambassador Gordon Sondland, all of whom are now front and center in Ukrainegate and the impeachment of Trump. (RELATED: House Democrats Vote To Open Impeachment Inquiry)

Supporters of the impeachment probe will argue that Vindman’s distinguished record of service makes him above reproach, while Trump and his supporters argue that Vindman is part of a vast network of bureaucrats and national security officials frustrated by a president who continues to challenge the foreign policy status quo in Washington. The President recently assailed Vindman’s motivations, calling him a “Never Trumper.”

During Vindman’s testimony at the end of last month, he accused “outside influencers” of having “undermined U.S. efforts to expand cooperation with Ukraine.”

“In Spring of 2019, I became aware of outside influencers promoting a false and alternative narrative of Ukraine inconsistent with the consensus views of the interagency,” Vindman testified.

Vindman’s testimony was followed by a bombshell report Friday in The Washington Post, which reported that Vindman was “deeply troubled” by Trump’s attempts to “subvert U.S. foreign policy,” providing major fodder for pundits and politicians who question Vindman’s motives.

“[Vindman] told lawmakers that he was deeply troubled by what he interpreted as an attempt by the president to subvert U.S. foreign policy and an improper attempt to coerce a foreign government into investigating a U.S. citizen,” The Post reported. (RELATED: Washington Post Gives Schiff Four Pinocchios For Whistleblower Claim)

Vindman’s testimony as well as The Post’s report lends credence to the idea that the real gripe Vindman and other national security officials have with Trump is that he has gone against the grain of U.S. foreign policy. If Vindman did accuse Trump of attempting to “subvert U.S. foreign policy,” that would demonstrate either a lack of understanding of the U.S. Constitution, or a lack of respect for the American people. After all, it is the commander-in-chief who has the authority to set and conduct U.S. foreign policy, not un-elected national security officials like Vindman. (RELATED: Adam Schiff Accuses Trump Of ‘Mafia-Like Shakedown’ Of Ukrainian President)

Whether or not one agrees with the president’s decisions to pull out of Northern Syria or the Iran Deal, or his brash, public criticism of NATO allies, that should have no bearing on the impeachment process. Vindman’s comments suggest that it might. Trump has spent his entire presidency clashing with career public officials such as Vindman, who have staunchly opposed the president’s “America First” foreign policy, which appealed to voters in the 2016 presidential election, but is considered anathema to the foreign policy establishment in Washington D.C. These same officials who have spent years fighting Trump on foreign policy are now testifying in his impeachment proceedings, but disliking a president’s foreign policy is not a reason to impeach him. (RELATED: President Trump Announces Death Of Another ISIS Leader)

With the emergence of Alexander Vindman, the effort to take down this president has a new face and the resistance has its new hero.